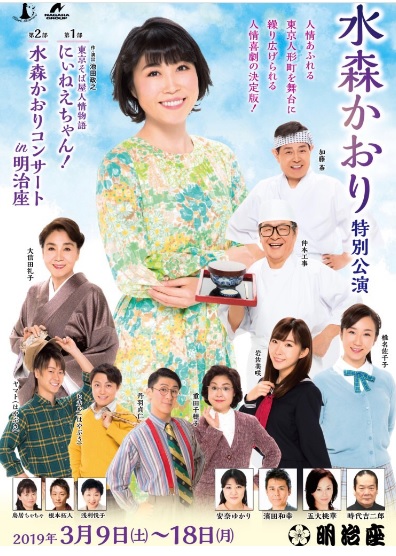 Wasamin is developing quite the acting resume. This is the third year in a row that she has performed in a Meiji Theater play. The first two were part of the Umezawa Tomio performing troupe where she acted alongside noted enka artists Tegawa Toshimi and Ken Naoko. This time she would be acting alongside her main senpai Mizumori Kaori, who Wasamin has developed quite the friendship with over the years due to both of them being part of the Nagara Pro enka stable. Not to mention Wasamin acts as Kaori’s sidekick on her monthly travel show Mizumori Kaori no Sagase! ~Zenkoku Uta Jimon~ 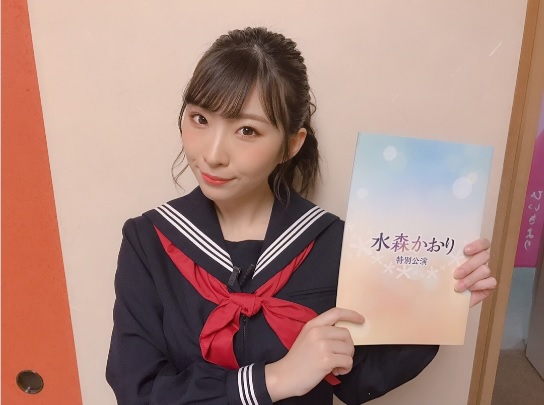 The play runs from this past weekend through next weekend, and then will be performed for two weeks in May, in Nagoya and at Shin-Meiji-za in Osaka. So Wasamin is going to be quite busy acting in the coming months, and she has a couple of big Nagara Pro ensemble concerts coming in April. Anyway… 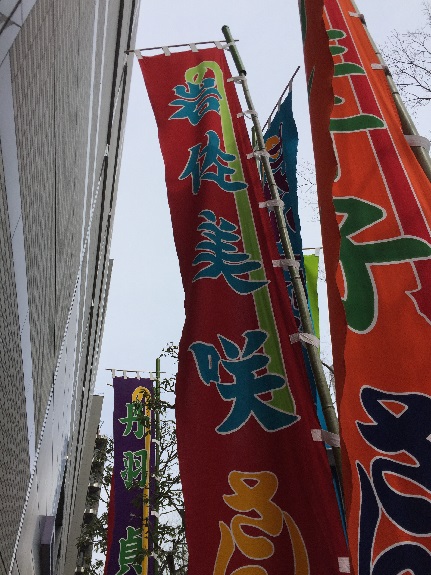 I waited a bit before pre-ordering any tickets since they originally went on sale right around the time I was paying for a bunch of other Wasamin events, and I was feeling a bit overwhelmed at the time. It wasn’t until around a month ago I finally pulled the trigger, deciding on the matinee performance on the 2nd day. The thing about Meiji-za is that the tickets are rather expensive, unless you want to sit in the top balcony, where they are like 1/3 the price. Luckily, I got a ticket close to the center, in the second row (There are only two rows up there, lol) Last month Wasamin asked me which show I was coming to, and I told her “The 10th,” but I forgot to mention the matinee. So I was sure to tweet at her when I arrived, so hopefully she would know I was in the audience. Since I arrived around 10-minutes before curtain, I didn’t have time to check out the shopping booths. I went directly to the top floor and found my seat. There was a cluster of Wasamin fans in the first row of the balcony, and another group on the far left side. 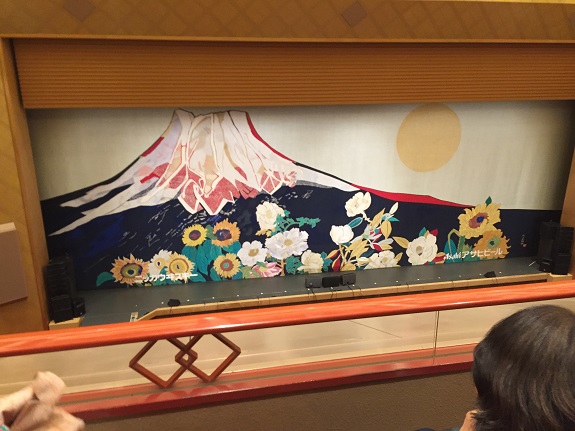 The entire program was around 3 1/2 hours, with a 40-minute intermission sandwiched in the middle. Part one was the aforementioned play, which was a screwball comedy set in 1964 in the months leading up to the Tokyo Olympics. Kaotan (Mizumori Kaori) has returned to her hometown to take over the Soba shop once run by her now-deceased parents. Working with her are her two bratty younger sisters, played by Wasamin and fellow Enka singer Shiina Sachiko. At first she is horrible at making Soba, but with the assistance of some local friends she improves. Meanwhile, they have to overcome various adversities, including someone trying to take away the shop. 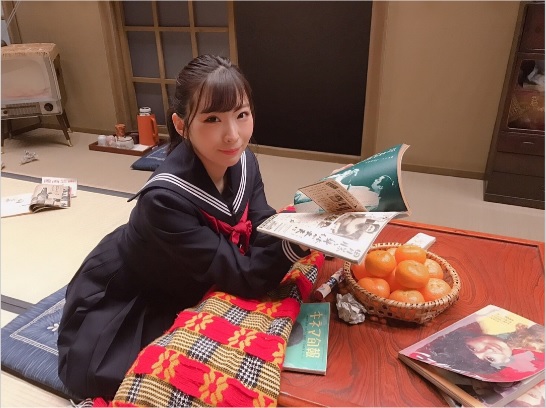 Wasamin, despite being 24, pulls off “high school girl” quite well. I’m not sure how old Sachiko’s character (the middle sister) was supposed to be, but she is 36 in real life, so… Ultimately, the story was relatively easy to follow, despite me not getting some of the plot subtleties, and I am not a huge fan of Japanese comedy, so some of the physical comedy fell kinda flat for me. On the other hand, it was a joy to watch Wasamin perform, and I was glued to her every action on stage. Her reactions were great. Moreover, the cast has a lot of veteran actors in it, so the performances were all very good. I should also note that both Yamato and Hikaru from Hayabusa were in the show too, so there were four people I have met in the cast. The play itself was around 80-minutes, then came intermission… 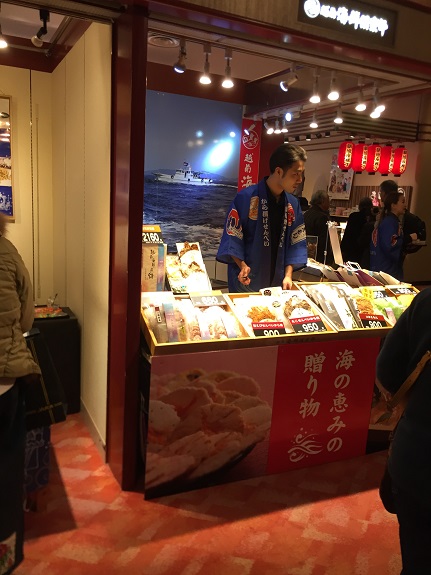 There are two restaurants in Meiji-za, the most popular being a prepaid lunch you had to buy with your ticket, or by being a “member” of the theater. There is also a less formal cafe down on the second floor. I instead decided to visit the “goods” area. I say goods, but there is a lot more going on there. In addition to souvenirs, there are scores of senbei, mochi, sweets, and other fruits and veggies. The theme of the goods area is Historic Tokyo, as if you have been transported to 100 years ago. Most everyone is wearing a Yukata, and they are not shy about trying to bring you over to their booth to try the goodies they are selling. Nagara Pro also had a large booth selling goods for Wasamin, Kaotan, and Hayabusa. 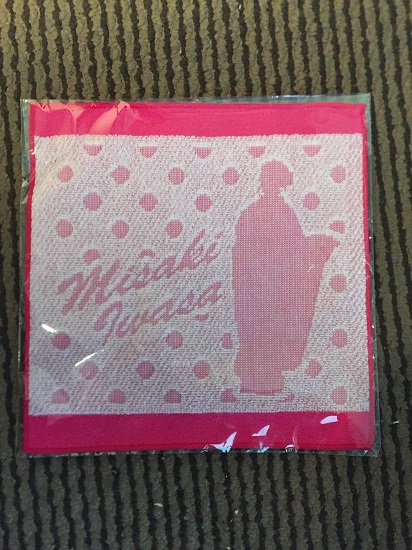 I only saw one new item in the Wasamin section, an oshi-towel, which I picked up. According to Wasamin’s blog there were two other items on sale as well, 1-shot chekis and a pin set, but I didn’t see them. I would’ve picked up the pin set had I seen it. However, this time I did pick up a few food items, and tasted a bunch of other stuff too. There was a senbei set with a picture of the cast on it, but it looked kinda plain. I like more adventurous stuff like…

Ikaemon, which are basically the same as those fresh made crackers you can buy on Enoshima Island in Kanagawa Prefecture. I also picked up Curry flavored fried beans, and spicy dried green beans. After picking up an overpriced soda (their vending machines are a tremendous rip-off, LOL) I headed back to my seat for part two of the program…

Kaotan came out in a long, flowing dress, and sang two songs. That’s one of the interesting things about Mizumori Kaori; despite being an enka singer, I don’t think she ever performs in a kimono. She’s always wearing a dress of some sort. It was the same the two times I saw her at a mini-live too. The other unique thing about Kaotan is the way she reacts to applause after a song, she jumps up and down like a little kid.  It’s really cute!

From there Wasamin, Sachiko, and Hayabusa all joined Kaotan on-stage. After talking for a little while, the supporting singers performed a medley. From there each of them sang their latest singles, Wasamin performing Koi no Owari Sangenjaya. Kaotan finished the show with a new dress, and four more songs, including a sing-a-long at the end, which all the singers joined her on-stage for.

I did one last once-around in the goods area before finally heading back to the train station and home. However, after I left Wasamin announced that she would be appearing at her goods booth selling CDs. Shit! Had I known I would’ve stuck around. Not to mention I was at the booth after the show and they didn’t mention a thing to me about it. She must’ve appeared right after I left, too. Oh well, unless I decide to see the show again next weekend, the next time I will see Wasamin is at her cheki event on the 23rd of this month, so I will have to tell her about my experience then. 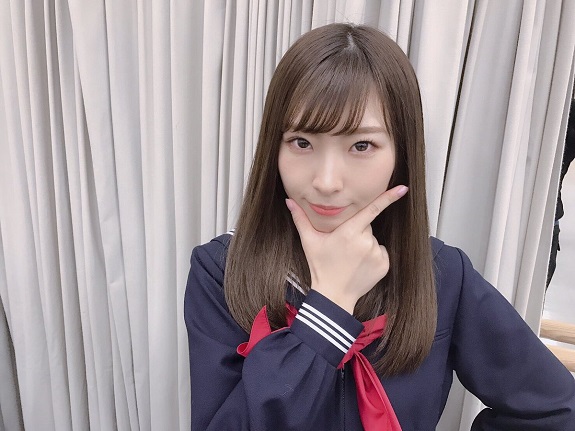 Overall the show was a lot of fun. I enjoyed it a bit more than the Umezawa Tomio performances, but that is mainly because a) Wasamin had a much bigger role in this play, and b) I didn’t have to endure an additional hour of dancing. So yeah, maybe I will buy another ticket for this coming weekend. I’ll think about it.