So while most everyone I know was heading south to Yokohama for the big Sasshi graduation concert, I headed in the other direction for the late-afternoon Wasamin live event in Saitama. But that wasn’t the original plan…

When the weekend events at Yokohama Stadium were announced, I had pretty much decided from the get go that I was only interested in the Sunday concert. The Saturday festival seemed like a lot of confusion to me. Moreover, most of the members I like weren’t even going to be there. Then Minyo Girls announced that their April one-man live would be a graduation for Kakotan, one of the original members. I thought “What the heck, I could still make it to Yokohama afterwards.” But then Wasamin announced her events this weekend. I knew that I couldn’t go to her scheduled Monday event at all without eating a whole bunch of tickets I have lined up for the AKB handshake event. So I ultimately decided to blow off applying for Sasshi’s show, and just go to see Wasamin after the Mingaru live. Saves me 9000 yen, and the headache of watching another stadium concert, which if you weren’t aware, I am not a fan of for a myriad of reasons. 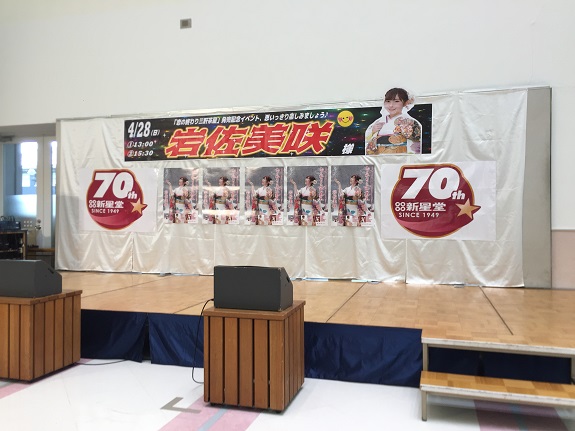 I took my time heading to Saitama since the second show wasn’t starting for over two hours. I have been to this mall a few times before. It isn’t far from where I live, but the walk from the station is a bit of a pain. Nevertheless, I made it in time, and sat down for a late soba lunch before heading to the event area. They hadn’t yet reopened the sales table yet, so I grabbed an available seat in the second row, briefly chatting with a couple of the Wasafans who were asking me if I was at Yokohama Stadium the day before. Eventually I went to buy my CDs (I planned on three) but noticed that they had them mis-priced. So I told the staff that they have an issue,which they fixed. But I got my CDs and tickets, I was good to go. Here are both of the day’s setlists, despite me only being at the second event…

First of all, this mall is notorious for having really bad sound. The area where they do the lives has a very high, cathedral-like ceiling, and the sound bounces all over the place. Furthermore, Wasamin’s mic was FAR too loud, and the music too low. And if that wasn’t enough, they were having feedback issues. Ichikawa-san (Wasa-manager) was running back and forth trying to get the guy running the board to fix it. And then, after the first song Wasamin turned to the guy and was like “Uhhh, I think there’s a problem with the sound.” Eventually they got the mic turned down, and the feedback went away, but the music was still too low.

Wasamin said at one point that she was happy to see a lot of her regular fans. She is aware that a significant percentage of her fan base has followed her from her AKB days, and there is always a risk of us not showing up when there is a major AKB concert of handshake event. I was also surprised, as there were quite a few people there that I thought for sure would be at Sasshi’s graduation. There were a few AKB/Wasafans missing, but not as many as I expected.

As I mentioned, I had three tickets, good for one two-shot, and a regular handshake. I was fairly close to the front of the line for my first meeting, where I immediately told Wasamin I had finally graduated from University. We got all into that conversation, when the staff taking the photo was like. “Time to pose…” 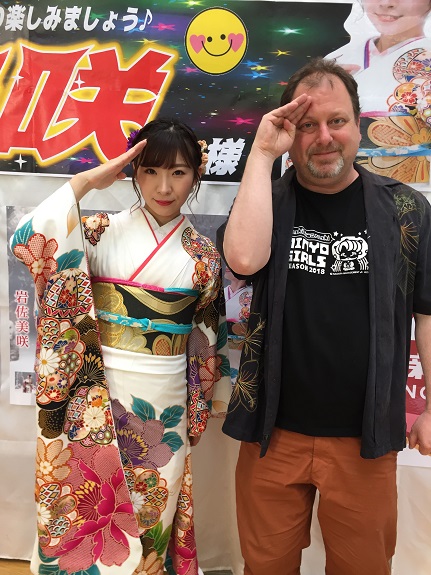 Admittedly I do not put much thought into the poses. I think of the two-shots as more of a visual record of the event. Anyway, she asked me why I wasn’t at the first event, and I admitted that I was at the Minyo Girls live. Now that could spark a little jealousy, but they are Wasamin’s kouhai group, and she was aware that Kakotan was graduating, which she said she was sad about. I also mentioned that I wanted to show the Mingaru staff the article I wrote, so she was okay with it. She went on to ask me what I was going to do now, to which I explained that I need to find a job to stay in the country. She was surprised that I already had job interviews. In any case, my time had been up for a while, so I finally broke away. I had another ticket anyway…

At this point the line was really long, so I dismissed myself to get a drink, and came back a little while later when the line got a bit shorter. This time I wanted to finally talk to her about her appearance on Utacon. So I told her that I loved her trio with Sayanee and Mizumori Kaori. Oh, and she always gets a big kick out of me calling her Mizumori-san. But I’m sorry. I know her nickname is Kaotan, but there is another Kaotan in my life, so I just can’t bring myself to call her that. Anyway, I told her where I had sat for the show in hopes that she might say she spotted me, but instead she simply asked me if I was calling for her during the show. Of course I was!

I was done with my tickets, but was in no hurry. So I decided to wait it out until her ‘goodbye’ at the end. It was only like a half hour or so. But that wasn’t the end of the fun…

As I was walking through the mall, I noticed Wasamin coming around a corner right toward me. Now there is sort of an unwritten rule that were aren’t supposed to engage with Wasamin when she is not ‘performing,’ so me and a few other fans started walking faster, and then turned away from the exit since we figured that was where she and Ichikawa-san were heading. Suddenly I hear giggling behind me, and Wasamin begins calling out “Kurisuuuu!!” I turned, smiled, waved, and just kept going, LOL. She was laughing the entire time. She knows that we do our best to give her space, but I have a feeling even she might think that we take it too seriously sometimes. At the same time, I have seen her in situations like this where she didn’t want to be engaged. So it is always best to let Wasamin ‘make the move,’ so to speak.

So with Wasamin heading out to Osaka and Nagoya over the next three weeks or so to perform her play, I’m not going to get the chance to s here until probably the end of May at the earliest. Hopefully I will have my new visa status all ironed out by then.