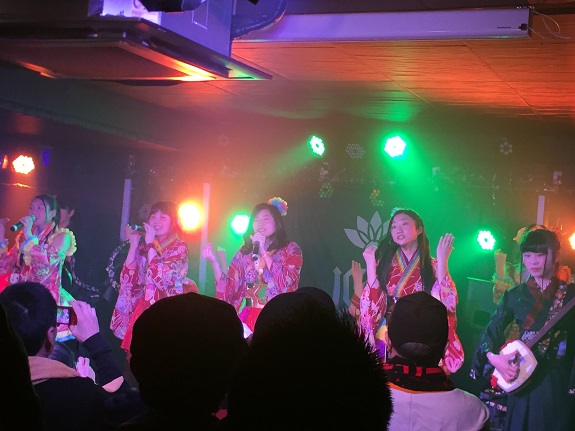 This has become my traditional monthly visit with the Mingaru, their 1-man live which for this month temporarily moved to a new location. They started their one-man live series at Asakusa Gold Sounds, which is a nice little venue. Then late last year they began holding them at Shinjuku Marz, which isn’t bad. After all, it is probably the most conveniently located, but it can get a bit tight inside the venue when they start doing Buppan, like there is no place to stand where you aren’t in the way of something. Not to mention, it is kind of a musty basement. Yotsuya Lotus is also a basement venue, (actually all three of them are) and by comparison of the other two is much smaller. This would cause some major headaches when it came to buppan, but I digress…

One nice aspect of this show was that I was again going to meet my friend David, who had notified me that he purchased a ticket as well. The station by the venue, Yotsuya Sanchome, was not convenient for me to get to, so I went to the next closest station, Akebonobashi, and walked for around 10 minutes. I was a little early, so I hung out in Cafe Velocce for a little while until it got closer to doors.

The staff at the venue were a little disorganized, they let the first 50 people into the venue stairwell to queue, and then made no effort to put us in proper order, instead just making sure we weren’t blocking them from going up and down the stairs. I had ticket #46, so I just hung toward the end of the line. Once I got into the venue I saw how small the bar and sales table area was, so I went immediately into the stage area to camp out a spot. I figured David would probably prefer to be toward the back, so I grabbed us a spot on the rear right side. However, unlike Shinjuku Marz where there is a lot of standing space, Lotus was much smaller, meaning that the fans would be crowded all the way to the back wall. In fact, I was worried I would lose the spot I was saving for David, but he eventually came in. They had also cordoned off an area on the right for the members to stand in during the VTR portion of the show, making the standing area even smaller. 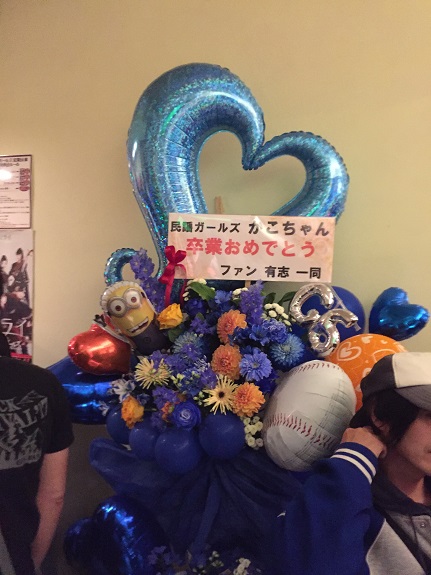 I chose not to wear my Happi, but I was wearing orange, which was the color they requested the fans wear since this was Kakotan’s final show as a member. Plus I had plenty of lightsticks, including those provided by the graduation committee. I was also asked to sign the graduation book as well. 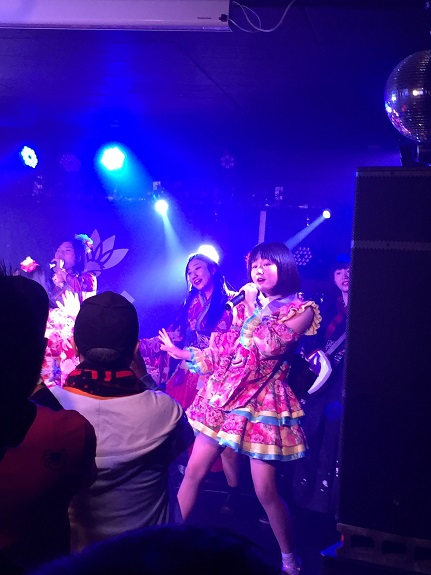 Just before curtain, I looked over by the door where most of the parents were standing, and I noticed Izumi, the member who graduated last month, standing among the moms. There were a few other teenage girls over there as well. At first I thought they where the other graduates, but I didn’t recognize anyone in particular. Since the show was dedicated to Kakotan’s graduation, it wasn’t a surprise that they generally stuck to a more traditional set. In fact, they performed a lot of their old songs since Kako seems to do better with the minyo/enka style than she does with the pop stuff. 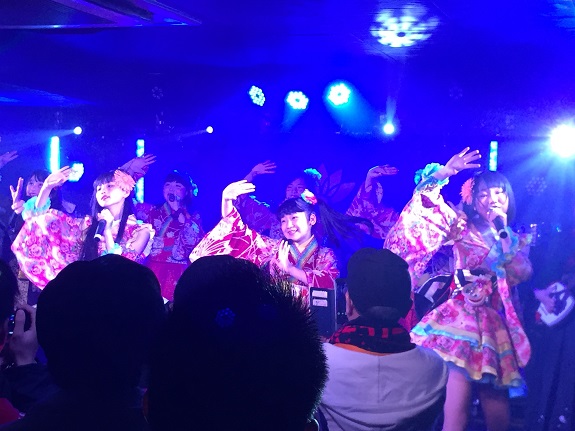 I was really happy to hear them perform Aizu Bandai-san, which was their first single MV back before they were signed to a major label. They also performed Zashikiwarashi, Akita Ondo, and of course Ureshi Namida, some of their older classics. They did do some newer songs, to like their latest single.

As for the VTR, there were no special announcements, it was mainly a retrospective of Kakotan’s time in the group. Since she is an original member, it’s amazing to see how little she was when the group debuted. She’s so tall now by comparison. In fact, all of the original members have grown so much since their early days as idols. They did have a graduation presentation during the live, and again the same guy who did the presentation for Izumi last month did it for Kako too. So I am guessing that he is from King Records. I mean he could be from Nagara Pro, but I have never seen him before at any of Wasamin’s events. BTW, once again of all the members, Ramukyun cried the hardest during the graduation, which is interesting since she is one of the newest members. I guess she is just an emotional girl. 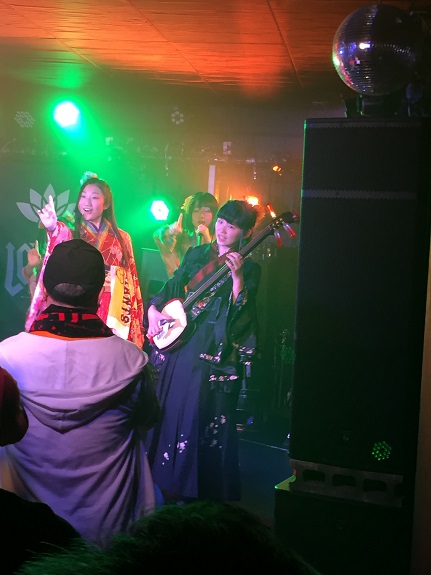 So this is the point where I concluded that this was an awful venue to hold this event. Once the show ended I immediately led David outside to the goods table, which remained in the bar because there was no room to bring it into the stage area like they normally do. We got our stuff quickly, and tried to get back into the main room, but nobody was allowed to go in unless they were in queue for whatever the benefit being offered was at the moment. The other problem was there was absolutely nowhere to stand outside either. It was basically a clusterf**k of people in a tight hallway, and getting in and out of the stage area through the narrow door was almost impossible.

In the meantime I did see Miyabi’s parents, and introduced them to David since Miyabi was the member he seemed to like the best. Just then Yuua’s mom, who speaks pretty good English, came over to say hello. I also showed them the article I wrote for the Japan Times, which features Minyo Girls. So they were pretty happy about that. I showed it to a couple of staff members as well later on. Now my plan was to just take a group shot with all the members, but I could never find the end of the line. Then the next thing I knew that portion of the event was over. I started to get really ticked off at this point, which seems to be a tradition at the Minyo Girls events. They are just so disorganized, it is really annoying…

A short time later we heard that they were starting individual member 2-shots, and Miyabi was among the first girls called. I wasn’t going to allow both David and I to get screwed out of meeting with Miyabi due to the confusion, so we jammed into the main stage area, and found what seemed like the end of Miyabi’s queue. I went first. 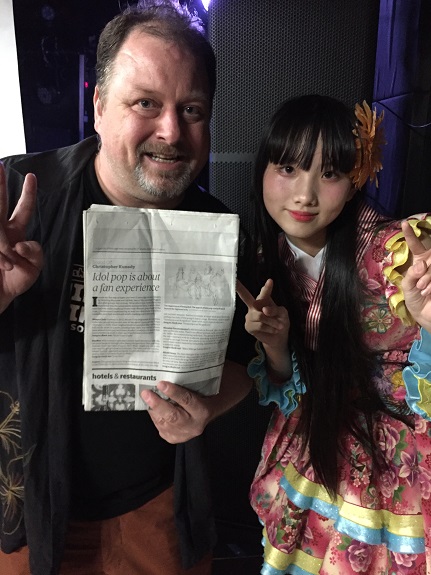 So yeah, I showed her the article, and I got the feeling that she was thinking “English newspaper I cannot read.” LOL. But I also took a moment to introduce David, and point out it was his first Mingaru show and he liked her performance the best. While he was talking to Miyabi, I was trying to decide between meeting Yuua or Ramukyun, who had both entered the 2-shot lanes together. My original plan was to go with whoever came out first, but this made it tougher. But while Yuua had a bit of a line, there was no waiting for Ramu, so the choice was made… 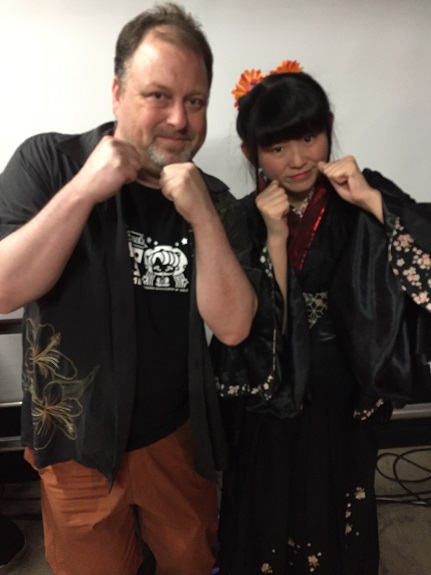 I didn’t bother showing her the newspaper, as I don’t think I would’ve gotten the reaction I was fishing for. But it is always fun to meet with Ramukyun since she is so silly and cute. One of these days though I need to talk with her about AKB since I know she is a big 48-group fan. On the other hamd afterward I felt badly about choosing her over Yuua, so I think I owe Yuua one next time I see them.

From there I couldn’t wait to get out of the venue, so David and I immediately took off for the exit. David had a ticket to go see the Sasshi gradcon, and I was heading to Saitama to see Wasamin, which you can read about in this report. My next planned meeting wi the Mingaru will be May 26th back at Shinjuku Marz, but I won’t rule out going to see them some random mini-live event, if a convenient one pops up. 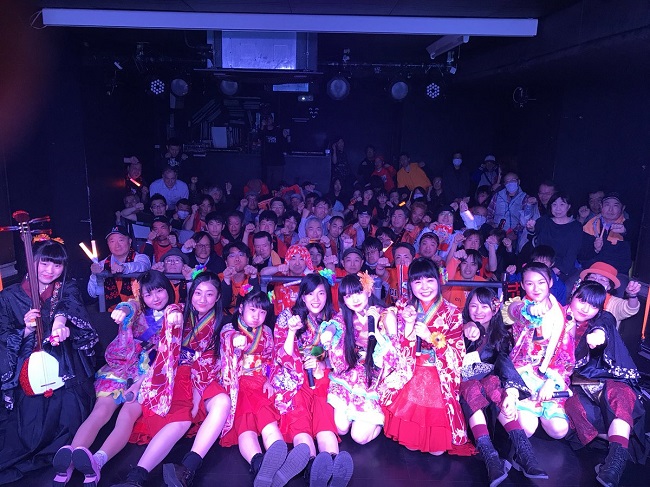 As for Minyo Girls, Kakotan’s graduation now means half the original members have left the group. They are now a 9-nin unit, and unbelievably, cute little Yutori is now the senior member. It will be interesting to see if any other changes occur within the group over the next year. And they are about due for another release pretty soon by my estimation.