After a two-week vacation from seeing any idol groups at all, I was back on the horse Sunday afternoon…

Another day, another crappy cancel machi number at the AKB48 Theater. It has been months since I had either a win, or a cancel machi number low enough where I thought my chances of winning the show were good. That pretty much means that I have to rely on A LOT of no-shows in order to get to see a show these days. So when I received cancel machi #112 via email the other day, I immediately thought “oh great, another non-vitation.” I should also note that GinGin Girls, the indie-idol group I saw with Ebisu Muscats, well they had a one-man live on Sunday afternoon. I was seriously considering blowing off this below-average cancel machi chance and attending that show instead. In fact, I was almost convinced to do just that when that group posted pics from their previous show and….

They performed a recent online live performance topless. Yes, you read that correctly.
———————-

When I got home Saturday night I realized I already missed the reservation discount for that show, and would have to pay a premium price to get in. So when I woke up in the morning, I decided to stick with the cancel machi for better or worse. I can see GinGin Girls another time. I was running a little late, and only made it to the theater three minutes before the cancel machi call. The theater was crowded, and the cancellation number was only at 25, so I figured I had about a zero chance. But the staff kept calling cancel machi numbers through the 40’s, 50’s, 60’s, 70’s, 80’s…this was unbelievable. I could possibly get in. But then…

Four people came up the escalator who had won, but were late. Staff informed them they would have to wait for the second cancel machi call, which pissed off two of them, who kept trying to get into the regular queue, but were repeatedly told they would have to wait. I notice that happens pretty much all the time with people who are late; they always try to argue their way into the seat lottery.

Anyway, the cancel machi cut off at #84. The four late people would get almost half the spots for the second call. At the same time their weren’t very many people left. So maybe I had a chance. When the call passed #100 there were still three spots left. And when #109 checked-in that left one spot. I just needed the next two to be no-shows. Luckily they weren’t there, so I would be getting the very last spot. “#112?” That’s me, Score-a-rooni!

I don’t know why I still block my name out

So this would be my 51st Theater Show win. And since a couple people gave me crap about making my 50th win a bigger deal than my 48th, I will point out that this is my 48th Theater Win at the AKB48 Theater (I have won three times at the SKE48 Theater) Since I was the last to enter, I took my time scouting the back for the best spot. It looked like my usual spot on the far right was full, but there seemed to be a lot more room than usual at the left-side rear (right in front of the door) This ended up being a great spot for a few reasons…

This was the first time I noticed the “fifth guard” watching over the fans. There are two staff in suits watching from the side, then you have the staff standing against the rear of the pillars. However, I had never before noticed the fifth guard standing on a ladder next to the sound booth. Also, there was one fan on the right-side of the theater that kept holding up a sign. I was under the impression that this was against the rules, but he did it throughout the entire show, and I am sure staff saw him doing it, but they never said a word. Weird.

Katsumata Saori did the kage-ana. Oh, I should note that there were a lot of girls in this cast who I have had recent encounters with. In addition to Saori, and of course Ranchan, also in the cast were Sorachan, Hitomin, Sato Shiori, and Kurosu. all of whom I was guaranteed a good reaction. I have also had past encounters with Satomina, Senatan, Okada Rina, and Saito Haruna. So who noticed me during the show???

Hitomin, who started pointing straight at me when she was on the side-stage. Kurosu Haruka, who I am almost positive was waving at me. Sorachan may have been waving at me, but I wasn’t sure. As for Ranchan, I am pretty sure s saw me back there at one point. When ever she was on the left side it seemed like she was craning her head up to see the back, and when the lights came up at the end of the show she immediately began looking my way, and found me soon after. Those are the girls who acknowledged me during the show. Here are a couple other interesting moments of note… 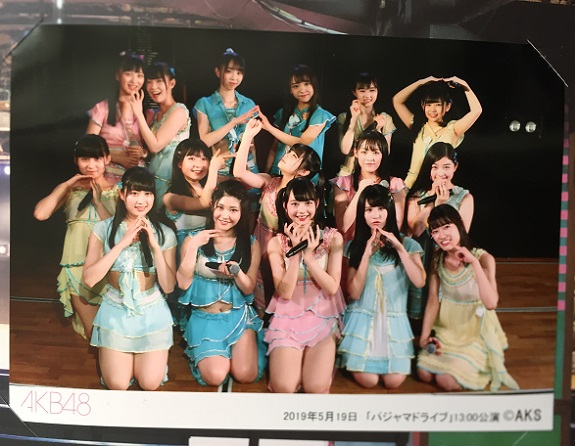 Apparently this is the “We want lunch!” pose

You could hear a lot of Ranchan fans in the audience. In fact, the person next to me also supported Ranchan, and it seemed like we were in a competition of who could call her name the loudest, LOL.

I am sure most are aware that they have resumed using Suifu wa Arashi ni Yume wo Miru as the second encore song. I had gotten so used to them singing Ougon Center that the original song almost felt out of place.

Once again, it really feels like Ranchan is the ‘ace’ of this stage. She is out in front for most of the group songs, she centers the Pajama Drive unit song, and she is in Sasshi’s position for Jiwaru Days, which was performed at the end. 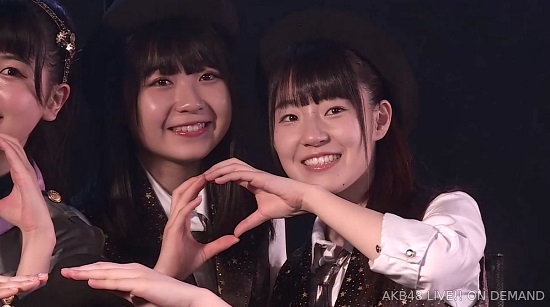 Honda Sora is a standout performer anyway, but she is especially fun to watch in Kagami no Naka no Jean Da Arc. She bounces all over the stage, and just owns the entire performance.

I am still fascinated watching Ishiwata Sena perform. As I have mentioned before, she is a member I really want to like, but don’t really connect with during handshakes or high-touch. That said, I can kinda tell from watching her that she is a bit of an introvert. She isn’t overly loose or expressive, but always seems to be concentrating on what she is doing during the performance. Not like that’s a bad thing, it goes a long way in explaining why forging a connection with her is more difficult. 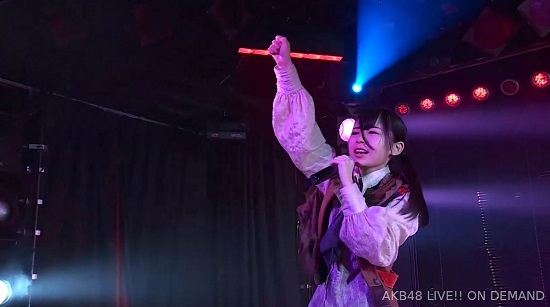 Anyway, I was anticipating the “High Wave” at the end of the show, and who I would get good reactions from. Sato Shiori was on the far right, and I got a nice greeting, and I got a nice smile from Okada Rina The problem was that most of the girls I like, including Ranchan, were all bunched together in the middle, so Ranchan pretty much stole me from the next three members. But it was an A+++ Ranchan reaction. As for the end of the line, I got good reactions from Satomina, and to my surprise, Senatan, who might be warming up to me after all.

Back in the lobby, the queue to get my backpack had some sort of issue, so I lined up for the photopack instead. By then they seemed to have sorted out the bag queue, so I was down the escalator in just a few minutes. At the end of the day, I am glad I made the choice of trying the the AKB show instead of GinGin Girls. I just know that if I had found out I could’ve gotten in, I would’ve been pissed off. And in any case, I can see the DinGin Girls whenever I want.  I don’t have to “win” the show.

Next week is the AKB48 National Event, and it looks like I am going to come into a windfall of tickets due to a couple of my friends deciding not to attend. Unfortunately Ranchan won’t be there, which means I will be using the tickets mainly for Zunchan, Zukki, and if I have time, a few other random lines that catch my fancy.