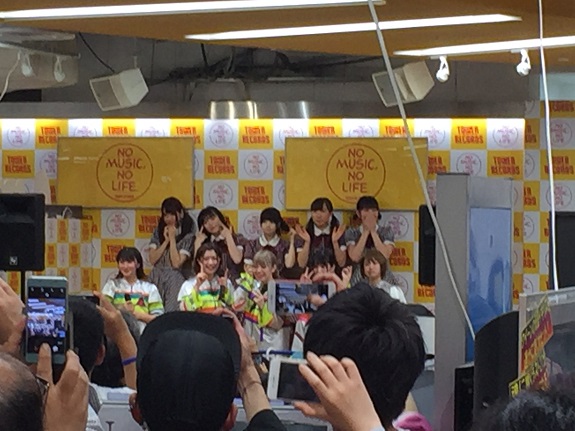 Checking Kiss Bee’s promotional schedule for their new single release, I had marked this particular event as one that I definitely wanted to attend.  Breaking from their usual routine, Kiss Bee will not be culminating their release week with events at Venus Fort in Odaiba.  Instead they will take the next few days off, and finish the promotion with two events in Miyagi Prefecture.  Huh?  The group has made trips outside of Tokyo on many occasions, even during their release week.  But it just seemed like an odd move to me.  But no matter, I had this event.  And technically I am going to be pretty busy this coming weekend anyway.

My plan was to run errands in the afternoon, and then head over to Shinjuku for the evening.  However, those plans were pretty much dashed with the big storm that blew through Tokyo from Monday evening until mid_Tuesday afternoon.  I decided to huddle indoors for the day (with the exception of a quick trip to the market, where I got completely drenched despite having an umbrella) and then go to Shinjuku in the early evening after the storm blew over.  Anyway, I arrived a little early, and decided to grab a quick dinner at Soup Stock Tokyo. 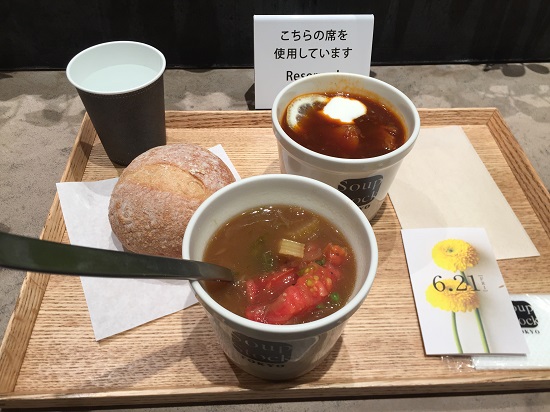 Onion soup in front, borscht in the back.

It was my first time trying their Tokyo Borscht.  I really liked it.  Unfortunately their Onion/Celery soup was a bit of a letdown.  But it was while I was eating that I began wondering to myself what kind of clusterf**k this event was going to be.  Kiss Bee is beginning to become really popular, and their events have had a lot more people in attendance than when I first started liking them.  I couldn’t imagine how they were going to fit so many people in the relatively small event space at Tower Records.  Sure enough, I headed upstairs around 20 minutes prior to the event, and the store was a madhouse.  You couldn’t even get into the event space, and the line to buy CDs stretched the length of the shop, and then turned a corner.  I couldn’t decide whether to hunt for the best spot I could find, or just brave the long line for CDs, except I couldn’t even find the rack where the CDs were.  I had to circle the store three times before finally finding it.  I ultimately decided that I could see the live just as well from the queue as anywhere, so I grabbed one CD and queued up.

I settled for one CD since 1) I already have the entire set on order, and 2) the could tell the lines for buppan would be insane.  Not to mention each version has the same tracklist, only the covers are different.  While I was in the queue Kiss Bee came out and did their rehearsal, and Kiss Bee Youth performed.  So I kinda lucked out, as I had completed my purchase just as Kiss Bee took the stage for their actual set.  I found a spot in the far back part of the store which had a clear, albeit far away vantage point.  It is the furthest back I have ever been for an in-store mini-live.

Now I could talk about the event itself, except that I ultimately didn’t pay much attention to the show at all.  I instead ended up talking with another fan for the entire show.  He thought that I was possibly seeing Kiss Bee for the first time, until I pulled out my Tanifuji oshi-towel and showed him some of my past 2-shots.  We ended up chatting and exchanging social media contacts until it was time for the photoshoot and janken for autographed posters, which I of course lost in the first round.  I couldn’t figure out how they were going to pull off the free high-touch.  They ultimately formed a huge queue up the stairwell.  The line was so long that after I greeted the members I left the building and went for a walk, coming back 15 minutes later for buppan.

I had one ticket, and they were offering the opportunity to get our CDs signed.  However, that wouldn’t be until the end of the event, and if the previous events in this promotion were any indication, wouldn’t take place for at least another hour.  I decided that I didn’t want to wait that long, and settled on a 2-shot shamekai. 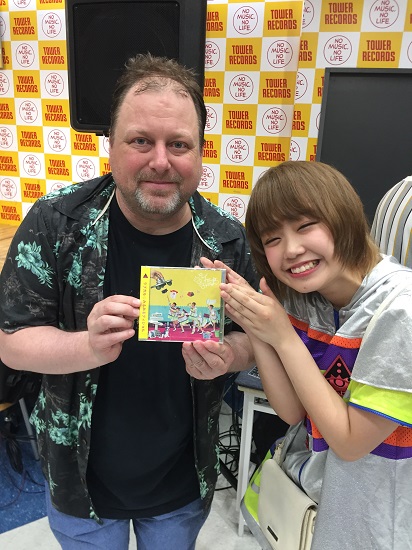 Yeah, I really need a haircut

They were rushing us through, so I didn’t have much time to talk to Misaki-chan, but she commented on the fact that I only had one ticket.  How did she know?  Because we posed with only one copy?  I told her that the group was becoming so popular, and that I couldn’t stay late.  In any case, I got a CD, and I got to say hello to Misaki.  That was all I really wanted anyway.  There was also the issue of picking up the CDs I had on pre-order at this same store, but I couldn’t figure out how to sign into my account, and it was so busy that I didn’t want to bother anyone about it.  So I hopped on the elevator to escape the craziness, grabbed a soda downstairs, and headed home.

Personally, I think Kiss Bee has outgrown being able to hold in-store events like this.  There were just too many people, and they monopolized the entire floor.  That said, Japan seems to have a different theory about stuffing people into small spaces, so maybe they will continue having events like this.  Oh, and when I got home I figured out how to sign into my Tower Records account, so I will head back over there sometime this week and pick up the rest of my CDs.

Coming up this weekend Wasamin has a Saturday photoshoot event I am debating whether I want to attend.  Minyo Girls have a similar event at the same venue that day, but it is 3000 yen per group.  So if I do decide to go it will be for Wasamin only.  Then on Sunday I have tickets for AKB48’s Zenkoku event at Makuhari, but I also have a ticket for Minyo Girls’ one-man live.  So the plan is to see the Mingaru, then skip buppan and head the AKB event.  I will miss the mini-live, but will have plenty of time for the handshake lanes.  Unfortunately for me the AKB48 3rd Gen draftees (Ranchan Sorachan, Hitomin, etc.) won’t be there, so I will be using most of my tickets on Zunchan and Zukki, not like that’s a bad thing, right?