If you were wondering why I haven’t been talking much about Wasamin lately, it’s because she has spent the better part of May in Osaka and Nagoya performing the same play I reported on back in March. This week she returned to Tokyo, and this event was the first chance in quite a while for many of her Tokyo-based fans to speak with her.

Actually, this was sort of a “shared” event, which is something that Nagara Pro has been doing with their artists lately. When Wasamin did her annual solo concert at Tokyo Kinema Club earlier this year, Hayabusa also performed a concert at the same venue earlier in the day. In fact, at various times Wasamin has also shared events/venues with Minyo Girls, and BillyKen, not to mention the various stuff she does with Mizumori Kaori. On this day there were four events; Minyo Girls were first, then Wasamin, then BillyKen, and finally Hayabusa. Each event required a separate admission, so since I have a ticket to see Minyo Girls on Sunday, I decided that I would skip their event and just go to Wasamin…

In fact, I considered skipping Wasamin’s event as well. I really wanted to see her, but I had a fairly busy weekend planned, and to be honest I was quite tired from being out late on Friday night. Moreover, I really wasn’t in the mood to navigate the online ticket ordering system either. But when Wasamin’s staff blogged that we could purchase a ticket directly at the venue, I decided to brave the heat, and my fatigue, and go to the show.

MFJ Hall (Japan-Budo Kaikan) is a small venue directly behind the Yebisu Beer Museum at Ebisu Garden Place. The event description was similar to many of Wasamin’s fan club events, although this event was technically open to anyone. There would be a short interview, games, singing, and then a 2-shot photo session. Fans could also purchase additional 2-shot cheki or shamekai tickets if they wished. When I arrived the fans were camped outside under the trees, waiting for the doors to open. Thankfully, Wasamin’s staff invited the fans to wait in the air-conditioned foyer so we could get out of the heat. There were two of us there purchasing the on-the-day tickets, and we were instructed that people who pre-bought had a numbered seat, and the seats in the back row were reserved for us. That’s fine. It’s a small venue anyway. When doors opened the queue for goods (and additional 2-shot tickets) was immediately jammed, so I instead went directly to my seat and took a look at the questionnaire I was handed. I decided that I would try to fill it out for a change, although I didn’t understand all the questions, I knew what the majority of them were asking. Eventually the queue for goods died down, so I decided to check out what they had for purchase. It turned out they had two new items… 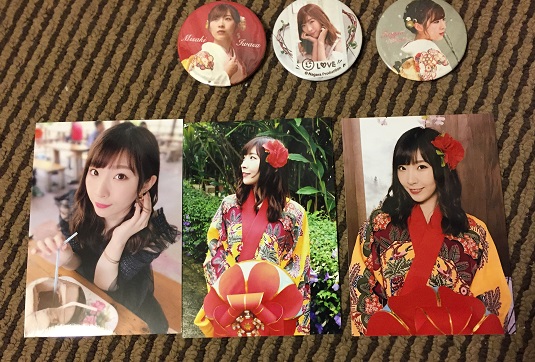 A three-photo set of pics from Wasamin’s recent trip to Okinawa, and a 3-piece badge set. I decided to pick up both of them, but would wait on possibly picking up more 2-shot tickets. A few minutes later, after a slight glitch with the microphones, the event started. 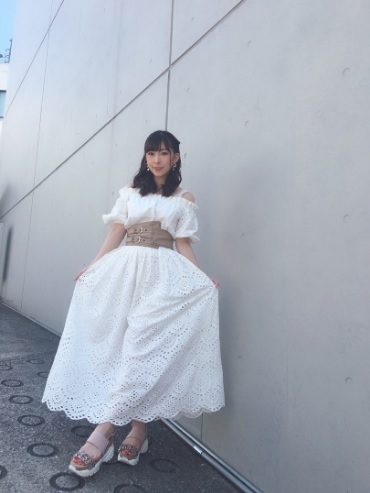 Oh my, Wasamin looked absolutely ravishing in what she described as her “tenshi” outfit. Ichikawa-san (Wasa-manager) conducted the interview, which was mainly about her experience of being on the road for three weeks. It was her first time being away from home for such a long stretch (although I do recall her mentioning on her Twitter coming home for a day or two between the Osaka and Nagoya dates) She said that spending all that time with her Nagara-pro mates was a lot of fun, and made the long trip easy to endure. She also talked about her upcoming concert DVD release. The DVD is coming out this week, although she isn’t doing any promotional events for it until mid-June. In fact, the only scheduled Kanto event right now is in Chiba, but there will be a DVD poster giveaway at the event. So I will be sure to attend.

Wasamin finished the show portion of the event with two songs, Genki wo Dashite (Takeuchi Mariya) which she first performed at her solo concert in January, and Koi no Owari Sangenjaya. We would be lining up for 2-shots by our seating order, which meant Kimura-san and I would be going last. After that they instructed anyone with additional tickets to form a queue in the foyer. The initial 2-shot also included around 20-30 seconds of talk, and there were around 65 people at the event, so it was over 45 minutes before my turn. I told Ichikawa-san, who was taking the photos. that I wanted a photo that showed off Wasamin’s entire outfit. We posed for the pic, and just as she took it…

Earthquake!!! (I checked, it was 5.1 and based in Chiba) Ichikawa-san kinda stumbled forward. Wasamin started exclaiming “did you feel that???” Now to be honest, I wasn’t sure if I did feel it. But I assured her that being from California, I am quite used to earthquakes. I went on to gush about how gorgeous she looked, and everything she was wearing, from her dress, to her shoes, to her hair, and her jewelry, were beautiful. She responded “I am tenshi,” and I countered that she looked like a princess. I went on to tell her about my recent article in the Japan Times about rail commuting in Japan, which she said she wanted to see. And then told her about some of my recent job interviews. Wasamin was commenting on how busy I was, and told me to keep working hard. I definitely extended my time a bit, but eventually I thanked her and let Kimura-san take his turn.

After confirming there wouldn’t be any sort of costume change, I decided that I wouldn’t purchase any additional 2-shots. After all, I was really tired. So I walked back over to Ebisu Garden Place, bought a cold drink (Green Shower Mineral Water, which is really good, and somewhat hard to find) and grabbed the train back home, picking up dinner to-go along the way.

Tomorrow I have a really busy day planned, attending Minyo Girls’ one-man live in Shinjuku, and then heading to Makuhari for the AKB48 Zenkoku event. I will be missing the mini-live, but will be there in time to visit the handshake lanes. As for Wasamin, right now I plan on going to her DVD release event in mid-June. I also won the grand prize “Sangenjaya Party” from her single release, which is at the end of June. Aside from her boat party in late-July, I hope she plans a few more events in the coming months. She has become so busy lately that she hasn’t been doing quite as many promotional events as before, but I guess that’s a good thing.