Despite not being a huge fan of going to Shibuya, I do enjoy when groups perform at this particular venue. In fact, it has become a go-to venue for many groups. I have seen Wasamin, Festive, Kiss Bee, Chaki, and Minyo Girls here many times before.

I was going through the June schedules of all the groups I like, trying to map out a schedule for the next month. This was the one Mingaru event I knew I would be able to make. However, both Miyabi and Ramukyun wouldn’t be performing, although Yuua would be there. The 29th was also the opening night of the Keyaki Beerfest in Saitama. So it was decision time; beer or idols? I decided that since rain was in the forecast, and the beerfest was outside, I would head to Shibuya. After all, I don’t yet have a ticket for the Mingaru One-Man Live in June. Perhaps I could pick up a ticket at this event, even though this was specifically a promotional event for their upcoming 3rd major single, Happy Days!!! 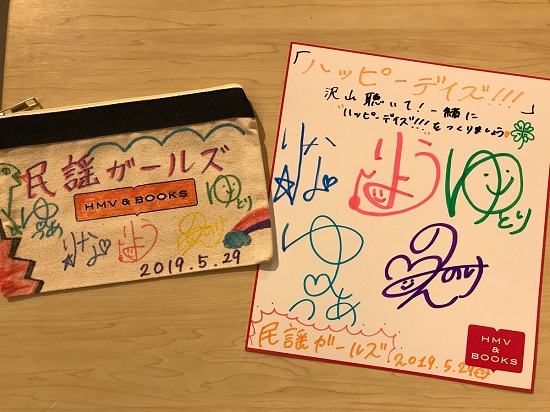 I arrived in Shibuya a little early, and grabbed a cocktail and snack. When I got to the Modi building there was tons of promotional material all over the place for the K-Pop group Seventeen. Apparently there was some sort of pop-up shop and museum in the building commemorating their new release, and there were cute K-pop boy bancd fans literally everywhere. Opening up CDs, collecting and trading photos, they were literally on every floor from the 4th all the way to the 7th. When I arrived at the 6th floor there was nobody near the stage area except for Seventeen fans. Huh? I checked Twitter again; This was the place, and this was the time. I decided to go up to the 7th floor to see if they had moved the event. Sure enough they had. (I had missed that tweet, which went out 30-minutes before the event) In any case, there weren’t more than 20 fans there, so I took a spot on the far right side very close to the stage.

The girls came out for a rehearsal performance, Yutori, Yuua, Ryo, Rina, and Minori. The two members I like the best of these five, Yutori and Yuua, were on the far left side. I had Minori and Rinacchi in front of me. I was debating moving to the other side, but I would be giving up a primo spot for a spot a bit further back, so I decided to stay where I was. Perhaps it would be fun to root for Minori and Rinacchi for a change.

They did a fairly long set, performing six songs, including Kirari Yume Ondo, Handkerchief Drop, Sentimental Journey, and Gunjou Homerun. Something went wrong with one of the microphones, so for most of the show Ryo and Minori switched off using a mic, the other one just dancing. They pretty much stayed in their stage positions for the entire event, so I had quite a few interactions with Rinacchi, and got a good closeup view of the way Minori expresses herself onstage. She is really interesting to watch.

The show ended, and I immediately went to the back where they were selling CDs and giving out handshake tickets. It turned out they weren’t selling one-man live tickets at all, only CDs. Oh well, I pre-ordered two copies, which would afford me one group-shot… 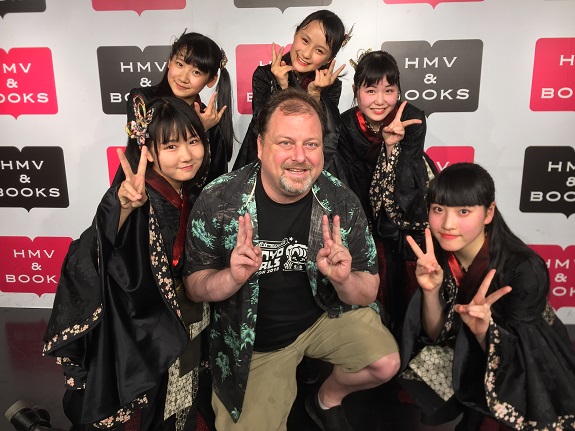 After taking the photo, I turned around to shake everyone’s hand, then stopping in front of Yutori since I wanted to deliver a personal message to her. I told her that I loved her performance of Abba’s Waterloo at Shinjuku Marz the other day, and that her English was really good. Yutori smiled and thanked me while the rest of the girls laughed. With my two tickets spent, I talked for a couple minutes with the Wasafans who were at the event, and took my leave….

When I got out outside, it was pouring rain. Good thing I had an umbrella, and good thing I didn’t go to Saitama. Although when I got back up north a little later (to Akabane, and then home) it was completely dry, like it had not rained there at all. So apparently this storm just skirted through Central and Southern Tokyo, and missed the north.

I really want to pick up a ticket for their June one-man live. I could do that online, but I would be missing out on bonus handshake tickets if I did it that way. I will need to scour their schedule to figure out which event they will be hand-selling tickets at.