I had been looking forward to this event ever since Rion announced this DVD release earlier this year. Prior to being a J-pop idol with Ebisu Muscats, and later Tokyo CLEARS, Rion was a teen gravure idol, and had put out quite a few solo DVD releases. This would be her first gravure release in five years, and in that time she has changed quite a bit, not only in looks, but in maturity…

In fact, at first I was really curious about what direction she would be taking this return to the gravure scene. Her older stuff never got past being suggestive, and she has never publicly posed nude (afaik) but checking the other titles on the Gravision website, while not pornographic, many of the titles walked a very fine line. So how risque would Riochi’s DVD be? I mean on the heels of doing a concert with a bunch of AV idols? Well, we got our first clue while she was filming, which she documented in detail on her twitter and ameblo blog. Most of the preview photos were of Rion in bathing suits and cute summery outfits. When the production company website released the preview video, it pretty much confirmed that’s what it would be, If was just a couple weeks until the May 2nd release date, except…

The release event wasn’t scheduled until June 2nd. Huh? That’s a month later! Moreover, the only way to attend the release event is by reserving your DVD/Blu-Ray copies on Yahoo PassMarket. I checked the website, and it said I needed to create an ID to use it. I had an ID, but I forgot it. So I pretty much procrastinated trying to reserve a spot until the evening before the event, after Rion lamented on Twitter that she wasn’t sure if many people would even be coming. Oh, and PassMarket ended up being a bigger pain in the ass than I even expected. They wouldn’t accept any of my Visa or Master Cards, and while they said they accepted American Express, the dialog box wouldn’t take an Amex card number. That left my only other option, to pay at a conbini. Being that I had spent the evening drinking many brews at Keyaki Beerfest, and didn’t feel like trying to navigate the Japanese ticket system, I simply went to my local Lawson where I know all the staff and said “Guys, can you just do this for me?” Which they did. 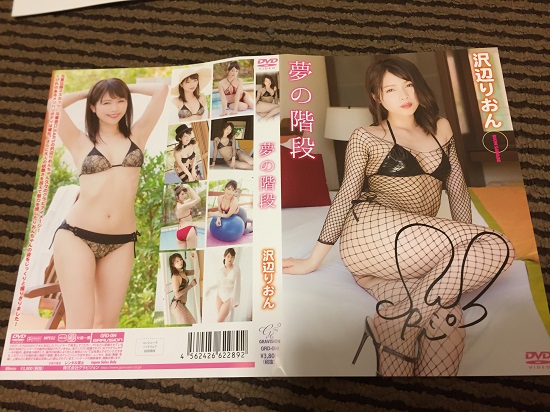 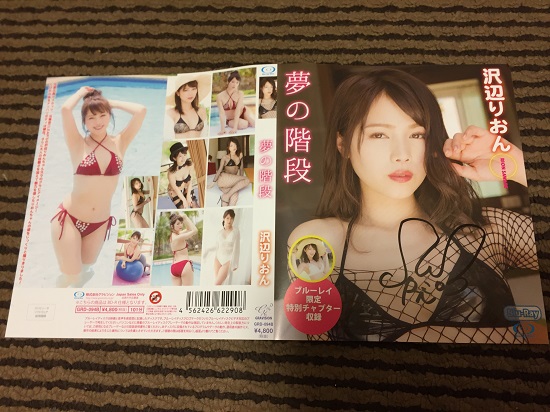 Signed covers. I slipped them into the actual DVD covers

Spending the morning recouping from the previous evening, I headed to Akihabara in the early afternoon. Luckily, I had thoroughly checked the website, where I found out that the event wasn’t at the Sofmap across from the Donki, but the one a couple blocks down closer to PARMS. I arrived 45 minutes early and picked up my videos and tickets. I had purchased one of each type, DVD and Blu-Ray, which would afford me two photoshoots, two 2-shot chekis, two bonus photos, and two autographed covers, in addition to watching the interview at the beginning. They had additional bonuses for purchasing 3, 4, and 5 copies, which included additional photoshoots, 2-shots, and bonus pics, but I was fine with what I had. I had ticket #27 for entry, which landed me in the third row on the left end. Not bad. I counted around 35 people in attendance. 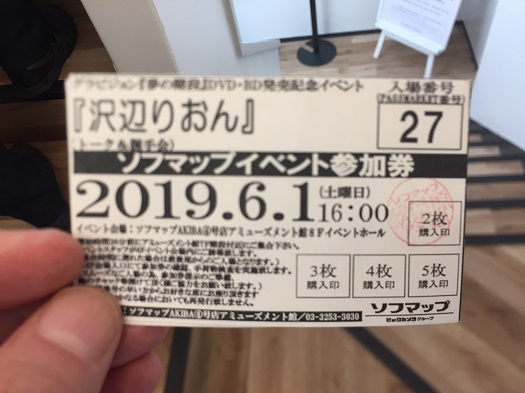 Riochi came out in a summery one-piece outfit, which looked so beachy and comfortable. She spotted me almost immediately and gave me a little wave. I don’t know the comedian who interviewed her, but he pretty much ran the entire event. She thanked everyone for coming, and immediately asked how many people had watched the video already, and only two people raised their hands. “LOL, Chotto matte!!” Riochi exclaimed. The funny thing is that I think we could’ve come prior to the release date to pick up our DVDs, but most everyone waited until the event. She mainly talked about what it was like spending three weeks in Thailand (where the video was filmed) and shared a few anecdotes about the film shoot. She also talked about how she was asked to do a narration of the scenes. (I watched the video later, and yes, each scene has a narrated button at the end, mostly philosophical stuff about her life)

From there it was time for buppan. Now to be honest I was slightly worried about this part. This was not the first gravure event I had attended, and sometimes the buppan can get quite confusing, especially when there are a bunch of various prizes you can get depending on how many purchases you made, and what type. (There were certain Blu-Ray bonuses too.) However, the way they conducted the event was very orderly, basically the more copies you bought the longer you stayed. So we started with the first photoshoot in groups of four. Rion would spend 15 seconds posing for each of us, but we could continue shooting for the full minute. 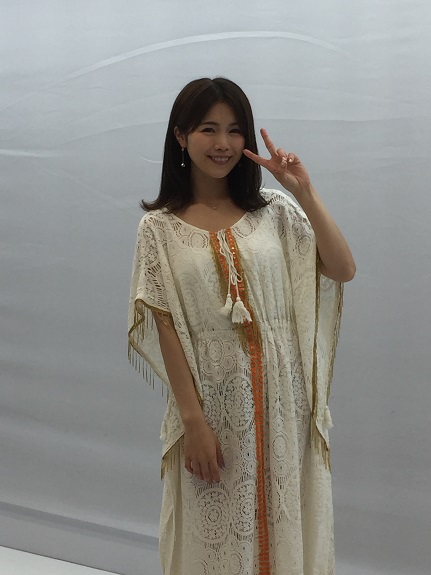 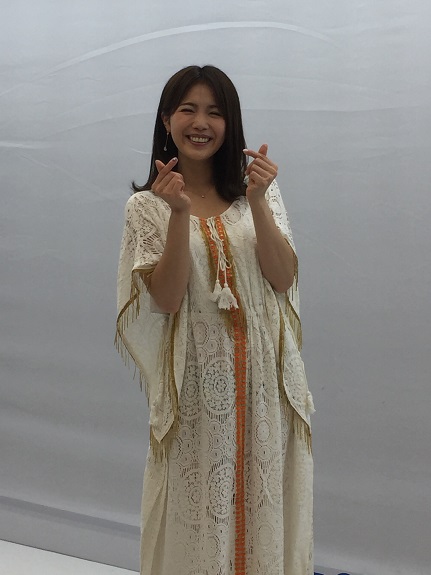 My best photos are the ones in which she is looking directly at me. From there it was time for the first 2-shot, which was exclusive for people who had purchased a Blu-Ray. It turned out almost everyone in the room had. I told Rion that I loved her outfit, and she made me want to go to the beach. She responded that she was really happy that I came to the event. After the 2-shot we were handed our gifts, the random photos and video covers. Since I had both a DVD and Blu-Ray I got one of each type. 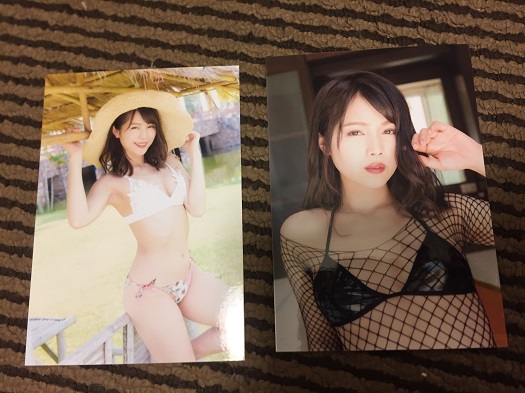 After everyone took their 2-shot, Riochi went backstage to change into a swimsuit. Well, actually I am pretty sure she was wearing the first swimsuit under her first outfit, as she came back out in a relatively short time. It was time for the second photoshoot, which was in the exact same format as the first. 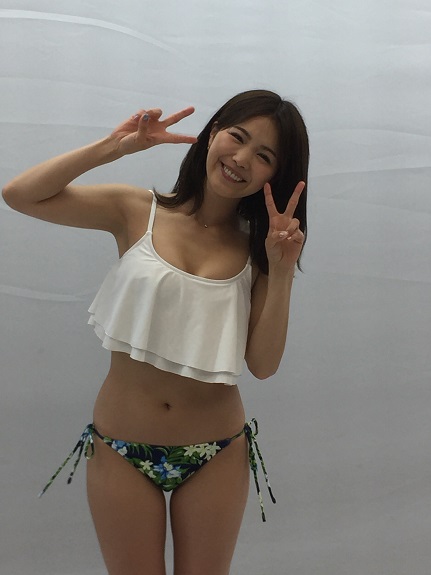 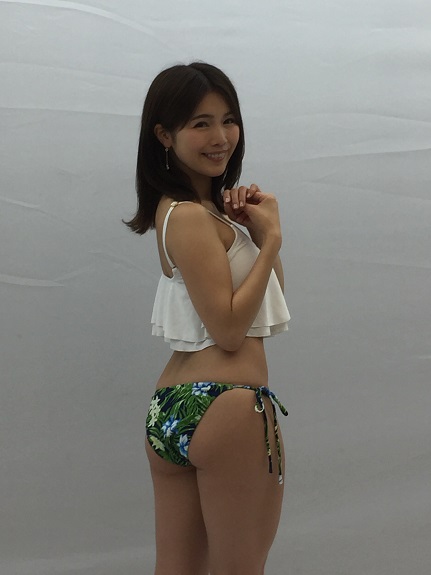 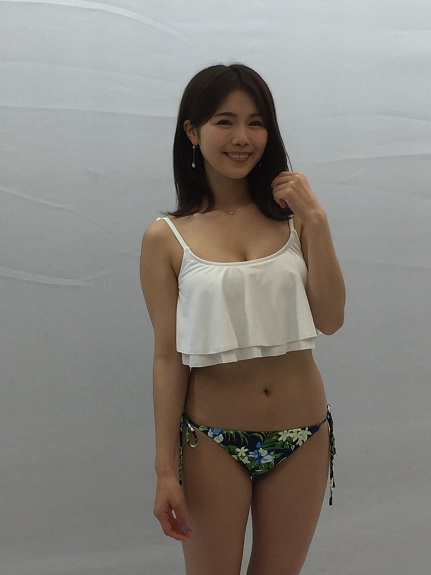 Ahh, Riochi is so petite and cute. Oh, and you can tell she spends time in the sun. Later she admitted that she had been dieting and preparing her body for this specific event. If you look at her earlier work, she was known as a busty idol, and was a bit more curvy. It’s interesting now that she is getting close to 30 that she is so much smaller, and actually looks younger now than she did 5-10 years ago. At least I think she does. After that photoshoot we again got to take 2-shot chekis.

I told Riochi that my college graduation was the next day, and she congratulated me. I had exhausted all of my benefits, so I didn’t know if I could stay or if I had to leave. There was one person there who only bought one copy, and he had left. I waited a few minutes, and eventually everyone who had purchased two copies began to get up and leave, so I followed suit, but a few of us hung on toward the back to see what the next outfit was that she would be wearing. These are the last two that I didn’t have benefits for… 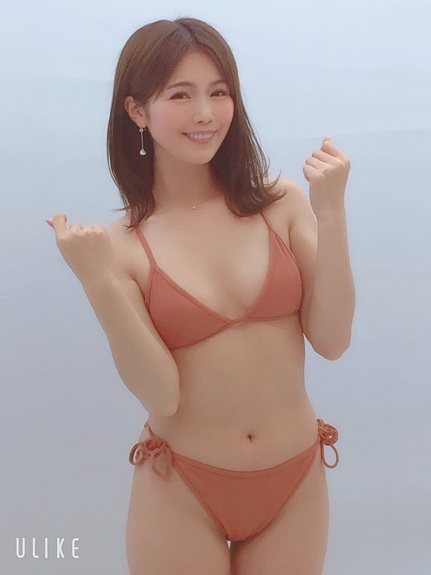 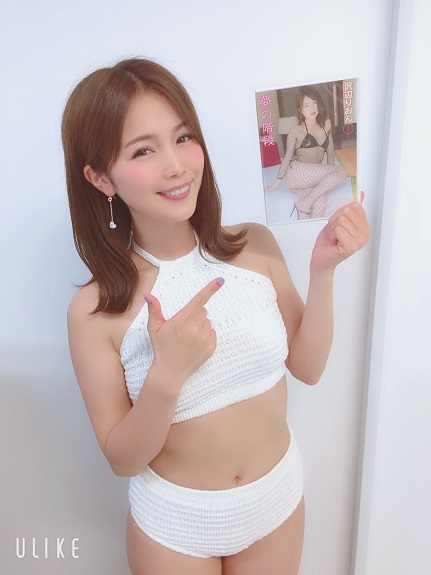 After that I headed out to do a little shopping, and to head home. Rion had two other events on the weekend; first a dinner party on Saturday night, and then a Fan appreciation event on Sunday. Both cost around 10000 yen to attend, and I had already spent 9500 yen for the release event, so that was enough for me. As for what the future holds for Rion and fan appearances, I’m not sure. However, since she graduated from her idol group six months ago I have already seen her twice, so she seems to be keeping active in engaging with her fans, so that’s great.

Oh, and I watched the entire DVD that evening. As a fan of Rion, of course I love it. It is pretty much her wearing outfits of varying sexiness and posing, or rolling around on a couch, or a bed. There is one scene where she is doing yoga, but her yoga outfit is so tight that it ended up being one of the more suggestive scenes. Oh, and the Blu-Ray has 12 additional minutes of footage, but I don’t have a Blu-Ray player at the moment, so I will have to wait to see the additional material. But yeah, pretty much straightforward stuff. But if you like Rion, then it is fully worth the purchase.