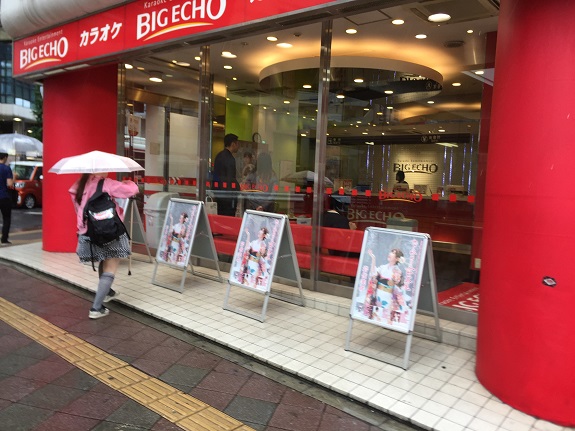 Another day, another duet with Wasamin….

When Wasamin’s manager first announced this event a few weeks ago, I was somewhat hesitant to apply. Not that I didn’t want to go, but I had already received notification that I had won the grand prize from her 8th single release, which is a party at this same location. Given only 28 people would win this particular event, I didn’t want to be greedy. On the other hand, I don’t think Wasamin would be happy if she knew I purposely didn’t apply. Ultimately I put in my application, and a few days later I received e-mail notification that I had won.  Score-a-rooni!

So this was going to be a total Wasa-weekend. Not only would I be attending this event, but she is doing her promotional mini-live event in support of her 5th concert DVD/Blu-ray release on Sunday in Chiba. I headed out early, hoping to have lunch at a restaurant I wanted to try a few blocks from the station. It was pouring rain when I arrived in Sangen-jaya, but I trudged through the rain, only to find out the restaurant wasn’t open. Huh? Their website listed lunch and dinner hours, unless perhaps they only serve lunch during the week? I had 45 minutes to find lunch before I had to check-in to the event, but it seemed like every other restaurant I was interested in had a long line. As I was running out of time, I scratched my lunch plans. Hopefully the snacks they were serving at the Wasamin event would be good. 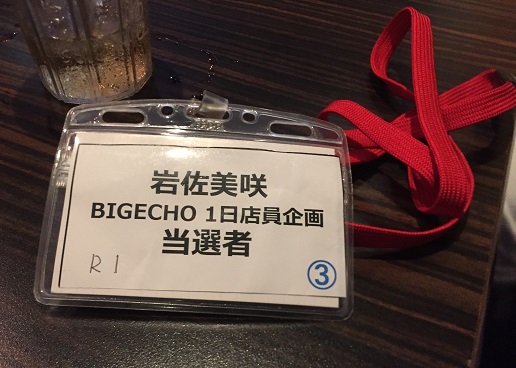 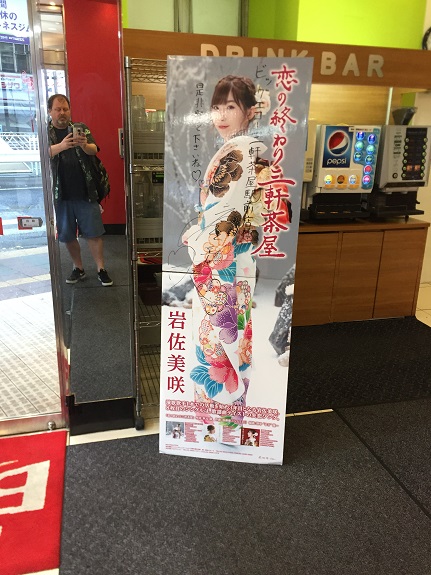 I arrived at the venue, and checked in 30 minutes before the event. By the way, if you watch the MV for Wasamin’s latest single, there is a scene where the actors are walking right by the entrance to this BIG ECHO. I was given a badge to wear, which listed the room I would be in. It turned out there were three separate rooms, two of which were considerably smaller than the main room. I was informed that it was all-you-can-drink soft drinks from the drink bar, and we had to order one drink that would be served to us in the karaoke room. I ordered a Pepsi, then filled my cup with Ginger-Ale before heading downstairs to my assigned room. 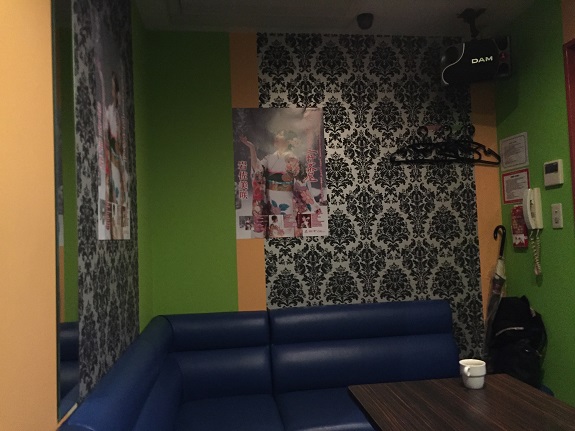 It turned out I was in one of the small rooms with four other people. I’m not sure how many were in the other rooms, but I was told we were the smallest group. Sasou-san, one of Wasamin’s assistants, came in and explained how the day would play out. He mentioned that not only would Wasamin sing a song we request, but that we would all have a chance to sing a duet with her. In the meantime, he invited us to have fun with the karaoke machine, as there would be a lot of down time between the moments when Wasamin would actually visit our room. The five of us discussed which songs we might request. I had suggested Misaki Meguri, which is on my list of favorite Wasamin performances on the previous post. Everyone thought it was a good idea. In the meantime we were playing her music videos and practicing the karaoke, just in case we would need to sing one of them. We could also hear Wasamin singing Mujineki in one of the other rooms. It was around 30-minutes into the event when Sasou-san informed us that ‘our waitress’ was on her way…

In walked Misaki, our server, with our snacks. We were served three baskets of Pocky, popcorn, and nori-flavored potato chips. Frankly, I really don’t like nori-flavored chips, but keep in mind that I missed out on lunch and was famished. In the meantime Wasamin was playing this shtick where this was her regular job, and she wasn’t an enka singer. It was all really silly, but eventually she offered to sing us a song, and asked if we had any requests. Immediately the other people in the room blurted out Misaki Meguri. Wasamin exclaimed “Natsukashii!”and asked who came up with that idea. We told her that we decided together. She was trying to remember which key she sings the song in, and eventually decided to wing-it, although she had the song in much too low a key, she kept fooling around with it throughout the first verse until she found a key she was semi-comfortable with. She had forgotten some of the lyrics as well, which isn’t too surprising since it had been two years since she performed it in concert. After singing she informed us she had presents for us, and would be back a little bit later. Oh, and at one point Wasamin started eating our popcorn, LOL. She did the same thing during her boat tour event a couple years ago, stealing tempura from her fans. 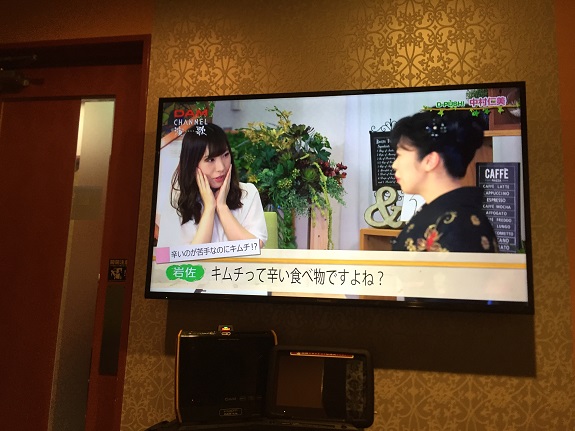 It was around 40 minutes of karaoke, and watching a couple episodes of Wasamin’s interview show on DAM Channel before she would return to our room with drinks. BTW, in addition to her show, Wasamin also does all the voice-overs for the DAM Channel Enka promotions. I wasn’t aware she is a prominent voice for them. Anyway, Wasamin had our drinks, as well as a promotional coaster with her photo on it. At first she started to put the drinks down on the first coaster, but Sasou-san stopped her. “I think they want to keep these a souvenirs.” he suggested, so she put the drinks down directly on the table, and handed us the coasters. She asked if we were enjoying the snacks, and noticed the bowl near me was empty. “I was hungry!” They rearranged the tables and had us all sit on one side. It was time to sing duets…. 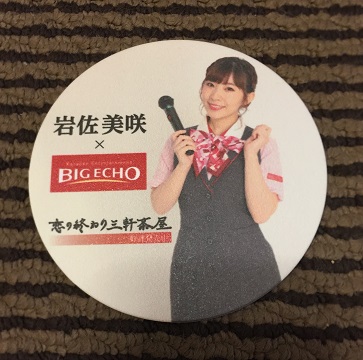 Actually, it was one big duet. We would all be taking a turn singing a verse of her 8th single, Koi no Owari Sangenjaya. Sasou-san would also be taking a 2-shot cheki of us while we were singing. It worked out perfectly too, since there were five of us, and the song is verse, chorus, verse, chorus, chorus. I was chosen to go last, which also meant I got to stand up there for the instrumental portion of the song, and then the final chorus. In fact, I decided to mimic the move Wasamin makes where she shows off her kimono during the instrumental, turning my back and raising my arms. It got a good laugh and Wasamin shouted “Copy!!!” 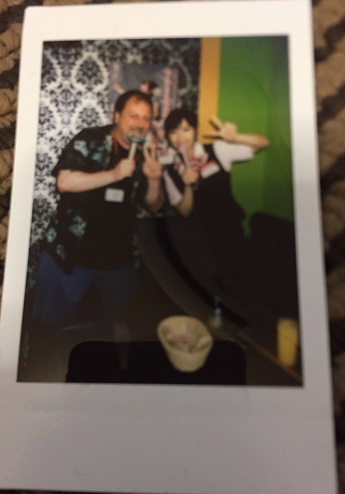 At the end of the day, I was really glad that we took the time to practice, since it seemed like most all of us did a really good job singing the song. One lady who was in our group started crying after getting to sing with her too. But yeah, it was another opportunity to sing together with Wasamin, which is something I used to dream about doing, and now I have done it twice! 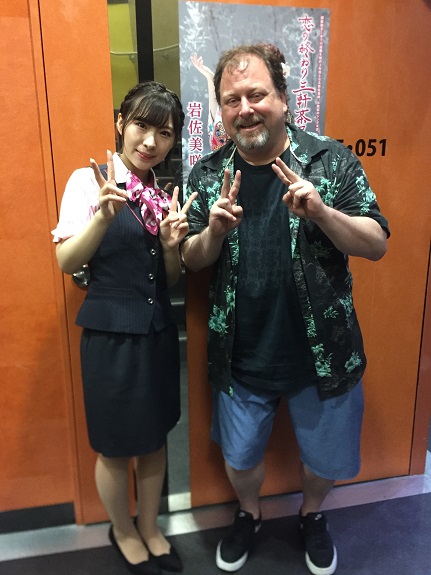 After that we were told we had around fifteen minutes, and then Wasamin would see us one last time as before we left. We each took a 2-shot shamekai, after which she presented us with an exclusive autographed clear file, and a coupon in case we wanted to rent out the special Wasamin room which will be available through August. I told Wasamin that I had a lot of fun, and I looked forward to seeing her the next day. “You are coming to Chiba?” I informed her that I hadn’t yet purchased any copies of the concert. She said that was fine, and that I could purchase them tomorrow. Yep, that’s my plan.

Overall this was a great event. I mean I could be pessimistic and say there was a lot of time where we were just sitting in the room. But the time we got to spend with Wasamin was extra-special, and made the entire experience worthwhile. She served us, we got to sing with her, we received exclusive gifts. I mean what more can you ask for? The good news is that I have an invitation to another event she will be holding at this exact same location in two weeks. I am sure it will be just as fun! And perhaps we will get to see the Wasamin special karaoke room at that time. I really want to check it out!