I have to admit the first time I attended an event at Yotsuya Lotus I was not impressed with the club’s setup. It’s a small venue in the basement of a small office building in Yotsuya Sanchome, which leaves me with a choice of either taking a bunch of different trains, or going more directly to Akebonobashi, and then walking for 10-15 minutes. So part of me was keen to skip Mingaru’s June one-man live. However, part of me really wanted to see this show. For one, this was a “fan’s choice” event, where we were asked to submit our top 8 favorite Minyo Girls songs, and they would choose one lucky fan’s setlist for the show. I did put in a submission. However I forgot which songs I requested. To be honest, I don’t know a lot of their songs by name. I went through all their releases track by track before deciding on my eight favorites. Needless to say, my setlist was not the one selected, although there were at least a couple songs on the winning setlist that were also on mine.

But back to Yotsuya Lotus. On a recent blog post, after attending an underground Idol Live at Akiba Colors, I wondered about the smallest venues I had ever been in. Akiba Colors is definitely the smallest. However this venue comes close. But even more than the size, the setup makes it very difficult to move around. The bar is located in a small room off to the side, where Minyo Girls also had two different goods tables set up, one for CDs and the other for merchandise. So you have three queues extending out into the box office area making it difficult to even get in the door of the place. Then the entrance to the actual stage area is through a narrow door in an even more narrow hallway. And don’t get me started on buppan, since the stage area is small they make everyone wait in the outside hallway, making it close to impossible to move around. So yeah, not my favorite place to see an idol show by a longshot.

The stairwell down to the venue

Still, I wanted to see the performance, so I headed out in the mid-morning to Yotsuya. Luckily it wasn’t raining yet, although forecasts called for rain pretty much all day. I made it to the venue around five minutes before doors and took my place in the queue. After entering I found a spot sort of in the middle of the floor, which I claimed with my backpack, and went back to queue for the goods table. Last week I completed filling out my point card, which entitled me to some special prize. I had no idea what the prize was, aside from me having to talk to staff about it. (There is no explanation on their official site, and the print on the point card is microscopic) I figured it was like a free 2-shot or something. But they explained to me it was a lot more involved than that. From the way she described it, I was to receive a personalized letter (or something) from my member of choice. She asked who I wanted it to be from, and I requested Miyabi. Now when I get this benefit? I have no idea. So I guess I’ll just wait, although I have no clue when I will be seeing them perform again. Anyway, I wasn’t in the mood to purchase anything, and it was almost time for the show to begin, so I headed back in…

Returning to the venue floor; Well, my bag still in the same spot, but people had basically taken spots all around it, leaving me very little space at all. Jerks! I grabbed my bag and moved over to the left side where the parents were standing. In fact eventually Miyabi’s mother took the spot right next to me, so we chatted a little bit during the show. But yeah, this was a much better spot. Eventually the group Kage-ana started, and the girls started us on a chant before the lights went down and the members took the stage…

My two-top, Miyabi and Yuua

It was a full cast, meaning all my favorites, Miyabi, Yuua, and Ramu were there. Minyo Girls randomly alternate wearing their official outfits or casual clothes. For this event they were wearing their own outfits. As I mentioned, it was a pre-selected setlist from a fan request, and it was posted on the group Twitter account earlier this month, so we knew what they would be performing. I thought whoever won chose a very good setlist. I am pretty sure at least 3-4 of the songs he picked were also on my list, so in that respect it was a very good show. They have an intermittent problem in that venue though, every time one of the members leaned out over the front of the stage their microphone emitted feedback. They had their usual camera time during the fourth song, and although I was far back and not in a position to get any good close up shots, a few of my photos came out pretty good. However the biggest challenge for me is the two points in the show, the group photo and the VTR, where we have to kneel down. I am not a young guy, and my knees don’t work as well as they used to, so kneeling or sitting, and then trying to get back up can be a challenge. In fact, after the group shot I almost teetered over, and Miyabi’s mom grabbed my arm and saved me, LOL.

After the main set, the fans started a “clapping only” encore, which was quite strange. I think everyone was waiting for someone else to begin an actual chant. Finally, somebody did, but after saying “Encore!” just once the girls ran back on to the stage. This was the point of the show where we watched their monthly VTR, which was a preview of the “behind the scenes making-of” from their new single MV. Apparently it will be published on YouTube very soon. Next was the revealing of the single’s three jacket covers. I really liked the Type-B version. Finally there was an updated schedule of the group’s one-man lives and concerts through the next four months. Thankfully all of the one-man live events are scheduled for Shinjuku Marz, and not Yotsuya. But the real treat was the song selection for the encore… 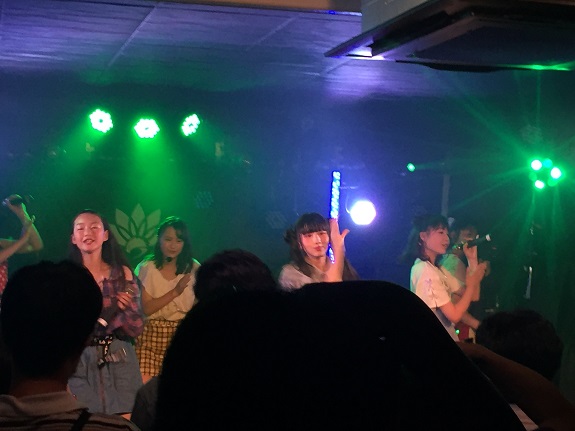 They sang three songs, the first two being c/w tracks for the upcoming single. I absolutely loved the first song. I don’t know the name, but it sounded a bit like an upbeat version of the Morning Musume song “Sukiyaki.” (google it) The second song was pretty good too. They finished the set with a new version of their first single, entitled “Kirari Yme Ondo, 2019 Version” It is completely different, to the point of hardly sounding like the original at all. And you know what? I kinda liked it! I’m guessing that might be another c/w track? I’m not sure. In any case, that finished the show.

A had no buppan tickets, and my throat was parched. I quickly headed to the bar for my prepaid drink, and then scurried out of the building while there was still a little room in the hall. Earlier I had noticed a popular burger joint nearby, so I decided to give them a try for lunch. It’s called Burg Holic, and is on quite a few lists of “Best Burgers in Tokyo.” I got their Chili Burger with a side of fries. My verdict? It was good. Slightly pricey, but the same price neighborhood as Shake Shack and Umami Burger, so no complaints. Anyway, I have no definite plans to see Minyo Girls right now. That said, they are beginning their promotional push for their upcoming single since it releases at the end of July. That means they should have quite a few mini-live events in the coming weeks, so I will likely be attending at least a couple of those.