(A Wasa-Holiday Weekend, Part I)

It wasn’t too long ago that I was lamenting about the lack of Wasamin singing events in comparison to previous years. It’s not like she is slowing down though, since she has a big television presence these days, as well as regular radio appearances. However, her management seems to be quite busy lately, since the past two weeks has seen a huge number of mini-live events scheduled for the next six weeks or so in promotion of her 8th single re-release, many of which will be in the Kanto Region.

This is a 3-day holiday weekend in Japan since Monday is Marine Day, a day of giving thanks to the Sea and its importance to Japanese culture. Wasamin has scheduled three events, one for each day of the weekend. She sent out a tweet late last week hoping that her fans would consider spending the holiday weekend with her. Personally, I was “all-in” on that plan, kicking off on Saturday in Tokorozawa. 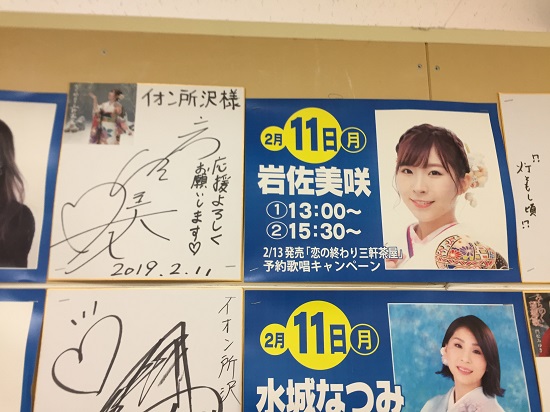 Tokorozawa is probably most famous for being the site of Met Life (Seibu) Dome where the Seibu Lions play their home games. Of course it was also the site of AKB48’s first “Dome” concert in July 2011, as well as a few SKE48 handshake events. To me it is also known as the hometown of a really good Japanese microbrewery, but you would need to read my Facebook to find out more about that. Since Wasamin would only be performing one late-afternoon set I headed out around 2:45, giving me plenty of time to get there. I almost hit a snag when I tried to make my transfer on to the Seibu Ikebukuro Line. The train was absolutely packed. WTF??? Was there a game at Seibu Dome? I didn’t see anyone wearing any baseball gear, but I found it hard to believe that this particular train would be so packed in the middle of the afternoon unless something was going on. And there was no freakin’ way I was not getting on. So after cruising the entire length of the train looking for a spot, a forced myself into Car #2. It wasn’t going to be the most comfortable ride, but it was only twenty minutes or so.

When I got off at Tokorozawa I noticed a couple people wearing Bump of Chicken T-shirts. Then, as I left the station I noticed more Bump of Chicken. Jeez, they were everywhere! This explained it. I checked the concert schedule and sure enough, Bump of Chicken 2019 Tour opening night at Seibu Dome. I made my way toward the mall down a narrow shopping street filled with bars, clubs, izakayas and all sorts of other food options; definitely the place to be in Tokorozawa. Approaching the mall I met up with a couple other Wasafans at the traffic light who guided me to the event location on the 4th floor. It was a huge stage area adjacent to the Vanda Records location hosting the event. Judging by the big “wall of fame” inside by the sales table, they host events here quite frequently. In fact both Wasamin and Minyo Girls have performed here on multiple occasions, so it’s surprising this was my first time there. Anyway, the line was too long for purchasing CDs, so instead I camped out a spot, put on my Wasa-Happi, and filled out a pre-order form to turn in a little later. After an eventful soundcheck where they almost blew out everyone’s ears, it was time for the event. Here’s the setlist… 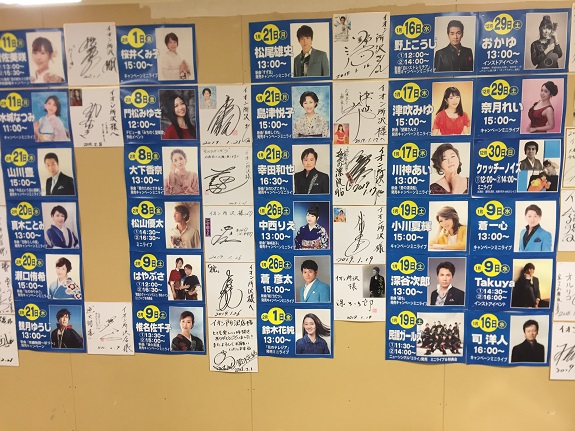 Part of their “wall of fame.” It is actually a pretty big wall.

By the way I forgot to mention it was really hot in this venue. Everyone was sweating, including Wasamin. Probably one of the funnier parts of her MCs was after Toshishita no Otokonoko, she asked if there was anyone dating a younger guy (or vice-versa) in the audience, and a young couple standing off to the left raised their hand. The girls seemed kind of embarrassed, although the guy was pretty enthusiastic, LOL. Since I was standing very close to the sales booth, I took advantage of there being no line during the first MC and quickly bought my CDs and grabbed my handshake tickets. I had three, two for a shamekai, and a third for a regular handshake. As an added bonus, throughout the event quite a few people wearing Bump of Chicken gear came over to watch Wasamin sing. Some of them just came over, checked it out for a minute or two, and then left, but a few stayed, which I thought was pretty cool.

The line got big very quickly, but after toweling myself off I headed to the end of the queue. It seems that when they aren’t using this area for performances it is the location of discounted used vinyl, as well as a bunch of gacha machines, all of which were next to impossible to win since they offered some nice prizes (all day Disneyland passes, airPods, PSP’s, Nintendo Switch) A few of the fans gave the games a try, and of course nobody won. Eventually my turn to see Wasamin came, and while I waited for her to finish with her previous guest I was practicing the hand motions to ‘Otokonoko.’ After confirming with Ichikawa-san (Wasa-manager) that I was going it correctly, I suggested it to Wasamin. 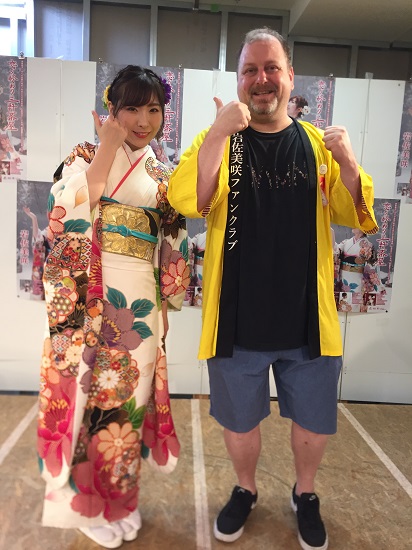 I told Misaki-chan that I was excited to be spending the entire weekend with her. She replied “Honto, you are coming to all of the events?” Yes. “Moriya too?” “YES! And afterwards we are going to the Wasamin club room in Sangenjaya!” I emphatically explained my plans to her. Yatta!!! I promised to return, grabbed my bag, and went for a walk. The line was still pretty long. After pretty much touring the entire mall, I returned to find the line still fairly long. I sat down for a few minutes before finally queueing up.

(Handshake #2) The moment I greeted her, she immediately inquired to my current situation in Japan adding that she was worried about it. I replied I still haven’t nailed down a full-time job yet, and was seriously thinking of leaving. But after talking with my father I decided to stick it out a while longer, and see if I can make something happen. She pleaded with me to do my best, and I told her I was. At the end, just as I was leaving, I exclaimed to her “Wasamin help me!!!” LOL But wasn’t that sweet? She is sincerely worried about me. That’s why she is my #1 girl!!!

Anyway, I stuck around for the end of the event, then walked with the rest of the fans back to the station. I grabbed a quick dinner in Ikebukuro before heading home. Sunday’s event is also in Saitama, but on the other side of the prefecture. I have been to Nittoh Mall a few times before, which is connected to the station, so Sunday’s forecast for rain shouldn’t be an issue.