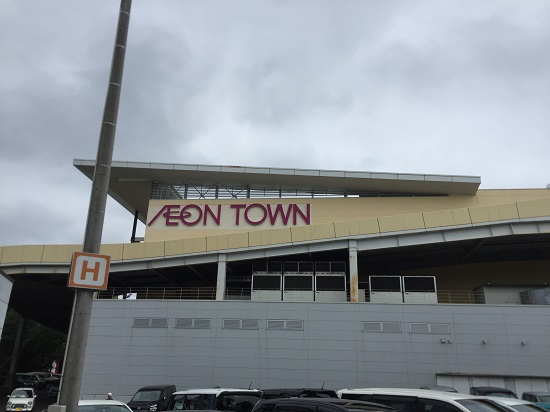 For the finale of Wasamin’s three-day performance extravaganza, I headed out to Moriya in Ibaraki Prefecture for her mid-day performance. As with the other venues she appeared at this weekend, she was sharing the stage with other performers, specifically two enka artists, Sakurai Kumiko and Matsuzaka Yuuki. Despite the event being all the way out in Ibaraki, it wasn’t too far from Tokyo, just 35 minutes from Akihabara via the Tsukuba Express. I headed out early to grab some lunch before the show, arriving in the middle of Sakurai Kumiko’s set. The stage area was packed, which made me realize that the locals had staked out the seats for the entire day. So it would be virtually impossible to get a seat for Wasamin’s show. 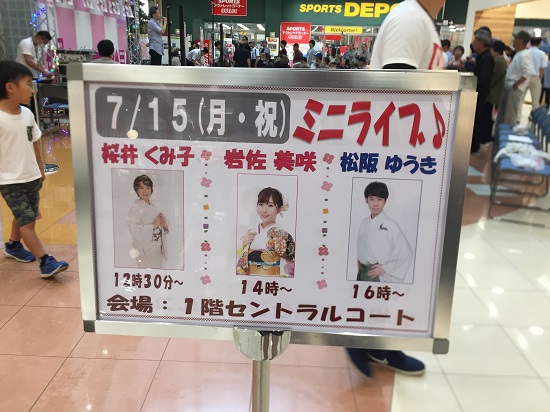 No matter, I hung out in the food court until it was close to the start time, then grabbed a standing spot just beyond the seats. I noticed an elderly couple behind me, and offered them my spot. It turned out the man spoke reasonably good English, and we ended up talking for a few minutes until the show started. He told me it was his first time seeing Misaki-chan perform, but he and his wife watched some of her videos on YouTube before before coming out. Finally Wasamin took the stage. Here’s the setlist… 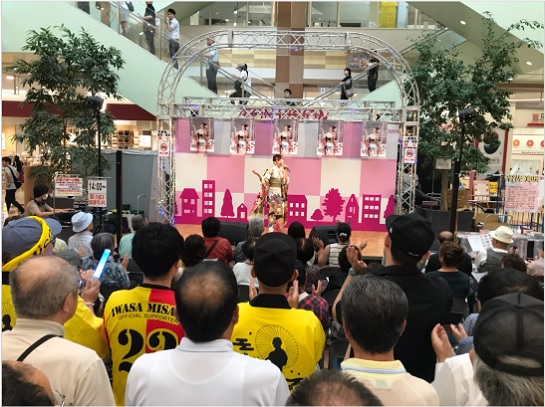 By the way, they were playing the new c/w tracks from the upcoming release before and after her performance, including Tonde Istanbul and Fuyu no Riviera. These are the two songs I am really anticipating, so it was nice to get a preview. (BTW, I think they both sound great) Moshisora is probably the least performed of all of Wasamin’s singles, so it’s nice to hear her pull it out once in a while. Ginza Kan Kan Musume is always a crowd-pleaser too. Her MCs were quite interesting, Wasamin spent the first MC talking about the holiday. Once in a while a few fans will respond to her with “Sou Desu ne!” Usually it is one or two people, but this time it sounded like a dozen people shouted at her in unison, which totally cracked her up. She was also promoting her October concert with Hayabusa and Tatsumi Yuuto. In fact, they were selling tickets on-site. However, I stuck with purchasing two CDs for one 2-shot and handshake. 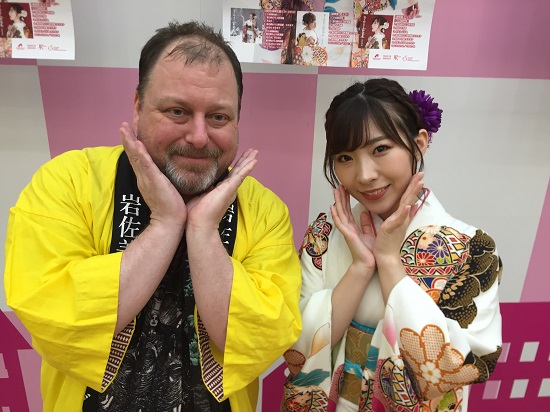 Wasamin once again brought up the whole Wasamin/Wasabi thing. So I decided to reminisce about her old T-shirt. But before that I again asked for a close-up vertical 2-shot, since I really liked the one we took on Sunday. I usually ask for something that emphasizes her pretty smile. Anyway, I asked her if she remembered the shirt, and she responded “Natsukashi!” I told her that I still have the shirt, but I have never worn it since it is too small. (It was one of those infamous Japanese ‘free size’ shirts, which is technically a ‘medium’) Wasamin countered that rather than the shirt being small, it is because I am a big guy. Well…yeah. But thanks for reminding me Misaki-chan. I also thanked her for playing the new tracks, and told her I would see her next at her boat cruise event next weekend.

I went for a walk around the mall, waiting for everyone else to finish so we could head out to Sangenjaya together. Our reservation was for 6 p.m., but we would be done a lot earlier than that, so we called ahead to move our reservation up an hour. In the meantime as we were walking back to the station we stopped at these random vending machines about a block away. I never knew this before, but apparently these machines offer tickets for the Tsukuba Express at a considerable discount, like almost 20% off. Quite the deal. So despite all of us having an IC card, we took advantage and purchased one-way discounted tickets back to Tokyo. I’m not sure if every station has them, but there were a bunch of these machines in the vicinity of Moriya station, so there’s another pro-tip for ya… 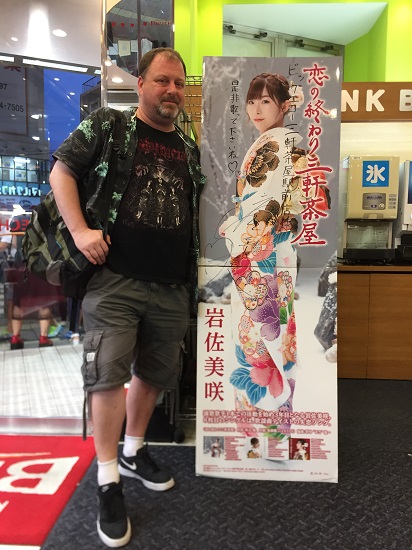 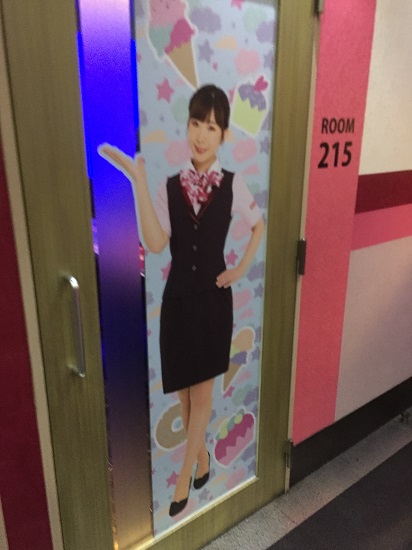 Sangenjaya is pretty far from Moriya, but surprisingly it only took us two trains and about one hour to get there. We arrived at BIG ECHO around 5 p.m. and the fans asked if I brought a single with me. (I did) It turned out if you presented a copy of Koi no Owari Sangenjaya they gave you a free clear file and coaster. I received these items at one of Wasamin’s previous events, so now I have two of each. We headed upstairs, and into the anticipated Wasa-room. 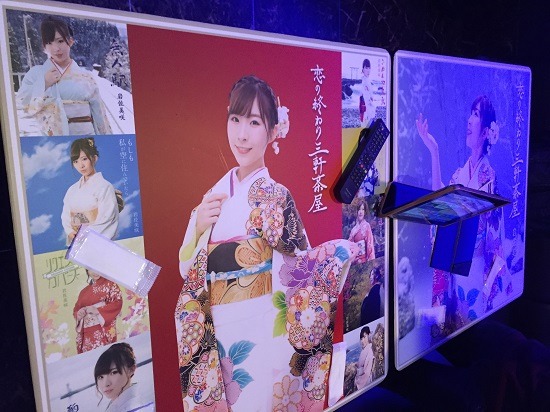 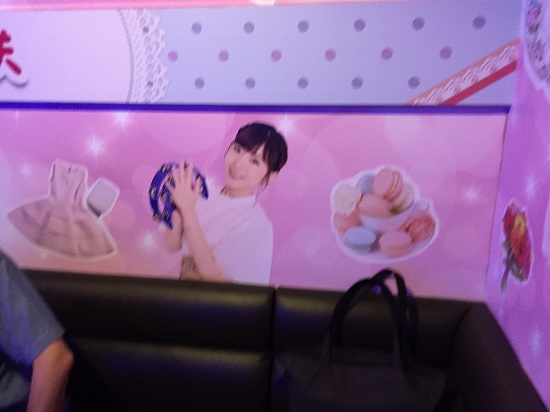 I never noticed before, since the only other time I saw the room the door was open, but there is a “not quite life-size” picture of her on both sides of the door. Once inside, the back wall is adorned with pictures of her, and various things she likes. The two tables have photos of all of her releases. BTW, I’m not sure why, but the floor was really sticky. I asked the other fans why this was, but they merely shrugged. So we were in the room, ready to have fun, and then came the next surprise… 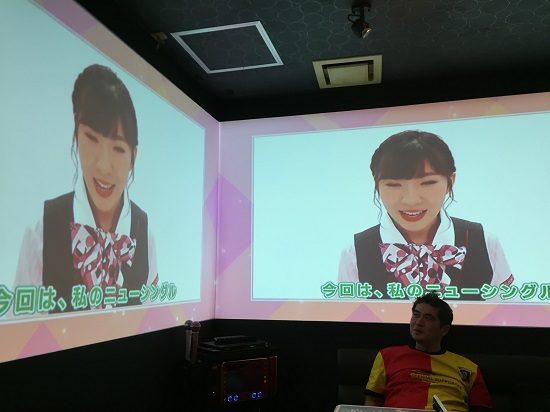 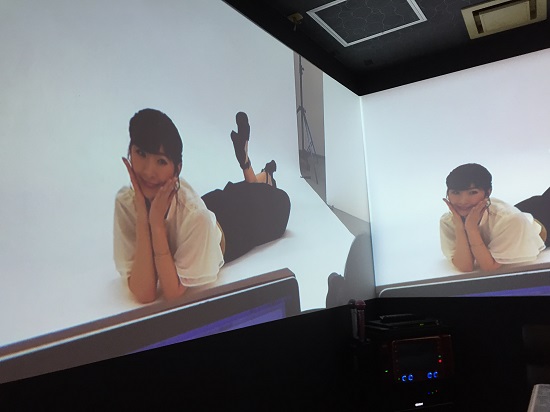 First of all, the room has two gigantic screens, taking up the entirety of two walls all the way to the ceiling. So the viewing and karaoke experience were incredible. The other surprise was the existence of six exclusive Wasamin mini-movies. The first was a “welcome” video with Misaki-chan explaining the features of the room, and why it came to be. The second is a ‘making-of’ of the photoshoot they used for the posters, clear files, and wall decor. The third was a “how-to” do the hand motions Wasamin does when she performs Koi no Owari Sangenjaya; something all of us Wasafans are already familiar with. 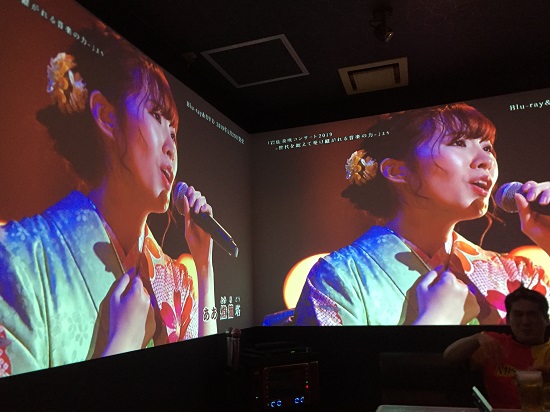 The last three videos were select performances from Wasamin’s January concert at Tokyo Kinema Club, specifically Sado no Ondeko, Koi no Owari Sangenjaya, and Tomonoura Bojou.We watched all six videos while sharing two rounds of beer. The came karaoke time. It turned out everyone there had accounts with LIVEDAM. I tried to make an account, but my internet was running too slow, so I gave up and sang on Shim-san’s account. We mainly sang Wasamin’s songs, including Seikaku ga Warui Onna no Ko, which is the song she centered for Future Girls on the Kokoro no Placard single. Interestingly, we dutifully did the Wasamin calls during the songs, despite her not being there, LOL. 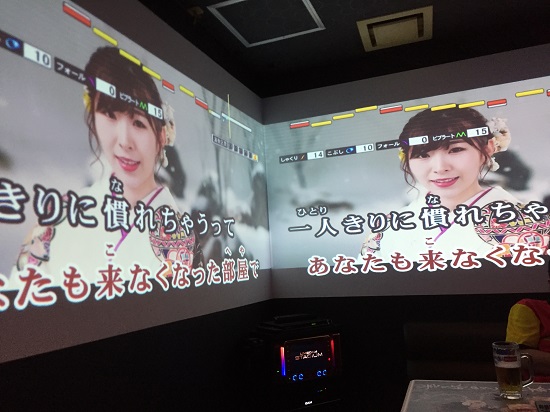 Eventually our two hours were up. We paid our bill, received out clear files, and headed out in search for dinner on the famous restaurant street nearby. Originally we were going to eat motsuyaki, but that particular restaurant was packed. We eventually found another Motsu restaurant mid-block, which was able to seat us immediately. The motsu stew, daikon soup, and motsuyaki were all wonderful. I would definitely hit this restaurant again given the chance. 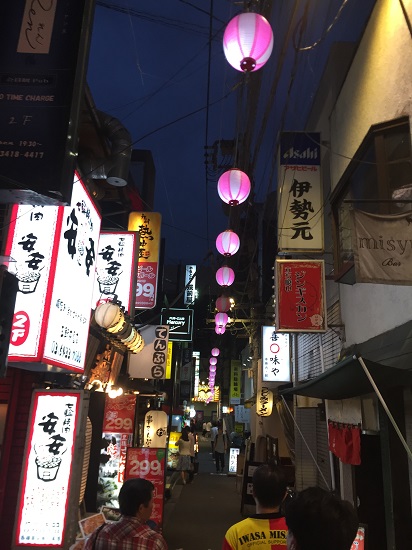 It was a long day, filled with food, booze, karaoke, and Wasa-fun. Next weekend is Wasamin’s fan club boat cruise, which if it is anything like the last one, should be a blast. I am really looking for ward to it.