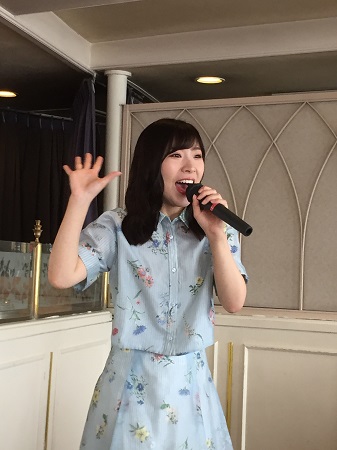 It seems like Wasamin special events are happening a bit more often lately, as this is the fourth special event I have attended in the past two months. Granted, for two of those events I had to apply and win via lottery. But still, it amounts to a lot of up-close and personal time with Misaki-chan, which is one of the things that makes her fan club so great. This was not the first “cruise” event she has offered. Back in December of 2017 we did a lunch cruise aboard a Yakatabune, which is one of those traditional-looking boats you see quite often on the Sumida River. And let’s not forget her performance on the ferry boat from Niigata to Sadogashima. Both wonderful memories. This event would be aboard the Vingt Et Un, a much larger ship specializing in meal cruises. The route goes from under the Rainbow Bridge in Tokyo Bay out past Haneda Airport, then turns around and comes back via the same route. I had no idea how the food would be, but spending a Sunday afternoon with Wasamin aboard a cruise ship would surely be a fun time. 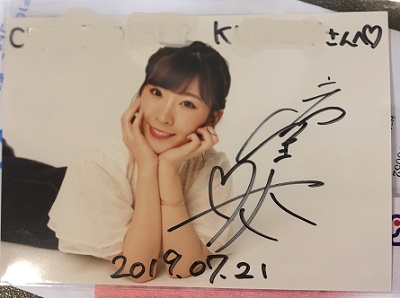 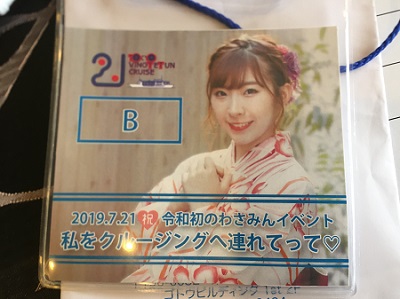 I arrived at the passenger terminal just after 11:00 am, check-in had just started, and our boarding would be between 11:30 and 11:45. I received my boat ticket and a personally signed photo. Some of the fans I am friendly with were comparing their seating assignment, and it seemed we were all seated at different tables. We were called into the boat by which room we were in, the Wasamin group being called in last. It was a bit of a walk from the terminal to the ship, but eventually we got a glimpse of it from the back. The banquet-style room we were in was directly to the right of the ship entrance. Everyone scurried around looking for their table. My assigned table was toward the back on the left side. However, we were next to a window, so that was nice. We were immediately offered a choice of soft drinks, I chose oolong tea, and a short time later the boat left the dock. We were off! 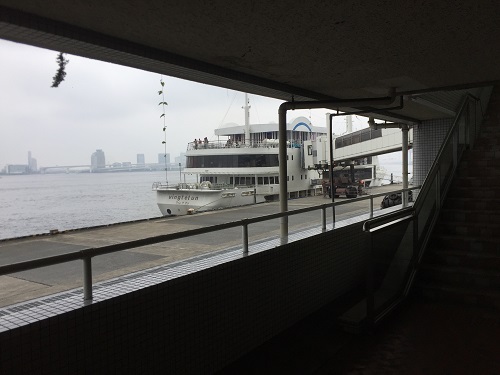 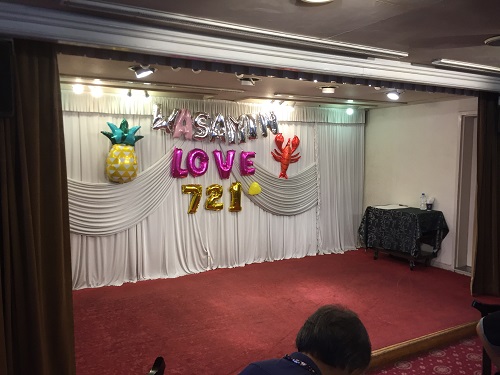 A man took the stage who identified himself as Wasamin’s manager from NagaraGroup. Huh? Has Wasamin changed managers? All of her staff were different too. I’m not sure if this is a permanent change or not, but Ichikawa-san has been Wasamin’s manager for almost six years, and has developed quite the rapport with the fans. I guess we’ll find out in the coming days if it’s a permanent switch or not. In any case, he led us in a Wasamin chant, and she came out wearing a light-blue one-piece dress. She looked very fresh. After a few introductions, and finding out who traveled furthest for the event, she announced she would be spending time visiting each table during the lunch. She had 19 tables to visit, and she sat at each table for around five minutes, so this took up most of the cruise. Speaking of lunch, this is what we were served… 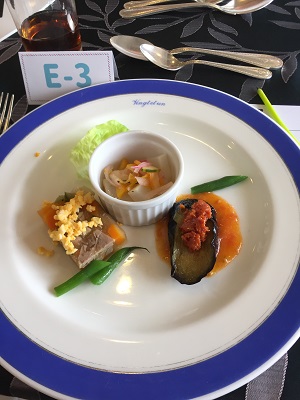 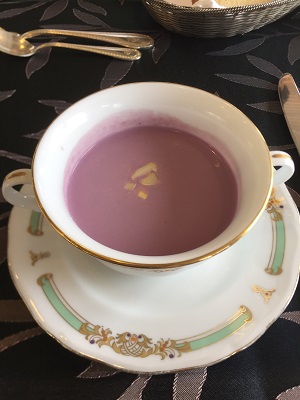 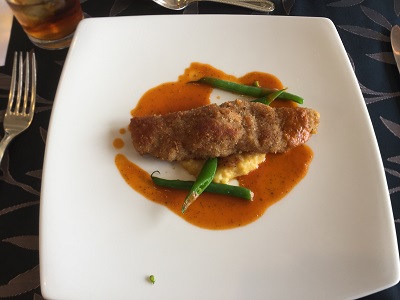 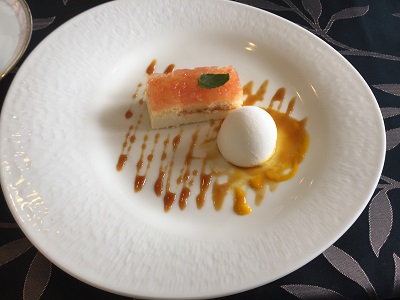 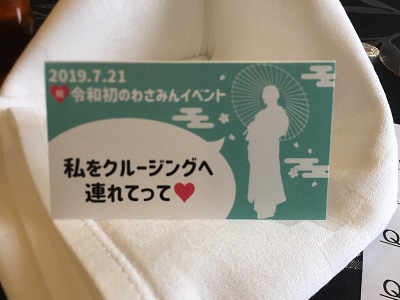 To be honest, the food was just okay. The highlight of the appetizer was the eggplant, which had a spicy and tart sauce. I’m not sure what was in the cup, it may have been squid, but it was nice. The tuna/egg thing is not something I go for. The cold sweet potato soup was actually quite good. As for the main course, it had been quite a long time since I have eaten veal, and from what I gather it is not a common entree in Japan. In fact, I saw a lot of plates go back with the veal barely eaten. It just seemed to me like the veal was overcooked. At the end of the day it wasn’t the greatest meal. But we were there mainly for Wasamin, the food was secondary.

Since I was at Table E, we were the fifth table she visited. (She went in alphabetical order) They pulled up a chair for her, which by the way was right next to me, and she sat down to visit with us for a few minutes. It turned out that of the six of us seated at my table, three were going to one of her fan club events for the first time. Ha, I was wondering why I only recognized one person at our table. Wasamin pointed out that by comparison I had been to every fan club event. But I corrected her, pointing out that I missed the first fan club meeting and the first bus tour since I was out of town, but I had been to every one after that. She also asked if anyone had been on a cruise ship before, and I was the only one to raise my hand.

She finished visiting the tables during dessert, and it was time for the Wasamin quiz. This time she would be shown a photo which she would need to draw, and we would have to guess what it was. Five winners would get a signed cheki. I am notoriously bad at these quizzes, especially with the language barrier, but I gave it the ole’ college try. The answers were Sakamoto Ryoma (historical figure) Tokyo Sky Tree, Lupin III, and Sazae-san. I got zero correct, although I am familiar with all four. I guessed Oda Nobunaga for the first drawing, and I thought about guessing Sky Tree for #2, but she drew it so strangely like it was a Russian Onion Dome. I had no idea for #3 and #4, but I thought #3 looked like James Bond, LOL. Ultimately 16 people got all four correct, so they decided to quickly take eleven more chekis for her to sign so everyone could get a prize. After that it was time to sing. And like at one of her concerts, this portion of the show was “Camera O.K.” and she would roam the room so everyone could get good photos. Here’s the setlist… 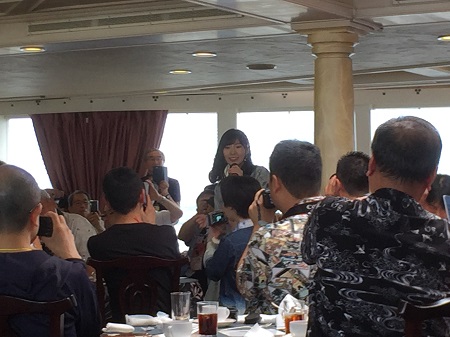 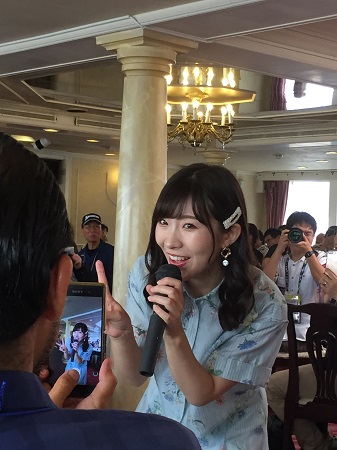 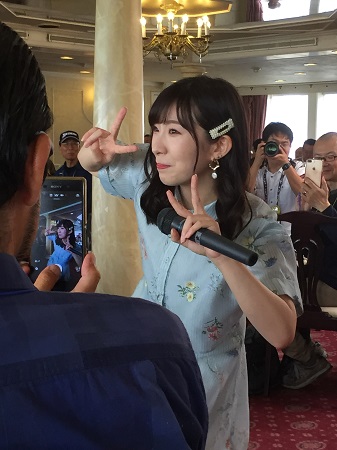 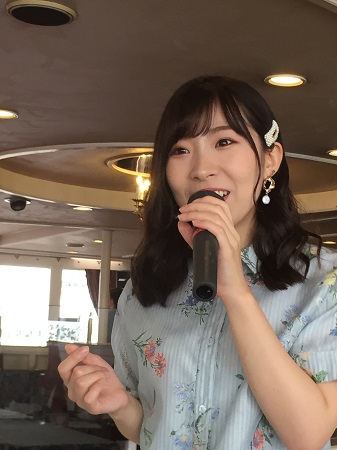 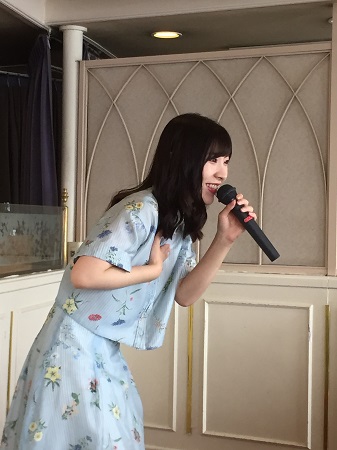 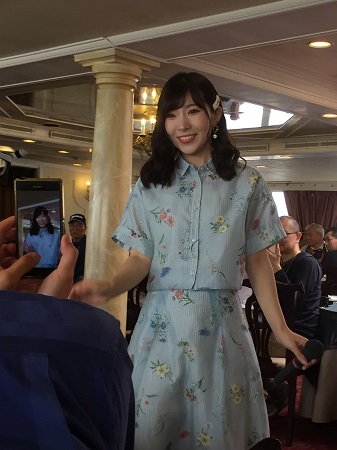 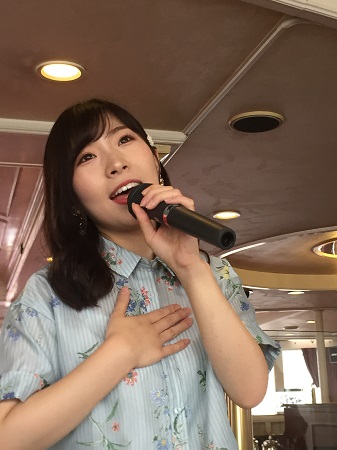 She did two laps around the room, and stopped in front of each table more than once, so everyone got a lot of good closeups. Plus the lighting in the room was nice, so the photos came out quite well. By the time she finished the boat had already docked, and we were the last group set to disembark. So Wasamin thanked us all for coming, and hoped we had a good time and a nice lunch. I was pretty close to the door, so I was one of the first people off the boat. I headed straight for Hamamatsucho Station and Komazawa Koen, where I was meeting a friend at Oktoberfest.

Despite the food being just okay, it was a really nice event overall. I mean the main point is spending quality time with Wasamin, and despite there being 116 fans aboard, I think she did a great job making sure everyone got to talk with her for a while, and got good closeup photos. Ultimately if she scheduled another one of these events tomorrow I would go in a heartbeat. As for the cruise itself, it is a really nice boat, and I am sure in nicer weather, and in the evening it is a very scenic cruise. But Sunday was quite dreary, which took away from the views. Not that it was a big deal since Wasamin kept us busy pretty much the entire time. So if I were to recommend this cruise I would say 1) take the twilight sailing, it’s the same price as the lunch cruise. (Dinner cruise is considerably more expensive) and 2) don’t order the bargain meal, go for either the Rainbow or Gold meal. Their menus are online, and you can tell just by looking that they have nicer entrees and appetizers.

With her ‘special edition’ of her 8th single coming out in early-August, Wasamin has quite a few live appearances coming up over the next three weeks, with quite a few events in Kanto. Plus, she has a special “talk and photo” event on August 4th. So lots of Wasafun on the horizon.