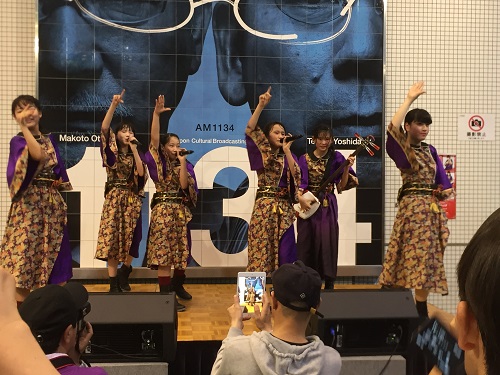 Part of the reason I decided to skip Mingaru’s July 1-man live was because I knew they had a bunch of free mini-live events coming up in support of their 3rd major single release. What I like about their mini-live events (aside from them being free) is that their buppan system is simplified in comparison to their system at other shows. Moreover, the tickets are ultimately cheaper as you get one with each CD. Of the various events on their schedule in the coming days, I had this particular event marked as a ‘must-go’ since it is relatively easy to get to from where I live, and the stage location, just off a major road and directly across from Hamamatsucho Station makes it fun to watch the various people who stumble upon the event. Anyway, the event began at 18:30, so I headed out early to grab and early dinner and a couple brews at Devilcraft before walking over to the show.

I left the restaurant at around 18:10. Usually it is only a five-minute walk from Devilcraft to the broadcast center, but the construction of a huge office complex next to the station has blocked many of the roads, forcing me to detour three blocks south to access the main road and double back to where I needed to go. In fact, I was walking up to the stage area around 18:25 to find Minyo Girls already performing their new single. Huh? I thought the show started at 18:30. Did I have the time wrong? Did I miss the show? If so, too late to do anything about it. I took a standing spot just beyond the 25 or so seats they had put out for fans. There weren’t very many people, so it was easy to get a good spot. As I arrived Miyabi-chan immediately noticed me in the audience and gave me a sort of smirk. I had a feeling I knew what that was about. Ultimately it turned out this was just a ‘rehearsal’ song for the main performance as Miyabi announced they would return to the stage at 18:30. 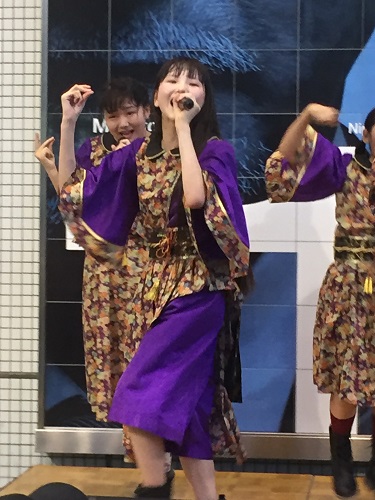 I decided to use the time to make my CD purchases. The CD table was manned by the staff from Yoro-do in Asakusa, who also support many of Wasamin’s events. Interestingly, this was furage day, but they were out of one of the three versions of the single. I’m not sure why, perhaps that shipment hadn’t arrived yet? I mean the crowd was small, so there is no way they ran out due to demand. The were a few people at the event who had that version (the one with the anime cover) but most people only had the other two. Oh well, I already pre-ordered that version anyway, so I have it on the way. 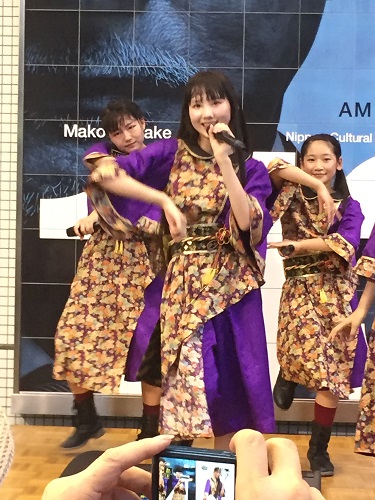 Miyabi (with Minori and Yutori)

The members returned a few minutes later to begin the regular set. Six of the nine were there (Rio, Matsuri, and Yuua were out) You could tell the girls were suffering in the oppressive heat and humidity as some of them were noticeably sweating, especially Ramukyun. Interestingly, I found the weather somewhat more pleasant than where I live. At least Hamamatsucho had a bit of a bay breeze working. Their setlist included selections from their new single, their second single (Mirai) and the Candies song Shochuu Omimai Moshiagemasu which they cover quite often. (That song and Valentine Kiss seem to be their favorite pop covers to perform) They had two MCs during the live, which they spent mainly promoting the single and some of their upcoming live events. 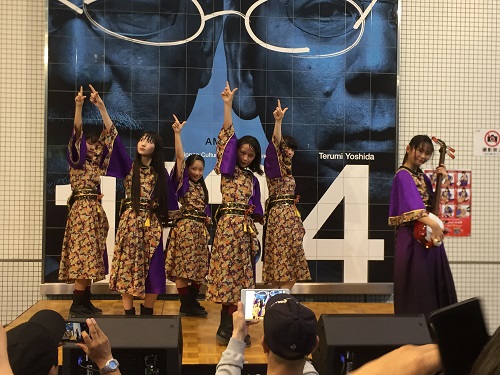 They did one “Camera O.K.” song toward the end. As I mentioned, I had a good standing spot so I was able to take a lot of nice photos. Literally what I do is just snap away, adjusting the zoom at various times to get closeups, then later go through and delete all the bad pics. I was able to get solo photos of everyone, although Yutori spent most of the song toward the back making it more difficult to isolate her. And of course I took a lot of solo shots of Miyabi and Ramu. A few salarymen and various people came by to watch the performance, including a few foreigners. At one point after the camera shooting ended a woman came rushing up toward the stage to take photos, but staff stopped her. LOL. 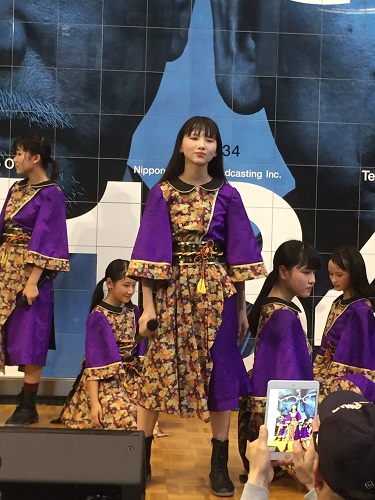 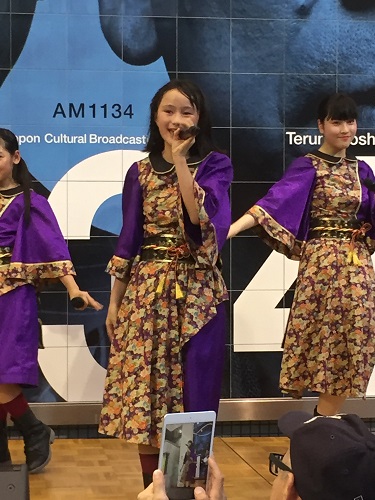 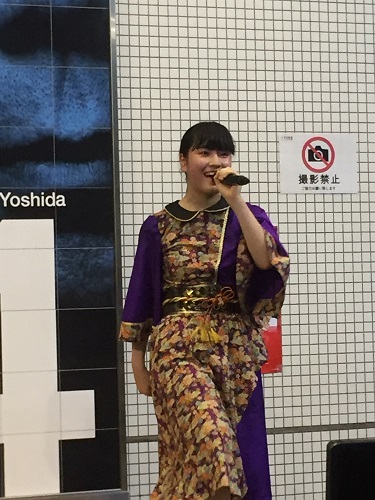 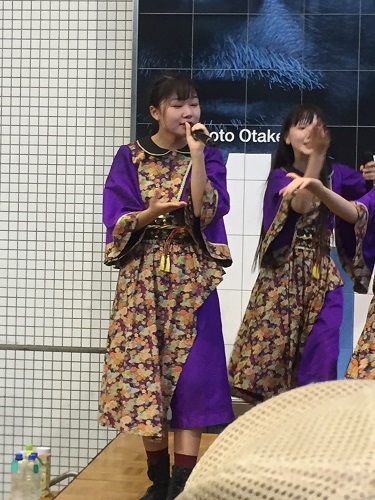 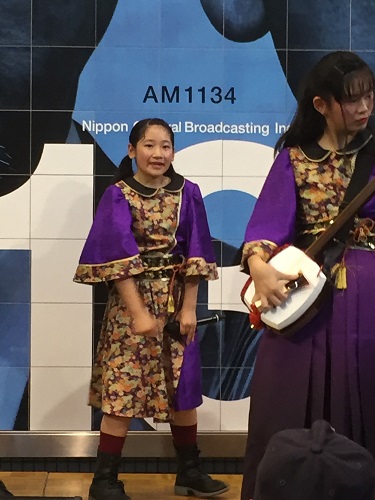 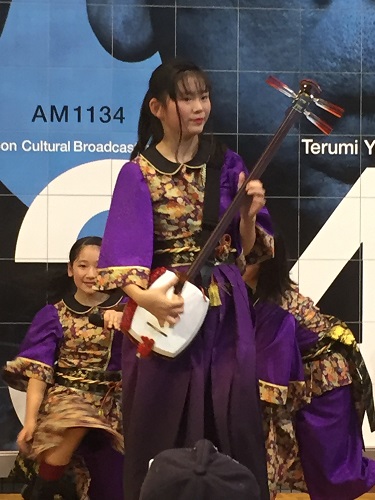 I had two tickets. I knew I would use one to take a shamekai with Miyabi, but I wasn’t sure what I would do with the second ticket. I decided for my first visit I would take a photo with us holding up the CDs. Then just before my turn their manager told me that my present from Miyabi is ready. At least I thought that was what she was telling me. I said “Really? Great!” This was the gift fans receive for completely filling out one of their point cards. It took me quite a while to get it filled out too! And by the way, I think this explained why I got that smirk from Miyabi earlier as it had been a month since I had last seen them perform, and I am guessing they had been waiting to give this gift to me for a while.

I’m glad the lighting was good for this photo. The last time I took a cheki at this location with Yuua it came out much too dark. In the meantime their manager came over and apologized to me, but I wasn’t sure why. Perhaps they didn’t have this prize with them after all? I told Miyabi that it was okay and began to walk away, but she quickly exclaimed “Chotto matte!” and a few minutes later returned with this… 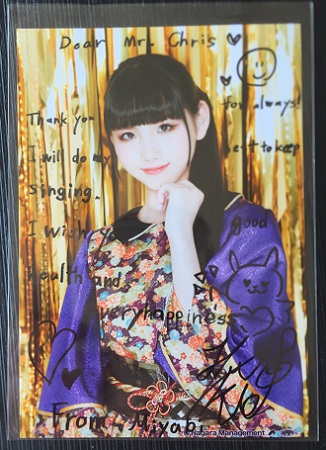 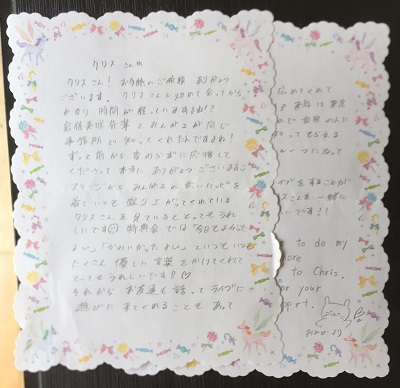 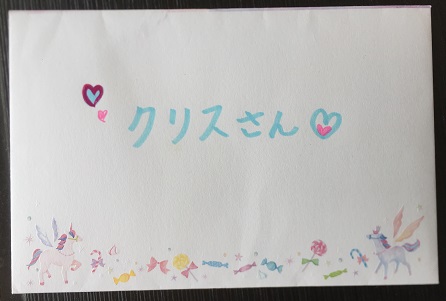 A photo completely signed in English, and a two-page letter!!! That is quite the nice gift! I quickly thanked her, and told her I would come back and see her again. Yeah, after this I would feel really sheepish using my other ticket on someone else. Although while I was in the queue for my second ticket Ramukyun smiled and waved to me. Awwww, I adore Ramukyun, my Mingaru “secret oshi.” But for me today was all about Miyabi-chan. 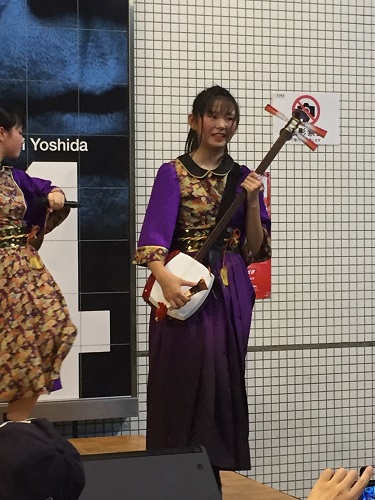 I went back and forth about whether to do another shamekai, or have her sign my CD. I decided on another photo so we could show off the letter, but I couldn’t get her to hold it correctly, LOL! She told me to be sure and read the letter. (I have, although I need to read it more closely since she wrote small, and I had trouble figuring out what a lot of the kanji were) I told her that I had already read the photo, and I would read the letter later that night. I also mentioned that her English was really cute, and that it was a great gift, thanking her repeatedly. 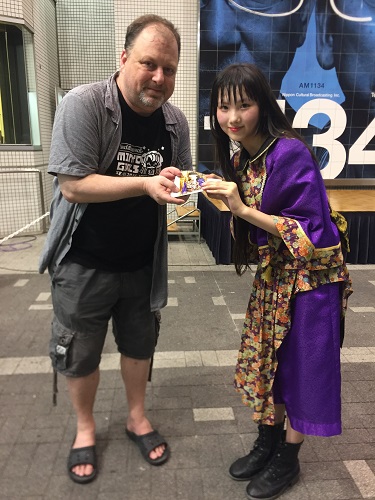 I decided to stick around for the end of the event since there weren’t many fans, and I figured the event would end fairly soon. After seeing them off I headed toward Tokyo Tower and Onarimon Station, which would take me home directly.

Minyo Girls have quite a few more events planned this week. I missed out on their actual release day event in Kawasaki because I had other plans. Right now I am thinking of going to their Sunday evening appearance at Sunshine City, but that will depend on a couple other things. We’ll see.