I’m not sure why they are calling this event “Volume One” since she did a similar event in Ebisu back in May. This was announced a few weeks ago, with tickets available exclusively on CN Play Guide There would be no singing, instead fans would be treated to talk, games, and photo-ops. It was virtually identical to the Ebisu event. Personally, I have a lot of trouble using the CN Play Guide, and after a few failed attempts I pretty much gave up unless like in Ebisu they made tickets available ‘on the day.’ Sure enough, staff made the announcement on Friday afternoon that if you showed up to the event they would sell you a ticket. Cool, I was good to go…

Tabata is relatively close to where I live. It’s a 9-minute ride on the Mita Line, followed by a two-stop ride on the Yamanote. The real challenge was the walk to the venue. It was about 10-minutes away from the station and much of the walk was uphill. Oh, and let’s not forget that this has been the hottest weekend of the year. I arrived at Tabata Station early, and decided to retreat to the local Beck’s for a cold lemonade. I had over 45-minutes until the doors opened. After quenching my thirst, I left the station for the venue, and after about 5 minutes of walking nothing looked familiar to me. I was almost sure I was going the right way since I double-checked the map before I left. But when checked on google maps it looked totally different. In fact, everything was the opposite from what I thought. I had been walking Northeast from the station, when I should’ve been walking Southwest. Luckily, I remembered seeing a McDonalds in the distance as I left the station which I remembered from Google Maps, so I doubled back and went the other way. I immediately spotted a few landmarks I recognized. Not only that, I noticed someone walking a block in front of me with a Wasamin jersey on. So I was good to go. Good thing I left extra-early. 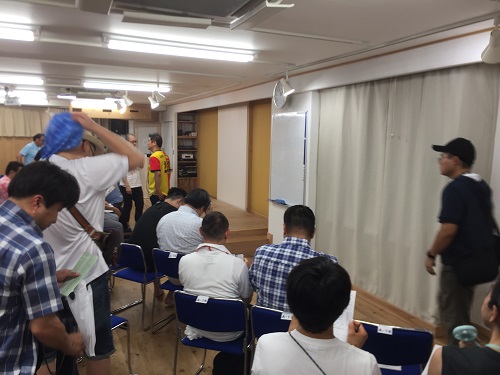 I arrived just as doors opened. The llne stretched into the alley, and I asked the staff member from Nagarapro if I had to go somewhere special to buy a ticket, but he informed me to just go through the regular line, and then tell the ticket-taker that you want to buy one. After storing my shoes in a locker (no shoes allowed!) I received a ticket for the third row on the far right side. I was also given one 2-shot ticket as a bonus for being a fan club member. I spent the next 10-minutes toweling myself off from the walk and drinking a bottle of water I purchased along the way. Despite my shirt being sweaty, I was otherwise cooled off and ready for the show. In the meantime I checked the goods table. There was nothing new, but I did pick up one additional 2-shot ticket.

Wasamin had posted what she planned to wear the night before, and boy did she look cute! It isn’t often she wears shorts like that, showing off her cute little legs. And I loved the Orion Beer T-shirt! After complaining about the excessive heat, she asked if there was anyone not yet in the fan club. But it turned out every single person there was, so she turned her fan club promotion into us enrolling our friends, LOL. After that they immediately started the Wasamin quiz. I am notoriously bad at these, especially since I sometimes don’t understand the questions. However, she announced that this quiz would be multiple choice. So perhaps I had a chance, even if I had to guess on some. The questions were as follows…

One person answered them all correctly, a fan from Osaka who apparently took the overnight bus to get to the event. Three people got five of six right, and 10 people got 4. The people who got four correct played janken for the last six chekis. I had three correct, so I just missed. The next segment was a Q&A segment. Questions were submitted through the Nagarapro website beforehand. I couldn’t think of anything to ask, so I didn’t participate. Although per usual, during the event I was coming up with all sorts of questions. Wasamin answered around a half-dozen questions. Some of the things we learned… 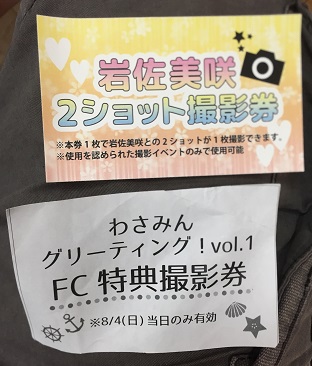 After that the talk portion of the event was over. It went by rather quickly. The remaining 90 minutes were dedicated to 2-shots. We had a choice of shamekai or cheki, and they assembled a sort of ‘beach scene’ complete with various beach related prop like rafts, inner tubes, snorkels, and balloons. They were calling us up by section and row, but they were doing it in a really strange way, almost like the manager (Yes, she has a new manager!) was randomly calling people up. He was trying to do it in some sort of order, but kept skipping people. At one point a couple people tried to re-queue for a second visit, but one of the staff ultimately stopped them. After doing every row but mine the manager said “so everyone has gone once already? NO! The guy next to me (who I was also next to on the boat cruise) both raised our hands, so we were the last two to go.

A few of the fans, upon hearing that Wasamin would be wearing an Orion Beer T-shirt, bought their own Orion shirts for the occasion. One of them brought Orion beer too, and left them on stage for anyone to use. Naturally this was going to be my choice, and when Wasamin asked what props I wanted to use, I said “Of course, the beer!” 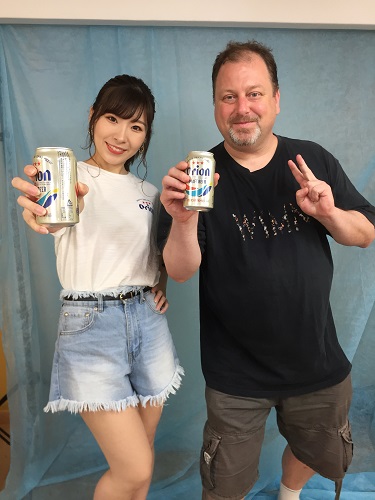 After telling Wasamin about getting lost on my way to the event, I asked her about the Spicy Yakisoba she bought in Hokkaido. She said it was good, and asked if I liked spicy food. (Wasamin, we have had this conversation so many times!) When I mentioned Mouku Tanmen Nakamoto, she was like “Oh yeah, you love spicy food, right? And you like Akakara Nabe!” I’m glad I jogged her memory.

I had one other ticket, and I was really thirsty. All the beer talk had me in the mood for a pint as well, so I didn’t waste too much time before heading back to the queue. There were a couple other props I was interested in using, including one that hardly anyone had used yet. By the time I got to the front I asked for the snorkel, and then asked Wasamin to grab the beer… 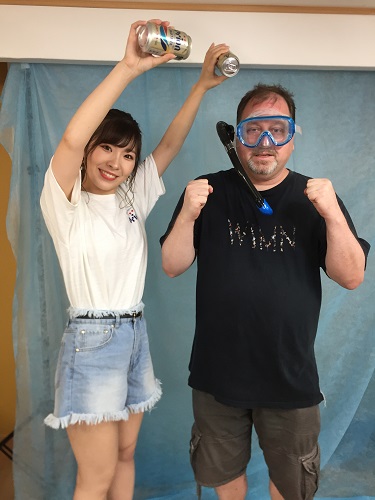 YES! This got a great laugh from everyone. I didn’t have time to adjust the strap, but I knew that if you put a snorkel on your face and inhale, it will suction itself to your face, which is what I did. Sp yeah, it came out almost exactly as I planned, except I didn’t put the actual snorkel in my mouth (for obvious reasons) After that I told her I am really looking forward to her new single release events this week. She has a whole bunch planned over the next 10 days, and I plan on going to a bunch of them!

And with that I was done. I grabbed my shoes and headed back to the station. I had plans to see Minyo Girls at Sunshine City in the evening, but that was almost three hours away. I contemplated going home and changing into a different shirt, but instead headed straight to Ikebukuro and The Hub for a cold beer.