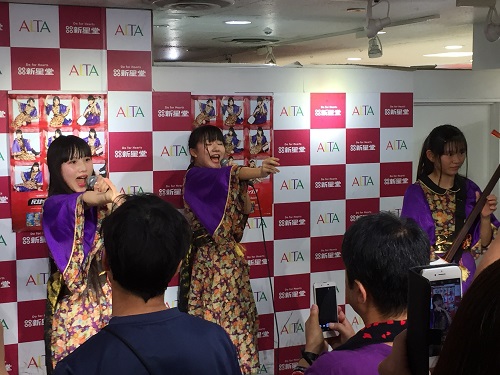 With Wasamin’s afternoon event ending around 4 p.m., and Minyo Girls’ nearby event scheduled for 6:30 p.m., I had a lot of time to kill. With the benefit of hindsight, I probably would’ve been better off going home and changing into a dry T-shirt, but I was thirsty, and in the mood for a frosty mug of beer. So I headed straight to Ikebukuro and my favorite watering hole to quench my thirst. However, one drink turned into five, and once it passed 6 p.m. I had a really good buzz going. So much that I misjudged how long it would take me to walk from Nishi-Ikebukuro all the way to Sunshine City.

After attending the Mingaru furage event on Tuesday, I skipped their next three events in Kawasaki, Shizuoka and Chiba, instead opting to see them much closer to where I live. The other nice thing about Sunshine City, aside from the plethora of restaurants inside, is there’s a bus stop just outside the mall that takes me directly home. So whenever any group I like plays there I do my best to attend. Anyway, I arrived at Alta, and checking my phone (which had been charging in my backpack) I realized it took me over fifteen minutes to walk over, and the show had already started by the time I made it to the shop. Not a big deal though as they were just beginning their first song. There were quite a few people crowding the back area of the store, but there was plenty of room closer to the stage, so I made my way inside and found a spot around five feet back. Five of the nine members were there; Miyabi, Ramu, Yutori, Minori, and Ryo. 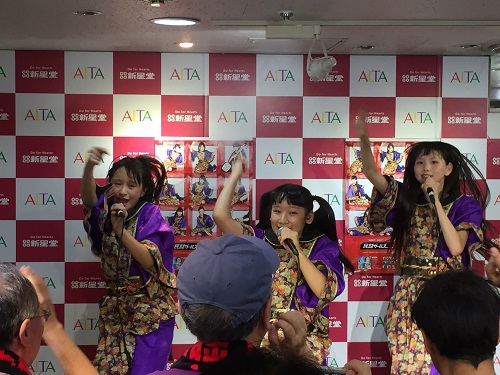 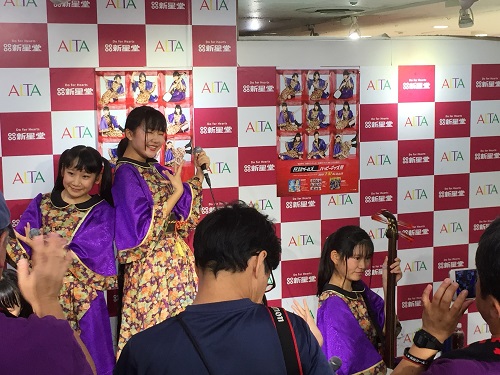 Being that I had a few cocktails in me, I had a really good time clapping along and doing the hand motions to the songs. In fact, much of the crowd seemed to be in a pretty lively mood. The group did a four song set, and despite this being a release event, most of the setlist consisted of older songs with the exception of their new single ‘Happy Days’ which they performed at the end. Probably one of the funniest parts of the show was when Ramu-kyun led an MC. In her usual form, and her baby-girl voice, she fumbled her way through the MC, and at a couple points I started heckling her a little bit, growling her name, LOL. But overall it was one of the better mini-live events I have seen Minyo Girls perform. They were extremely energetic, and drew quite a few people from around the mall to come over and check out who they were. 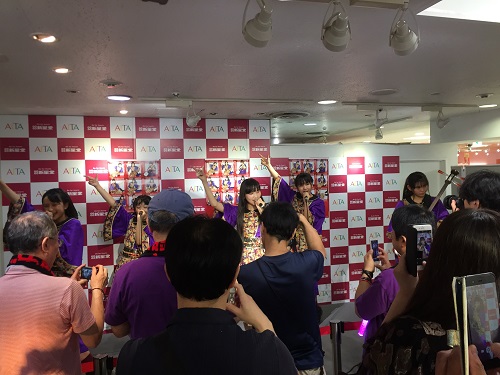 My view of the stage 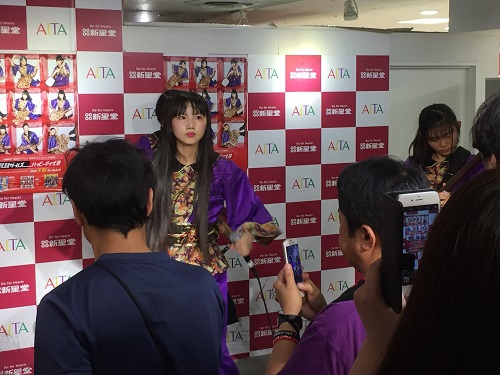 Although I was fairly close to the stage, it seemed everyone in front of me was tall, making it extra tough during the “Camera O.K.” period. But I did my best, and got a few decent shots. Immediately after the show I queued up to buy CDs, my plan being to get a Type-A version, and one other version. Except like on Tuesday, there were no Type-A copies. WTH??? Why is this version so difficult to get? So again I picked up a Type-B and Type-C. With my two tickets I planned on using one on Miyabi, but right at the end of the show Ramu-kyun smiled and waved to me again (she did it on Tuesday) so I decided the second ticket would be for her, and I told her as much. In the meantime Miyabi’s mom came over and said hello to me, and I was telling her about the nice letter I received from her daughter. I also mentioned my job-hunting escapades. Hey, you never know who might be a good connection!

So after the group shots were done I immediately queued up to meet with Miyabi. I took two 2-shots with her on Tuesday, so instead I decided I would have her sign one of the CDs. She asked if she should write small, but I told her she was the only one who would be signing it, so she can write wherever, and however much she wants… 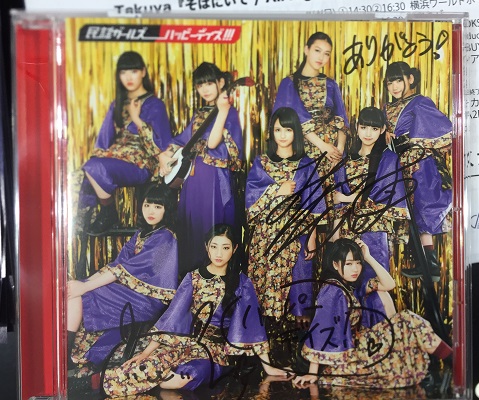 In the meantime, she asked if I had read her letter yet. I told her I had, but admitted that I had a bit of trouble with some of the kanji and had a friend help me. She apologized, but I told her not to worry about it since I loved the letter, and I was really happy to receive it, adding that her English was jouzu! 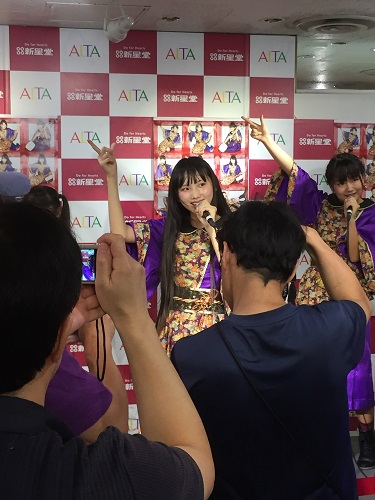 A short time later I queued up to meet with Ramu, although I am pretty sure their manager assumed I was going to meet with Miyabi again, and skipped by me when she was asking other fans who they wanted to see. Eventually I stopped her and told her I wanted to see Ramu-kyun (She kept repeating back Ramu-san) so she moved me to another queue to the right, it was just a couple minutes before it was my turn. I asked if a shamekai was okay. She said it was fine, and enlisted Minori to take the photo for us…

After thanking her, I told her that I really enjoyed her MC, and that her MC skills were becoming really good. I actually mean that, as goofy as she is. She still has that sort of robotic, baby-girl delivery, but she seems much more confident when she is on the mic, and also has a lot of fun, even reacting positively when the fans play with her. In any case, I was glad to have an interaction with Ramu again since I don’t meet with her that often. I grabbed my bag to take off, but Miyabi’s mom stopped me before I left…

I was quite surprised, but basically she was saying that she really hopes I get my job situation squared away since she really appreciates my support of Miyabi. I told her that I was doing my best, and that if she could think of anything to please let me know since I could use all the help I could get. the funny thing was a couple of the other mom’s kept leaning in to hear out conversation. I’m not sure what that was about exactly, but I thought it was kinda funny. After that I excused myself. As I mentioned, there are a ton of restaurants I like in Sunshine City; Soup Stock Tokyo, Tendon Tenya, Taiyo no Tomato Men, Saladish, but I decided on the Hawaiian burger joint Kua’Aina. A fine choice, even if my food took forever to come out.

Ultimately I don’t think I was acting overly foolish at the event, despite probably being more animated than usual. I was more worried about the smell of liquor on my breath. But I had a lot of fun. Usually a couple drinks get me into a spirited mood at idol shows, which is what I was going for. And it isn’t like Minyo Girls don’t serve alcohol at their monthly 1-man shows, they do! They have a few more release events coming this week. I may attend one. I’ll play it by ear.