Among my favorite places to see Wasamin perform is along the Nakasendo corridor through Saitama Prefecture. She performs in Saitama probably more than any other part of Japan, including Tokyo. In fact, if you take the Takasaki Line north from Akabane, you will pass close to 10 different locations where Wasamin has performed in the past, many of which she has appeared at on multiple occasions. The frequency in which I have traveled throughout that region to see her is probably the biggest reason why I have fallen in love with Saitama as a potential place to live.

The special edition of Wasamin’s 8th single released this week with three new tracks, two new jacket covers, and a pretty crazy tour schedule in support of the release. She began the tour with a furage event in Northern Ibaraki Prefecture, not far from the Tochigi Prefecture border. Then after a day off she performed in Tokyo, then at this event in Northern Saitama. This weekend she will be in Ishikawa and Toyama prefectures before returning to Kanto to perform twice in Saitama and once in Yokohama. After that she flies to an event in Kyushu, then finishes the promotion with two events in Yamagata. Oh, and did I mention she was just in Hokkaido, Kagoshima, and Aichi last week? Three weeks of hopping all over Japan, including a 13-day, eleven location whirlwind promotional tour. It is tiring just to think about… 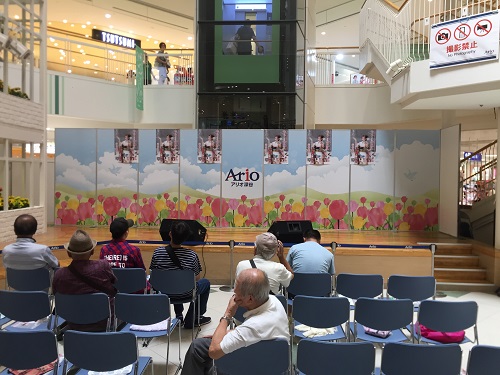 The glass elevator going up and down above Wasamin’s head was funny to watch.

I skipped on the furage day since PolePole City in Ibaraki Prefecture is pretty far away. But I had planned on going to both the Tokyo and Saitama events this week. That was until I won the AKB48 Theater show on Thursday. I decided since Wasamin is doing quite a few events I would skip Tokyo, and go to Saitama. Ario Fukaya is on the Northern end of Saitama Prefecture, not too far from Gunma. It’s about a 90-minute train ride from Central Tokyo on the Takasaki Line. However, since I live near Akabane it is not quite as far. In fact if I catch the once-hourly express train I can get to Fukaya in 58 minutes. The other nice thing about Ario Fukaya, despite it being fairly far from the train station, is that they run a free shuttle to and from the mall every 20-minutes. I ended up getting there just before 11 a.m. There were a few seats still available, so I grabbed one and then went to lunch. When I returned a queue had formed to purchase CDs, so I jumped in, picking up two copies of each version. This would afford me a 2-shot for each performance. I grabbed my seat and waited for the event to begin. Oh, the shows were scheduled for an hour earlier than usual, which is why I had to leave so early. At first I thought it was to give her more time to get to Ishikawa Prefecture. But I found out later that there was another event scheduled after her. Here is the first setlist…

It didn’t dawn on me until after I got there that she would be singing the three new tracks from the single, and she led off with my favorite of the three. I knew Fuyu no Riviera was coming since she teed it up by talking about covering male artists. I just love every time she performs it! Wasamin was wearing her navy blue kimono, and her hair back in a ponytail. It is among my favorites of her various hairstyles, and I do like that kimono. Luckily this was an indoor performance, as she surely would’ve been suffering in the stifling outdoor heat with that outfit on. She also had a good sync going with her fans, as we did the “Sou desu ne” bit, the “ehhhhhh!” bit before the last song, followed by the faux surprise bit when she announces the 2nd performance of the day. 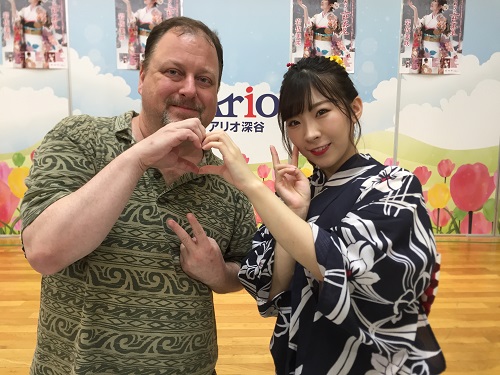 It’s a cute pic, but the angle makes Wasamin appear to be huge.

I immediately queued up for my 2-shot, figuring I would get it out of the way quickly and then have a longer break between shows. BTW, I ran into Wasamin’s new manager in the morning when I first arrived at the mall. I wasn’t sure it was him until he said hello to me. Hopefully he is treating Wasamin well. I know a lot of us miss Ichikawa-san, who treated us as if we were part of the family. The new manager is still getting his feet wet with us, so hopefully he will continue to develop a relationship with the fans as he gets more settled in his new role. Anyway, it was my turn. We did a “love” pose and then went to the table, where I gave Wasamin a bit of an update on what’s going on with me right now. She wished me luck, and said she really hopes everything going on turns out well. And with that I left to take a break.

I had almost two hours to kill, and I wasn’t hungry since I had lunch before the first show. I decided to walk over to a park across the street from the mall where I could play Wizard’s Unite for a while. (For those of you who play, the park had three inns and a fortress) It was still really hot, but I found a shady spot to sit for a while where I wasn’t too uncomfortable. After that I retreated to the Dotour for an iced coffee and a cool place to sit for a while. It was then that I noticed that this mall has a few transients hanging around. Mind you, it wasn’t nearly on the level of Kishiwada Talk Town in Osaka, which is an a really impoverished neighborhood. But as I learned in Kishiwada, the oddball crowd are ALWAYS drawn to the music when there is a live performance happening. In any case, I returned for the second show, and took a standing spot on the left side. The late setlist…

Despite this being the first week she is performing the three new songs from the single, most of her regular fans have seen her perform them at her concert earlier this year, as well as a couple of special events. Still, it is exciting to hear her add new songs to her mini-live rotation. Frankly, I was hoping she would sing Tonde Istanbul for the second show, but instead she sang Yurazu no Ame, which is the 2nd track on both versions. Wasamin mentioned how often she performs at this particular mall, and in this area in general going on to promote her Monday event in Ageo and her Wednesday event in Kamisato, both of which I am planning to attend. But she also regularly performs in Konosu, Kumagaya, Urawa, Kita-Toda, Warabi, and Omiya. She was also promoting the full set of her 8th single, including the original three versions plus the two new versions.

I decided to take a break before queueing up since I only had enough for one visit. I figured I would stay all the way to the end anyway. When I returned there was a huge queue next to the stage. Who were these people? Was there a rush on Wasamin CDs? It turned out this was the pre-queue for some ikemen volleyball group who were performing at 4:30 p.m. Eventually I found the comparably shorter Wasamin handshake line and queued up. And a few minutes later it was my turn…

Me shortly after my lobotomy

Wasamin immediately started engaging me in conversation while the staff member taking the photo kept asking me to pose. She kept turning to me, until eventually the guy said he was taking the shot, which is why both of us have odd expressions on our faces. Well, at least ONE OF US has an odd expression, LOL. It’s my “in the middle of talking” face. Not the first time, or the last time for that to happen. What Wasamin was trying to ask me was about my aversion to sunlight. This subject came up between us a few years ago at an event, and then again on her Yokohama Bus Tour. I am fair-skinned, with light eyes, so in many ways I am ultra-sensitive to the sun. In America I wore dark sunglasses, but that isn’t really a common fashion in Japan, so I have never worn them here. But yeah, the bright sun causes me quite a bit of eye discomfort, which Wasamin had remembered me mentioning before, so she asked how I was coping with the current heatwave.

I told her I would see her at Ageo before I left. I checked the bus schedule and the train schedule. If I left in the next five minutes I would be able to catch an express train back to Akabane. However, if I waited until the event completely ended I would have to wait for the next bus, and the catch a slower train back. I decided to watch the end of the show, and wave goodbye to Wasamin. By the way, one of the local crazies who I had seen around the mall all day went chasing after Wasamin as she left, but she fended him off quite well while remaining congenial and nice. Normally, Ichikawa-san (Wasamin’s previous manager) was really good at blocking these sort of intrusions, but her new manager didn’t seem to notice, or react to the situation. Nor did any of the mall staff. Ultimately everything turned out okay.

Then just my luck, one of the fans offered me a ride to the train station. I ended up getting there just in time to catch the express train after all, and was back in Akabane before 5 p.m. So everything worked out in the end. Here is Wasamin’s full release event schedule, for anyone who might be in town and wants to see her…

I will most likely go to both Saitama events. As for the Yokohama show. Well, that’s another mall that is nowhere near a train station, and a bit of a pain to get to. So I’ll play that one by ear.