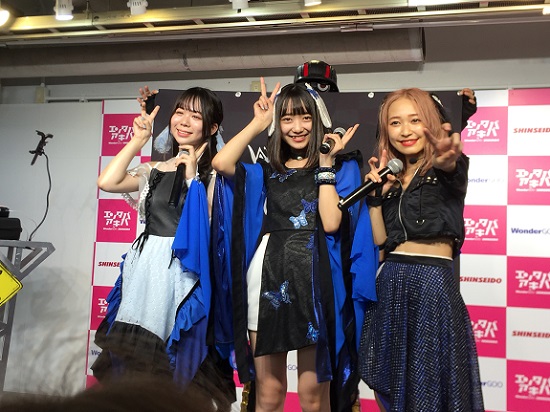 Ever since I had the chance to see DESURABBITS perform at A-rin Collection Idol Live event in Yokohama, and had so much fun with them during their buppan, I have really wanted to see them again.  In fact, after that event I combed through their official website, and through their official YouTube channel indoctrinating myself in their music, and their history.  Checking their schedule, while they perform semi-regularly, they had spent a great deal of the past month in Osaka, and the couple of events they did in Kanto were rather expensive. (around 5000 yen just to get in) However, with the announcement of a new single release they scheduled a handful of mini-live events around Tokyo, giving me a golden opportunity to see them.  Sunday would be their first such event in Tokyo, at a relatively new shop in Akihabara which specializes in live performances. 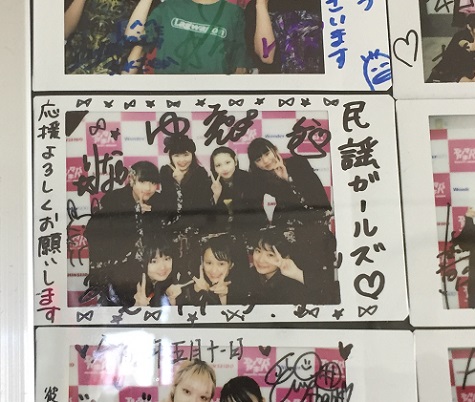 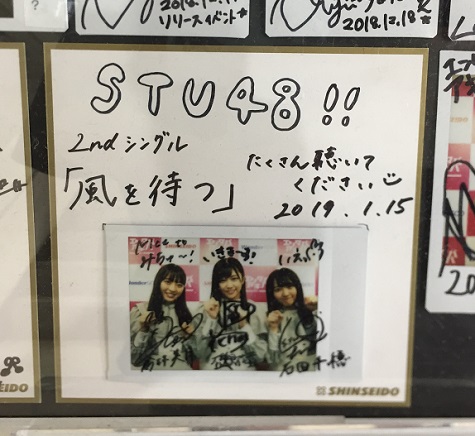 Minyo Girls and STU48 Photos from their appearances at Entaba Akiba

I arrived at the venue shortly after 6 p.m. and it was almost empty except for me and one other guy.  I could hear voices, and eventually found the event area where another group, Kazehikaru Fukurou were in the middle of their buppan.  I checked to make sure I was in the right place, and there was a sign promoting the DESURABBITS event just outside the door.  But I just found it odd that nobody was there, that was until I got home and found out that the group was doing an impromptu live just outside of Akihabara Station, and that’s where everyone was.  Damn, I wish I had known!

Eventually they put out preorder forms for DESURABBITS new single ‘Magic of Butterfly’ which is due to release next month.  I had seen the benefit list on the group’s official website; one ticket=handshake, two tickets=2-shot cheki, three tickets=5-shot photo with the whole group, four tickets=group shot plus sticker, and five tickets=group shot plus poster.  They also had benefits for purchasing 10+ CDs, but it looked kind of involved, and I wasn’t going to buy that many anyway.  I decided on the Three CD package, and would take a photo with the entire group.  After all, I don’t have a favorite member among the girls, my DESURABBITS oshi being Bucho, the guy in the paratrooper outfit.

There wasn’t really any order to how they were going to let people into the viewing area, everyone just milled around while the group’s staff did the longest soundcheck for an idol group I have ever heard.  It went for close to 40-minutes.  Meanwhile, as it got closer to the event time people began subtly jockeying for position to get close to the stage when they opened the doors.  Since I had arrived early, I knew where the entrance was for the previous group.  So while most everyone was milling around the center of the waiting area, I went to the far right.  Sure enough, that’s where they opened the entrance, and I could’ve scored a spot right against the stage had I chosen to run, but I ended up in the second row, just behind a short and wiry guy who had shown up at the last minute, and pushed his way by everyone to get front and center position.  Not that all DESURABBITS fans were like this,  In fact, when they noticed a few girls in the middle of the crowd they gave up their spots and moved back, allowing the girls to get a front row view.  Very cool!  Certain fans of other groups (ahem, Kiss Bee) should take a lesson from these guys. 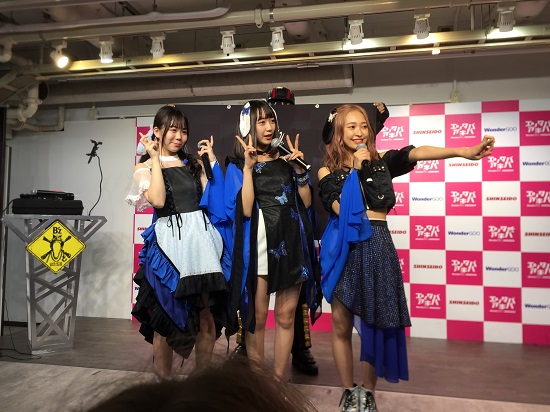 Bucho-san came out shortly before the event to check the crowd, which had filled most of the event space.  There were quite a few female fans there too, as well as a couple other foreigners.  Eventually the group came out wearing the outfits from their new single, and performed a three-song set.  I don’t recall what the first song was, but the second song was the c/w track from their previous single Demo, Nigen na which is led by Yuzu, and the last song was Magic of Butterfly, their new song.  Some thoughts of my first proper experience of seeing this group up-close, since the first time I saw them two years ago I didn’t really know anything about them, and at Yokohama I was pretty far back… 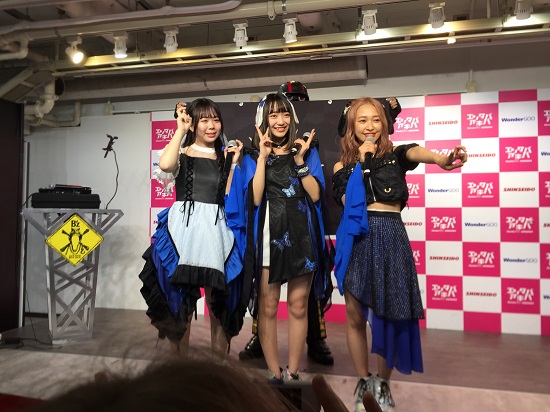 Now when I met DESURABBITS back in June, aside from Bucho, it was Yuzu who seemed to be the most interested in me, and talked to me the most.  However, this time Emi immediately zeroed in on me, and throughout the show she kept eyeing me and smiling as if she was making sure I was having a good time.  What I love about Bucho, aside from being such a cool guy, is that he leads the fans in chants, and also demonstrates the hand motions.  The guy is a great promoter, and does an excellent job encouraging everyone to get involved.  Yuzu, is just a ball of energy.  She wears a short cut top which shows off her chiseled midriff, and I think her transition to being a blonde totally works for her.  I mean it’s almost as if it transformed her.  There’s a Yuzu chant throughout Demo, Nigen na, and every time the fans do it she would go to the front of the stage as if she was ‘drinking it all in.’  It was cute.  Karin has the most adorable face, but she comes across to me as the ‘shy girl’ among the members.  She’s the one I had yet to have any sort of meaningful interaction with.  Well, at least up until that point. 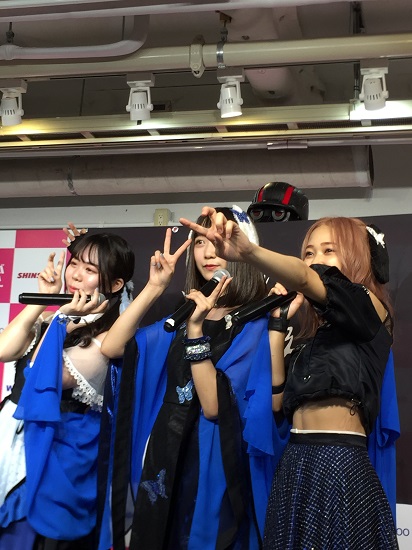 They had a photo-op portion of the event where we could all take photos.  However they stay in relatively the same spot.  So of the 20-30 pics I took, most of them look pretty much the same.  So as I went through the photos I deleted the few that came out blurry, and the ones where one (or more) of the members were making unflattering facial expressions.  But I got a few nice photos.  At the end of the show they offer a free photo to anyone seeing the group for the first time.  At one point Bucho asked if it was my first time.  Huh?  After all the time we spent talking just a month ago?  But it was Yuzu and Emi who both spoke up and said that they had seen me before, and Bucho was like “Oh yeah!”

After that it was time for buppan.  The way it was organized, they initially lined up everyone who was doing the one-ticket and two ticket options.  After all the handshake people went through, the two-ticket people went, and then they lined up people using three tickets.  It was at this time that I realized that the 2-shot checkis were in fact signed chekis.  Damn!  Had I known that might have chosen that option.  Oh well, live and learn.  By the way, it seemed like there was an even split among the girls for fan 2-shots.  And even Bucho had a few people request him.  In the meantime Bucho-san came over to talk to me, asking how my weekend was, at which point I filled him in on my job search.  He asked if I was going out drinking after the show.  (Huh, was this an invitation?)  I should’ve said yes just to see what he would say, but instead I truthfully told him I had no plans to go out drinking after the show since I needed to go to Saitama tomorrow to see Wasamin.  He told me to be careful, and that being an idol fan can be an expensive hobby.  Haha, he’s telling me? 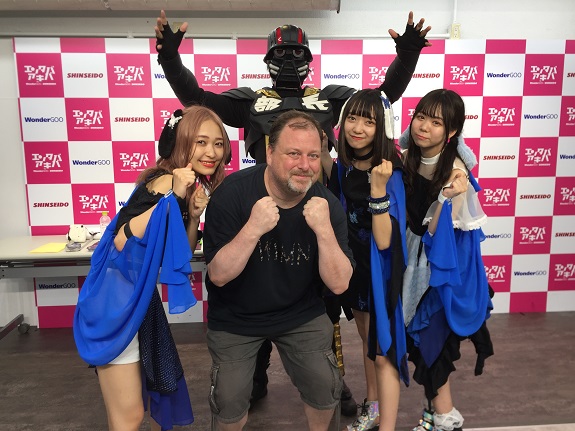 Eventually it was our lane’s turn.  I had confirmed with Bucho earlier that a shamekai was okay (everyone else was doing a cheki)  The moment I stepped on stage Emi began going on and on about my “beautiful blue eyes,” Yuzu joining in on the compliments as well.  Ahh, so THAT was probably why Emi kept staring at me.  She just seemed mesmerized by my eyes, even after the photo as I thanked her, then Yuzu. When I turned to Karin, Bucho told her to say something to me in English.  Karin got all bashful, and basically said ‘Thank You’  Meanwhile I told them about how happy I was to see them again, and when I got home after their Yokohama event I looked over their entire website, and watched all their YouTube videos.  They all seemed really excited, and Bucho once again gave me a hug.  LOL, I should really party with this guy!  After I left the stage of the fans gave me a DESURABBITS Ramen kit, which was a special bonus on some of their earlier singles. (I knew that from their website)  It was a really nice gesture, although I’m not sure.  Should I eat it?  Or just keep it? 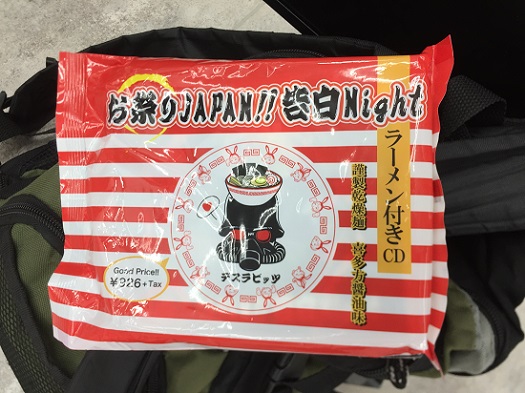 After that I left, and after a quick dinner I headed home.  While on the train I posted a Twitter update, with a couple photos from the event saying how great a time I had, and that Bucho is awesome.  A short time later Bucho-san himself liked the post, and he posted a reply…

How cool is that?  In the meantime, I would love to go to their event Monday in Kawasaki, but it conflicts with Wasamin’s event, so I will have to miss it.  They do have a few shows later this month, and a couple more Kanto mini-live events at the end of the month, so I will definitely plan to see them again soon.  Another group I am quickly growing to love.