Wasamin has probably performed at over 100 different malls across Japan in her almost eight years as a soloist, and most of those malls are conveniently located near major train stations. However, some of her performances have taken place at locations that are difficult to access unless you are coming by car. Aeon Shimotsuma in Ibaraki Prefecture comes to mind, as does Tressa Yokohama, which is where Wasamin’s event took place on Tuesday.

Wasamin has performed at Tressa at least once before, and the last time I ended up skipping the event since I didn’t want to go through the pain of having to get there. However, we are in the middle of her big promotion for the new version of her 8th single, and to be honest I didn’t really have anything else to do. Moreover, Tsunashima Station is relatively easy for me to get to via the train that stops by my house. It was just a matter of researching which bus I needed to take to get to the mall. After figuring that out, I was on my way.

I arrived at the station relatively early, and knew that my bus was outside the east exit at stop #7. I found Stop #1, and walked all the way to Stop #6, and that was it. Huh? Where was stop #7? I checked the map, and it said my stop was somewhere a block or so away from the station. Jeez, just my luck. I went the wrong way at first, but eventually doubled back and found where I needed to go, and whadd’ya know, the bus was just pulling up. It was scheduled to leave in two minutes, and it was a 12-minute ride. Why we sat at the stop until seven minutes after departure time, I have no idea. The other odd thing is that there is a Tressa Yokohama Stop on the bus line, but it is a block after you pass the mall. Meanwhile there’s a stop actually in front of the mall, but it’s called something else. Weird.

So I finally made it 45 minutes before the show. I reserved a seat, and took off to explore and grab some lunch. It’s a big mall, but it’s not because it has a ton of stores. In fact, half the mall houses car dealerships. I had never seen an indoor mall quite like it. I mean it’s an indoor mall, and it’s filled with cars from pretty much every Japanese automaker. The other half of the mall was primarily food. On the first floor there was a big supermarket, rows of specialty shops, fast food restaurants, and a food court. The 2nd floor was mainly sit-down restaurants. Despite the mall looking relatively old from the outside, the interior looked to be recently remodeled into a classic French theme, not unlike Venus Fort in Odaiba. Anyway, Wasamin would be performing outside the Shinseido and the Starbucks, just opposite the Toyota Dealership. There was a huge overhead screen looping her latest MV, and there was also a big television nearby showing the Summer Koshien tournament. The entire setup of the place was interesting. 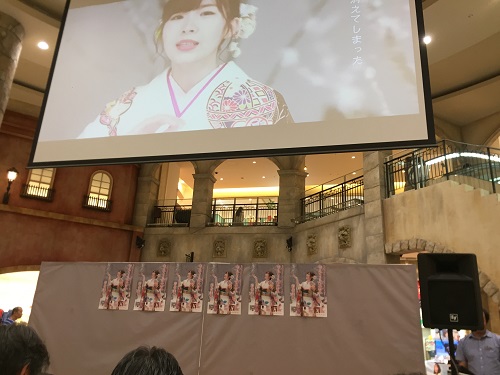 After enjoying a quick lunch at the kaitenzushi, and returned to the stage area and took my second row center seat. Shortly before the show, staff informed us that while doing Wasamin calls was okay, they requested that we mute ourselves a bit so not to annoy the nearby businesses. What that usually means is that when we cheer, we do it in a low octave, almost mocking the request. Wasamin usually gets a kick out of it too. When she took the stage she was wearing a brand new kimono, lavender with black & white print. It was really pretty, and I couldn’t wait to take a picture with her wearing it. Oh, here’s the early setlist…

I finally got to hear her sing Tonde Istanbul on this tour, yatta! And of course ‘Blue Light’ is a standard whenever she performs in Kanagawa Prefecture, for obvious reasons. During her MCs she brought up the heatwave we have been dealing with all month, and thanked everyone for braving the weather and coming out. She also spoke about her cancelled event in Kyushu on Thursday. I am pretty sure everyone was relieved Wasamin wouldn’t be flying to Miyazaki in the middle of a typhoon. Finally she brought up her new kimono, which received a rousing approval from the fans. As I mentioned, we all did a good job keeping our cheering to a dull roar, but thankfully the volume of the performance was loud enough to draw people from all over the mall. The audience was small from the outset, but grew as the show went on. Afterwards they quickly set up for buppan, and I was around 10th in line… 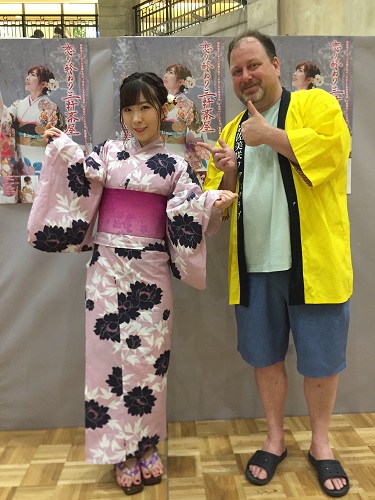 Basically showing my approval of her outfit. I mentioned that the moment she came out I knew her kimono was brand new, and thought it was really pretty. Funny story, last night I went to my local Welcia Pharmacy to pick up mosquito repellent and bite relief medication, and when I got home I checked Wasamin’s blog to find out she also went shopping at her local Welcia at around the same time. So I mentioned to her that funny coincidence, and showed her all the bug bite marks all over my legs. She was familiar with all the products I bought since they are evidently the most commonly used for mosquitoes throughout Japan. But she was surprised to see my right leg has close to 20 bites on it. With that I excused myself and went to look for a nice place to hang out before the second event.

I wasn’t hungry, but I was really thirsty. I noticed that pizza counter in the food court offered a “Jumbo” soda for only 150 yen, so I got a big Coca-cola, only to find that they filled the cup with so much ice there was barely any soda in it. I ended up going to the mall conbini and picking up more drinks, which I kept refilling into my ice-filled jumbo cup, LOL. Since the mall was mainly food and cars, I couldn’t find too much to do, so I eventually went back to the stage, grabbed a first row seat on the right, and vegged out for close to an hour until the second event began. Once again we were to not to overdo the calls, and with that Wasamin came out. Here is the late setlist…

They forgot to turn on Wasamin’s mic, which she didn’t figure out until she attempted to start the first verse of Hatsuzake and nothing came out, LOL. Niji wo Watatte was an interesting choice given our admonishment not to be too loud. In fact, Wasamin even made note of it when she introduced the song, saying she understood that we had to keep the noise at a certain level, but let’s have fun with the “Wasamin” calls anyway. Once again, during the MC she talked about the heat, and her new kimono. Oh, and somehow she accidentally turned off her mic on the last chorus of ‘Sangenjaya,’ oops! I decided to take a short break when buppan started, coming back around 10-minutes later. The line was still fairly long, but it cycled through quickly…

Ahh, the “Gets” pose. Wasamin immediately started laughing. “Why GETS???” I dunno Misaki-chan, it just came to me. I guess I like Dandy Sakano. “But why GETS?” I first saw it when I saw Matsuura Aya’s soccer movie, and Dandy Sakano was in it. “Ayaya was in a soccer movie?” Yes! (I couldn’t remember the movie’s title at the time, it’s “VICTORY: Futto Girls no Seishun”) Dandy Sakano was a coach who taught Becky to “GETS the ball.” Meanwhile both Wasamin and her manager were laughing. But my time was up. I told her I would see her tomorrow. I will give her the name of the movie when I see her in Kamisato.

I stuck around until the end of the event. I wasn’t sure where the bus stop was, so I figured I would just walk with everyone else. It was perfect timing, as I was able to catch an express train to Hiyoshi, and then a direct train all the way home. I even managed to grab a short nap on the ride. Tomorrow is another mall that isn’t near a train station. Not to mention Kamisato is a long ride north, all the way to the Gunma Prefecture border. there is a shuttle from the station to the mall, but there is a 2+ hour void in the late morning when no buses run. So I will have to either arrive extra early to catch the shuttle, or find another way to get there. I figure as long as I make the 9:35 express train from Akabane I will be good to go. So that’s my plan for tomorrow. Hopefully like today I will avoid the scattered showers lingering in the area.