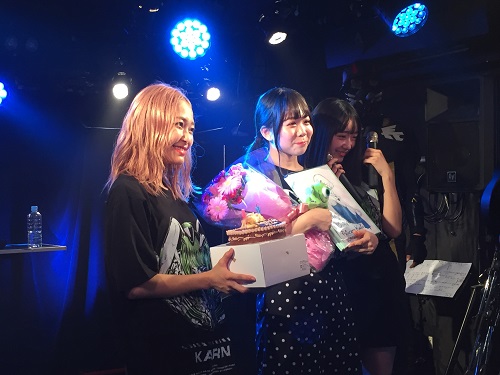 After catching DESURABBITS Mini-Live in Akihabara last weekend, my enthusiasm for this group had risen even higher.  I began scouring their upcoming schedule to find other shows and events I could attend.  They have a bunch of free mini-live events leading up to their 10th single release in September, including August 31st in Koenji.  Wasamin also has a mini-live scheduled for the 31st, but I checked the time, and the shows do not overlap, so technically I can attend both…

Additionally, DESURABBITS have a couple of full concerts on their schedule.  There’s a one-man live in Shimo-Kitazawa on September 14th, which I am seriously considering.  Then there was Karin’s birthday live.  I went back and forth on whether I wanted to go.  It conflicted with Minyo Girls’ one-man live, which I hadn’t yet purchased a ticket for, plus it was on the high-end of what I am usually willing to spend on a live show.  However, a few days ago I noticed someone with a DESURABBITS twitter handle “liking” my recent Twitter posts.  Moreover, they responded to my DESURABBITS mini-live review tweet with a “Thank You” and a few hearts.  I took a closer look, and it was Karin.

My first thought was Wow, she is the one member I haven’t really connected with, and here she is responding to my tweets.  Did she read my post where I said I thought she was shy?  Was this her attempt to connect with me since I mentioned all the other members already had on some level?  Whatever her motivation, the end result was me feeling I needed to reciprocate her efforts, and what better way than to attend her birthday show.  I checked the group’s official site, and it said it was already past the reservation deadline.  Bummer!  At the same time, the reservation system was still live.  Well what the heck, I’ll attempt to submit a reservation and see what happens.  I received a confirmation email almost immediately.  I was good to go! (I think)

Since the show started at noon, I headed out around 10:15 a.m.  I had been to Shimo-Kitazawa a few times before.  It is one of Tokyo’s more bohemian neighborhoods.  The area is filled with music clubs and small boutiques.  However, the music scene is more rock and jazz focused, rather than idols.  I have seen Chaki (former SDN48) there a few times, as well as a group called Ketchup Mania, who I was into when I first got into J-music a long time ago.  It is also the home of Shimokita FM, which does feature idols quite frequently.  They have been in the process of completely remodeling the train station for a while now, and when I arrived I was initially confused on which direction to go since everything looked completely different.  But once I got my bearings straight it was just a 4-minute walk to the venue.

LIVEHOLIC is on the 5th floor of a small building across from Village Vanguard.  It also houses a couple restaurants, and a rock-themed bar.  It was around 10-minutes before doors, and people were milling around outside.  Eventually it was 11:15 and time for doors to open, but I didn’t notice anyone going upstairs.  So I kept waiting.  11:15 turned to 11:30.  What was going on?  Eventually I decided the heck with it and headed up to the 5th floor.  There I found a queue wrapping around the stairwell.  But it was strange since I never saw anyone enter, aside from a couple girls.  By the way, the girl I was behind in the queue was definitely an idol.  I have no idea who she was, but she was totally adorable.  Petite, with the tiniest shorts on.  She got in for free too. 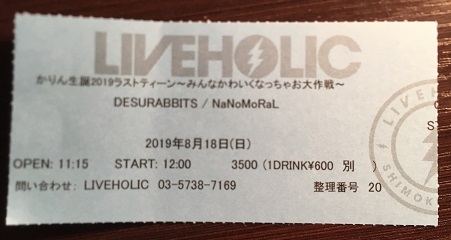 I entered the venue, and there was hardly anyone inside.  It turned out most everyone was at the buppan tables which were in the bar downstairs.  I decided I would deal with that later, and grabbed a spot on the far left railing, just one-off the stage.  It was a nice view, with a couple other advantages I will describe shortly.  It was almost showtime, and the fans were scrambling to put up birthday decor at the last minute.  The fans of the opening act were allowed access in the front.  Karin-chan took the stage to start the show and thank everyone for coming, noting that her birthday is actually on Monday, so this was her last day of being 18.  She then introduced the opening act, a group I was sorta familiar with… 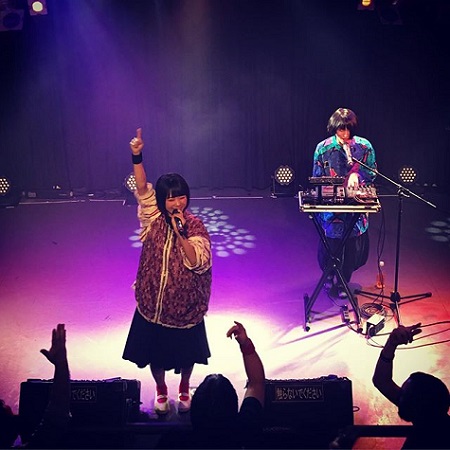 The moment they hit the stage I immediately remembered them as the group my friend Derek (48Talk, Necronomidol assistant) had been pushing recently.  The duo consists of Miku as the main singer, and Paseli-chan as the producer, keyboardist.  They are another group whose sound is more rock than idol, and they are a lot of fun to watch.  Miku’s huge grin and energy are infectious, and the guy is really talented, both as a musician and a singer.  To be honest they aren’t the type of group I will end up following, and personally I felt they could work on their singing a bit, but they put on a nice show.  By the way, I forgot to mention that Karin-chan stood right next to me for the entire set.  It was almost like she was my date! (LOL) Yeah, it turned out the spot I chose was right next to where the girls rested, or watched the show from.  So I chose a nice spot, although I have been doing this long enough that I knew not to try and engage the members since this was technically their “offstage.”

It took a few minutes to change out the equipment before it was time for the main act.  In the meantime the fans of NaNoMoRaL retreated to the back, and fans began calling for the Karin-supporters to make their way to the front, especially the girls.  (There were A LOT of female fans on the audience!) I backed up a couple feet to give the Karin-fans room to move in, which ended up being a big mistake since the one tall guy among them took position right in front of me, effectively blocking my view of almost half the stage.  Oh well, I was still close, and I could see 2/3 of the stage just fine.

With Bucho positioned behind his DJ equipment, Karin took the stage first, followed by Yuzu and Emi.  Oh, and after the show they passed around a printout of the setlist, which I took a photo of…

So it was mainly a mix of their singles, and a few b-sides from their 2nd album.  The middle of the show was a Karin solo segment, first featuring her on guitar, then a song she composed herself.  Karin is definitely a beginner when it comes to playing the guitar, but she gave it the ‘ole college try!’  As for her self-composed song, it was really cute. 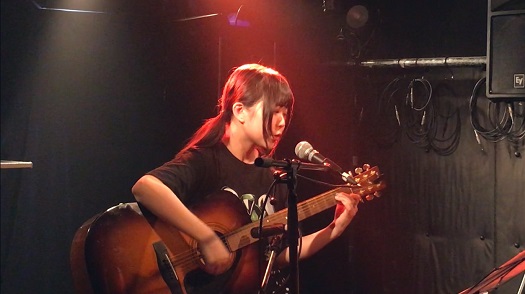 By the way, during the show a few interesting things happened…

-While singing the lead on ‘Nana-Kajo,” Emi no longer hits that really high note.  Instead she stylizes the verse differently.  Is it possible now that she’s older she cannot hit that note anymore?  Not sure.

-Bucho-san spends a lot of time on his phone during the show.  I think he is messaging the staff for the most part, but I also saw him typing notes that he flashed to the girls.  Speaking of that…

-At one point he was messaging the group’s assistant.  I know this because she was standing right next to me, trying and failing to light the candles on Karin’s birthday cake.  I could tell she was really frustrated too.  The trouble was she was attempting to light them directly under the air-conditioner which was blowing them out, LOL.  And at one point I’m sure Bucho communicated the problem to the girls onstage because they were all laughing.  She somehow got the candles lit eventually. 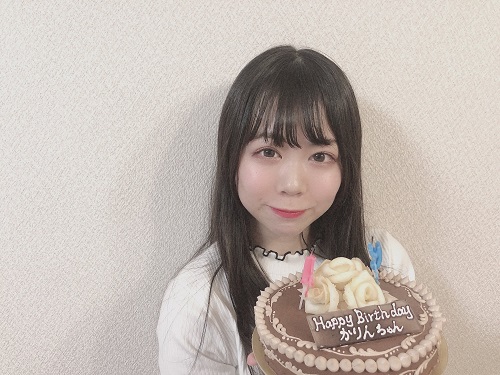 -I mentioned the tall guy in front of me.  Like I said he was blocking my view of part of the stage, which was okay.  But he kept holding up the flag we were given, which was blocking the rest of my view.  Eventually I tapped him on the shoulder and asked him to put the flag down, which he did.  It turned out he was head of the birthday committee, and brought the flowers and scrapbook up to the stage during the birthday celebration. 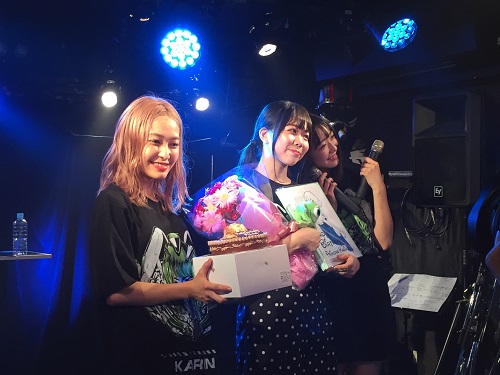 The fans all knelt down during every MC, which by the way is murder on my knees.  I tried to kneel down like everyone else as much as I could, but sometimes I just crouched down since I was on the railing and wasn’t really blocking anyone.  I think next time I might stand further back to spare my knees. 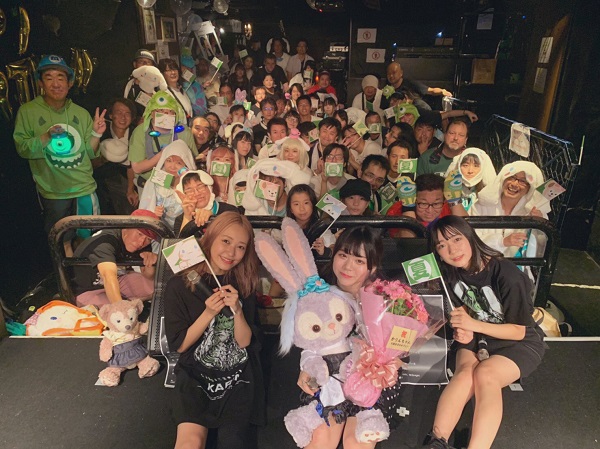 I’m on the right, and my knees are on fire

The show ended with no encore, and most everyone retreated downstairs to the sales tables.  I hung back to hopefully snap a few photos of the birthday decorations, and met up with another one of the foreign fans in the audience.  It turned out I knew her from online forums, and since she is a bit of a DESURABBITS expert I quizzed her a bit on the group’s buppan system, clearing up the confusion I had over how to get tickets. (It turns out only certain items are eligible) 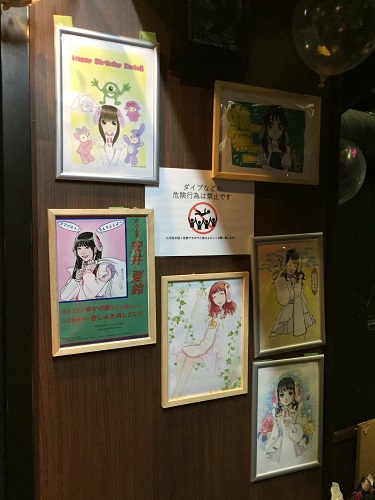 Eventually I went downstairs and queued up.  I knew I wanted to purchase their first album since it has most of my favorite songs.  I also learned that the ramen packages they sell also have CDs inside them, and are eligible for buppan tickets, so I will put those on my list of things I want to buy in the future. 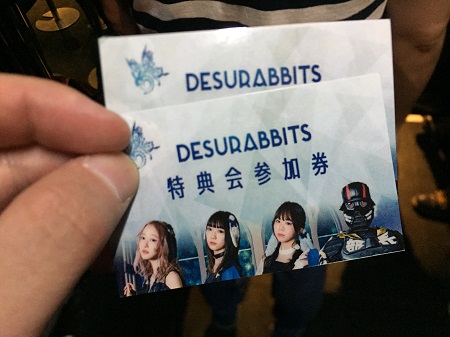 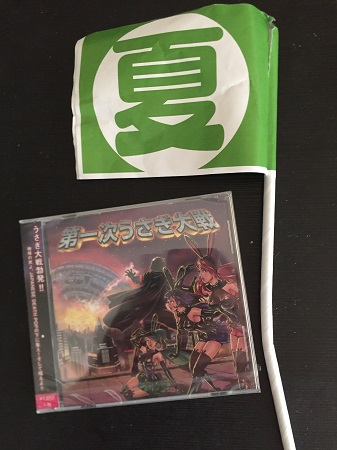 My handshake tickets, DESURABBITS 1st album, and the “Natsu” flag the fans passed out

I went back upstairs and queued up for buppan, first getting into the wrong line.  But after talking with the group’s assistant, she directed me to the queue I needed to be in.  I had two tickets, which were good for one signed 2-shot cheki.  Normally I would go to Bucho, since he is my group oshi, but it was Karin’s birthday, and her tweet to me was a big reason why I was there.  So despite her line being very long, I decided to brave it.  I wasn’t in a big hurry anyway.  It was a good choice, since Karin-chan seemed happy to see me.  This was the pose she chose…

Of course I wished her a happy birthday, and I thanked her for responding to my tweet.  She admitted that it was all she knew how to write in English.  That’s okay, I basically said that I was so excited after last weekend that I wanted to write about their show on my blog, and was happy with her and Bucho’s positive response.  There’s an alarm that goes off when your time is up, and their fans are very good about leaving right after it rings.  So I again wished her a happy birthday, gathered my bag, and took off.

I had errands to run, so I went directly back to the station, going to Shibuya first, and then to Shinjuku, before finally heading home.  It turned out later that day DESURABBITS did an impromptu free live outside of Shimo-Kitazawa Station, which I unfortunately missed out on.  Although since I had other plans I don’t know if I would’ve stuck around even if I had known.  By the way, the group posted yesterday that they will be holding those station lives periodically, and to watch their Twitter account and look for the hashtag #dontmissDR .  So far they’ve been holding them around their other events, so hopefully I will be able to catch some of them.

And I will definitely be catching more of their events, especially since they will be frequently appearing around Tokyo over the next few weeks.