I have always contended that in my history of being a J-pop fan, I have generally been very loyal to the idols I have taken to.  Case in point, Wasamin has been my kami-oshimen for 10 years.  Moreover, since I started going to Japan, and especially over the last four years, I have developed a personal stable of idols and idol groups to support that’s been fairly consistent.  That said, sometimes I go through cycles with regards to the intensity of my support of specific idols and groups.  For example, I have remained a huge fan of Aoba Hinari from FESTIVE ever since I first saw her perform in San Francisco four years ago.  However, I haven’t met with her in almost a year and a half.  There are various reasons for this, none of which have anything to do with her specifically.  But it is what it is.  I just haven’t gone to a FESTIVE show in quite a while.

It’s a similar situation with Yuki Himeri.  The last time I saw her was eight months ago, and before that it had been over a year since I met with her.  Although in my defense Himeri is the epitome of a “vagabond idol.”  Since she quit being a member of Alice Project, she has burned through three different idol groups over the last 2-3 years.  And to be honest I have never truly gotten into the groups she was in.  Well, I kinda liked No Plan, but I didn’t figure that out until shortly before she left.  I never really gave Setsuna Sonic a chance, and I was not a fan of Disdol.  The point is that it was tough for me to get into any sort of rhythm with Himeri since her idol career has been so erratic.  But despite that I have always liked her, and have never stopped paying attention even if I wasn’t going to her shows and events.

So perhaps it was fate when I happened to notice that Himeri was holding a birthday live at Otsuka Hearts.  Actually, what I first noticed was a series of tweets she made where she seemed to be calling out her fans and giving them an ultimatum.  Similar to Wasamin, Himeri is kinda funny that way.  They are both sweet and congenial, but sometimes show a sense of bravado on social media.  Admittedly Himeri’s series of tweets hit home, since I do consider myself her fan.  And her tweets were basically saying that if I was really her fan that I would come to her live, and missing it was tantamount to abandoning her.  It was a bit dramatic, I know.  I’m guessing this may have been due to a low initial reservation count.  Personally I almost never reserve until the last possible moment.  But after going back and forth on how much I wanted to go, I finally relented and made a reservation.  After all, I DO want to celebrate her birthday with her, and Otsuka Hearts is close to where I live… 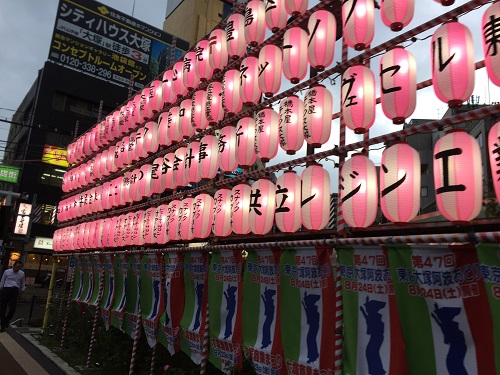 This was not a solo live.  There were four other acts on the schedule.  Aside from COLOR’z, I had never heard of any of them.  Himeri, and her partner Murasaki Nasuko (Himeri’s former group mate in Setsuna Sonic) were holding a one-hour pre-show buppan event, which meant getting the full Himeri experience meant being there for the entire show.  Since I had no other plans that day I decided what the heck, and made my way to Otsuka extra early, but not before stopping at Beer Titans for a quick pint.  I was still able to make it to the venue with 20 minutes to spare, purchase a buppan ticket, and take a cheki with Himeri. 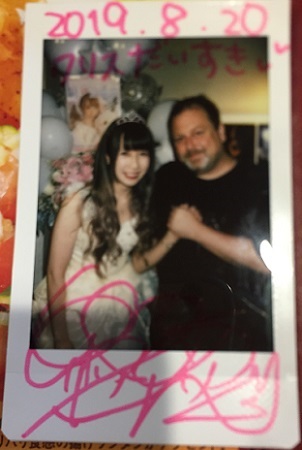 Himeri looked adorable in her party dress and tiara. (She is known as Princess Himeri after all)  And I am so happy she has continued to dye her hair blonde as I think it makes her look stunning.  Admittedly, I have always thought of Himeri as a “nerd idol,” and she is.  This is especially evident when you get to know her.  But her blonde hair exponentially raises her sex appeal.  By the way, we spent our time catching up, and I kinda called her out on the tweets she made, saying I felt I had to come as a result of her messages.  She kinda acted like she didn’t know what I meant though, LOL.

I decided to grab my requisite drink, and hung out for a few minutes by the ashtrays.  In the meantime some random dude wearing a fedora smiled at me and nodded.  Did I know this guy from somewhere?  It was getting close to showtime, so I headed into the stage area, grabbing a spot fairly close to the stage.  Eventually the lights came down, and whaddya’ know.  The guy in the Fedora?  He was the opening act!

The birthday banners on stage 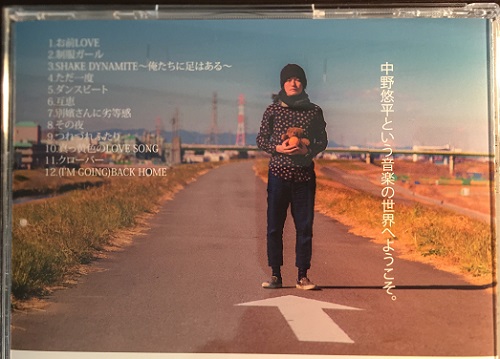 The back of Youhei’s solo CD

At first I thought maybe he was just the opening MC, but it turns out he is an accomplished musician and songwriter who’s been in the business for 20 years, has appeared at Summer Sonic, and has written songs for the idol group COLOR’z.  He eventually addressed me personally (as the only foreigner in the room, of course) and beckoned me to come down front and center.  His main song, SHAKE DYNAMITE, was from his debut solo CD, which contsined heavy audience participation which he taught us before singing it.  His live was a lot of fun, and in many ways reminded me of Billyken, a duo Wasamin occasionally performs with.

After that the first of three female artists, who on the schedule was listed as “Guest.”  I’m not sure what her name actually was, or if “Guest” was what her act was called or what, but it seemed like she was very new to performing.  In fact, this may have been her debut?  She spoke quite fast during the MCs, and stated multiple times how nervous she was.  However, she also said she was a personal friend of Himeri.  Ultimately, she was a competent singer, and I’m glad I stuck around since Himeri eventually joined her on stage.  But the moment her set ended I took off for the lobby.  I had no intention of watching the show for two hours straight….

I grabbed a second drink, and headed to the smoking area, where Youhei (the opening act) was hanging out.  He immediately struck up a conversation with me.  And to make a long story short I ended up hanging out by the bar chatting for an hour, missing the next two group’s performances entirely.  So unfortunately I have no review whatsoever for COLOR’z, or Kamikaze Sensation.  In the meantime, Youhei’s partner, or manager?  I’m not sure.  But he kept buying me drinks.  So when it was time for Himeri and Nasuko’s set to begin I was fairly inebriated.  But I was ready to have a good time. 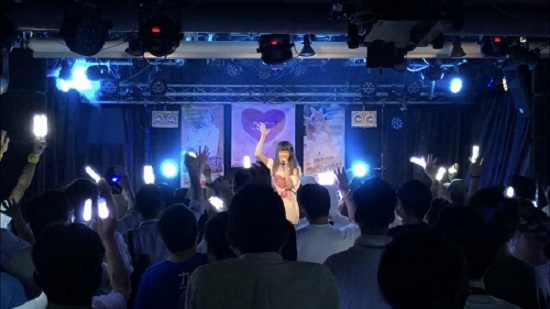 I maneuvered my way close to the stage just as it was time for the show to begin.  To be honest, since I have paid so little attention to Himeri’s work as an idol recently I have no idea what their songs were.  My guess is they were Setsuna Sonic songs?  All I know is it was kind of an eclectic mix of rock and electronic music.  The crowd was in high tension, and the room was filled with white and light purple glowsticks. (they were passing them out before the show)  Youhei eventually joined me on the floor.  It was a great time.  At the moment I thought “I am so glad I decided to come!”  There was a birthday celebration at the end, and Nasuko had written Himeri a nice birthday letter which she read on stage. 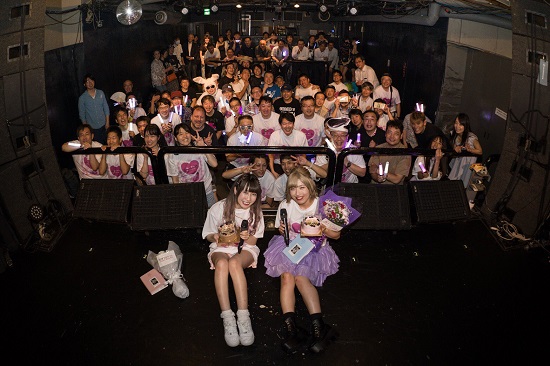 From Himeri’s Twitter.  I am close to the front, just left of center

After the show they immediately set up for buppan, with Himeri on the far right.  Yuuhei also had a buppan table, which had no queue whatsoever.  I was around sixth in line for Himeri.  I initially planned on just seeing her once, but after my first cheki I decided I would see her again after the show. 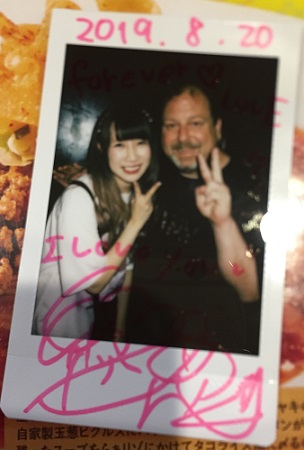 I went on and on about how much I enjoyed her performance, and the songs.  I went on to tell her about how I had made friends with Youhei.  I’m sure I was more animated than usual since I had a bit of whiskey in me, but it was all good.  Himeri loves being touchy-feely, and super-genki, so I was merely meeting her usual energy.

In the meantime I headed back to the bar where Youhei had moved his buppan.  Eventually he asked if I would purchase one of his CDs.  I hung out with the guy half the night, I was given free drinks.  It was the least I could do, right?  After I bought the CD I asked him if I get to take a cheki.  He said no.  I was in a negotiating mood though, so I basically dictated that we would take a selfie together, which he agreed to.

We actually took two selfies, but this is the one I like better.  We exchanged social media contacts, and I said my goodbyes.  I walked over to Taiyou no Tomato Men for a late dinner, my go-to spot when I see shows in Otsuka.

Suffice it to say that I am very happy that I decided to attend this show.  I got to re-connect with Himeri, and see what kind of music she is performing these days.  I made a new friend in Youhei.  It was a great night.  By the way, they were billing this event as Himeri’s Birthday/Farewell performance.  I’m not sure what “farewell” means specifically.  I didn’t get the impression she was retiring from being an idol.  There was no sentimental speech, or anything like that.  Perhaps she is leaving Bell Agency?  I don’t know, but I am reasonably confident this isn’t the last we will hear from her.  Also, I’m not sure performing as a duet with Nasuko was a one-off, or if they will continue as a group.  But I thought they worked very well together, and would certainly see them again.