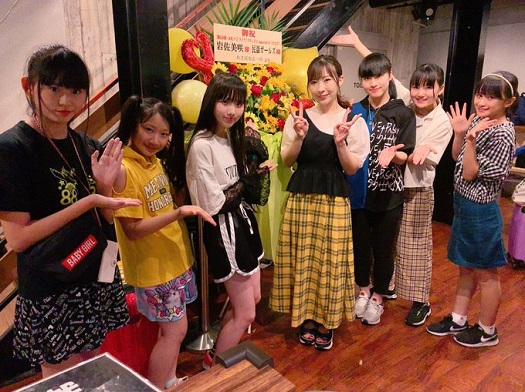 Minyo Girls have been doing these “Battle Concerts” for a few months now, which are sponsored by Utanavi (The show Wasamin co-hosts) In reality, they are not so much a battle as they are a 2-man live concert. It was announced quite a while ago that Wasamin’s first appearance in the series would take place in late-August, and I would’ve purchased a ticket quite a while ago, except I wasn’t sure if I would be able to go. Once I was certain I could make the show, it was a matter of getting a ticket, which is where things got slightly complicated…

Minyo Girls regularly sell tickets to their future concerts at many of their events, the only exception being their new release mini-live appearances. The advantage of buying a ticket directly from them is 1) you get credit on your point card, 2) you get two handshake/2-shot tickets for each ticket purchased, and 3) you get priority entry. Wasamin, on the other hand, wasn’t nearly as aggressive in hand-selling tickets for the show. Sure, she promoted it during MCs, but that was about it. The majority of Wasamin fans bought their tickets through the various ticket websites. For me, it should’ve been easy to get a priority ticket from Minyo Girls, but I had missed all of their recent events where the tickets were on-sale. Ultimately I bought my ticket through Lawson. 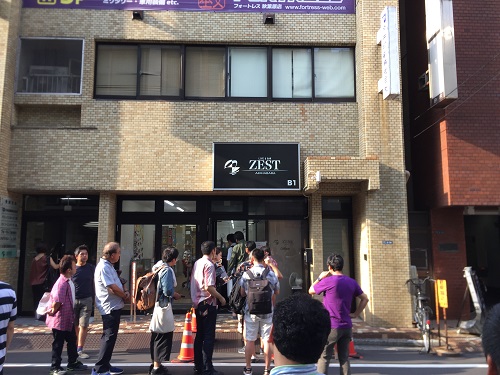 On the day of the show I wasn’t too concerned about arriving early since I knew I would be among the last to get in. I got to Akihabara Zest just a few minutes before doors, and sure enough the queue was top-heavy with Minyo Girls fans, while most of the Wasamin fans were standing across the street waiting for their number to be called. By the way, I have been to Zest a couple times before. It is fairly close to the AKB48 Theater, on the other side of Chuo Dori (hehe) a block behind the Belle Salle Building, and next to another notable Akiba live house, Twin Box Akihabara. It’s a relatively small venue, and I was concerned with how they were going to fit everyone inside. However, once I got in I saw there was plenty of room. In fact if I wanted to I could’ve stood aroud the middle of the room. However, the back of the venue was on an incline, so you have an unobstructed view. With that in mind I went out to the lobby a few minutes before the show to purchase 2-shot tickets and get my prerequisite cocktail. I returned to find my spot still empty, so I was good to go. I was wearing my Minyo Girls T-shirt and Wasamin Happi since I support both of them. Minori did the kage-ana, and off we go…

Minyo Girls took the stage as a 6-nin unit. Missing were Matsuri, Rio, and Yuua. Matsuri and Rio miss a lot of the Tokyo shows since they live far away (Matsuri lives in Hokkaido, Rio in Osaka. The rest of the members are from Kanto) I’m not sure what’s going on with Yuua. It seems like she has been missing a lot of the group’s promotional events. Her absence is notable since she is widely considered to be co-center with Miyabi. I don’t keep track of their setlist, but the performed for almost an hour, and were mainly doing their most intense, high-energy songs, which is something I always enjoy. On the other hand, their set was marred with technical issues, most of which I believe were the fault of the mixing board operator. For one, he had the music much too loud in comparison with the girls’ microphones. He seemed to be fiddling with the mix throughout the show too. The other problem was with the girls’ microphones. I’m not sure if he was turning them off, or if the mics were malfunctioning, but throughout the show certain members would begin talking or singing and the mic would be off. The girls were switching mics mid-song, and during the one song Ramu actually sings in her microphone was significantly hotter than everyone else. Since I was right next to the booth I kept giving the board-op the ‘stink-eye,’ LOL.

All that said, I think the girls themselves did a great job. Their choreography is spot-on, and they chose a great setlist to promote themselves to the Wasamin fans. They finished the set with their new single ‘Happy Days,’ and they preface the song with a lesson of how to do the hand motions in the chorus. This time it was Ramukyun doing the instructions, which was a total hoot. She has that baby-girl delivery, and she always seems like she is slightly confused. But it’s completely adorable, and at the end of the day she clearly communicated the instructions, and seemed like she was having a great time doing the MC. Ya know, I think she gets how endearing her shtick is to the audience.

And with that it was Wasa-time! Many of the Minyo Girls fans retreated to the back (actually, many of them left for the lobby) allowing the Wasamin fans to come closer, which meant the ticket issue I described in the beginning kinda worked itself out.

Wasamin took the stage almost immediately after the Mingaru set ended, wearing her light, floral-patterned kimono. I was concerned about the board guy messing with Wasamin’s set, but her music/vocal mix sounded perfect. I guess it’s easier with one microphone, as opposed to six. Let me begin with the setlist…

Wasamin seemed to be in a really goofy mood, as she kept laughing at all of our ‘call and response’ gags we usually do. In fact at one point she asked who among us had alcoholic beverages from the bar. Seriously though, the main crux of her MC was how she was worried about the setlist, as she didn’t want to risk boring the Minyo Girls fans with an hour of her Enka stuff, which is why most of the songs in the middle of the setlist are some of her most fun. She got all four of her ‘Wasamin call’ songs in, which she obviously gets off on.

By the way, sometime around the first MC all of the Minyo Girls came into the room to watch the show, giggling and smiling at me as they passed. I let them all go directly in front of me to watch, but then wondered if it would’ve been better to let them stand on the incline, since they are all shorter than most of the fans. But they seemed to be having a good time. At one point a few more people left, and the crowd shifted forward, leaving a big space. Miyabi then turned to me and asked if I wanted to go down to the floor, which I did. I just love that Miyabi was thinking of me. She’s very young, but she’s very thoughtful that way. I saw that when I read the letter she wrote me, and I got another example if it at their event today (which I will write about later) 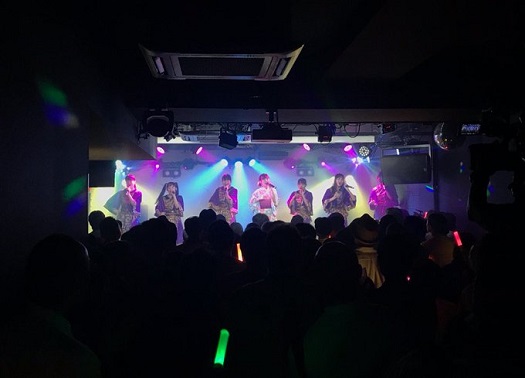 Wasamin said that Sangenjaya would be the last song, but then admitted she lied and called for Minyo Girls to come onstage so they could perform a song together. I was wondering what they would choose to sing since there are a couple songs they have both performed (Valentine Kiss, Moshuu Omimai Moshiagemasu) Ultimately they sang Wasamin’s version of KFC, which makes sense. The Mingaru members, especially Minori seemed to be thrilled to be performing with Wasamin. Minori began tearing up at one point. 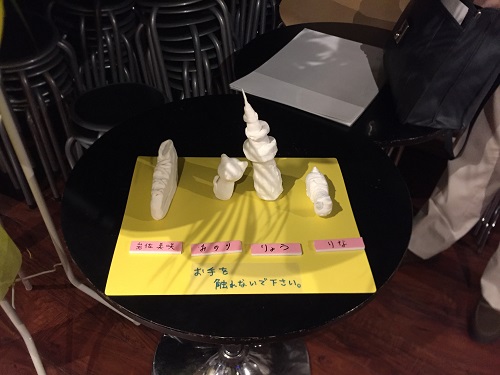 And here’s the show!

Management told everyone to clear the stage area while they set up for buppan. I retreated outside where it was less crowded. I had already taken photos of the flowers and the clay models the girls made on YouTube earlier in the week. However, when I returned the line to see Wasamin was huge, almost extending out of the club. I had also made a slight tactical error. Since I didn’t have too much cash in my wallet I decided just to do buppan with Wasamin, and bought two tickets for a 2-shot. However, I learned later that 2-shots only cost one ticket, which meant I would have to brave her line twice. I should’ve instead gotten one ticket for Wasamin and one for Miyabi. But oh well. Nothing wrong with two Wasamin visits. I finally made it to the front of the line, and suggested the KFC pose… 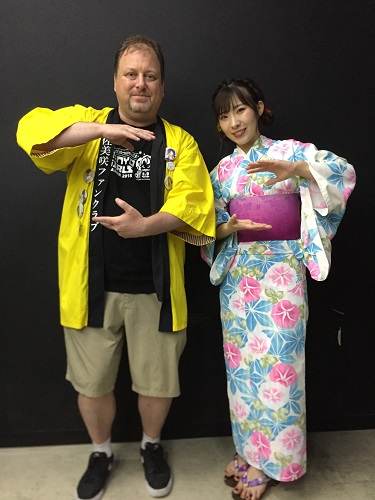 Wasamin immediately exclaimed that she noticed me standing all the way in the back. I told her that I was back there watching the show together with Minyo Girls, and that the raised step made it easy to see. Since the line was long Shinohara-san (Wasa-manager) was moving us through quickly, so Wasamin asked if she would see me on Sunday. I said yes, but that I also had one more ticket. I almost forgot my bag as I left, turning around to retrieve it. I then immediately re-queued.

The queue was somewhat shorter the second time around. Miyabi’s mother came over and talked to me for a couple minutes, and once inside both Rinacchi and Ramukyun were smiling and waving to me. I was at a loss for what pose to suggest, and was trying to suggest a different ‘KFC’ pose, but Wasamin should I was doing something else and immediately suggested this… 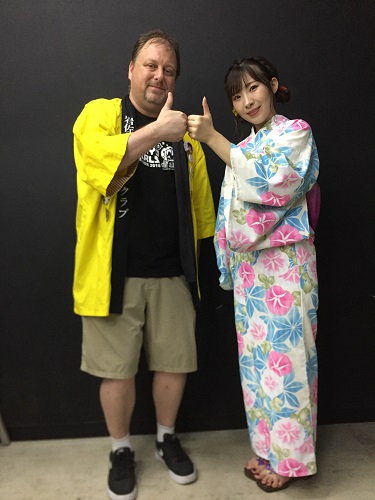 Beer mug? Thumbs up? Not sure, but whatever. It’s cute. I told Wasamin that I really loved the setlist, and that I always like when she sings ‘Hidarikiki.’ She replied, “I did the setlist myself! Did you know that?” I replied yes, because you mentioned it during the MC. She was like “Ahh, you understood!” Yep, and with that I told her I would see her on Sunday. I left the club, and was on the hunt for dinner. Despite the show beginning fairly early, it was almost 8 p.m. 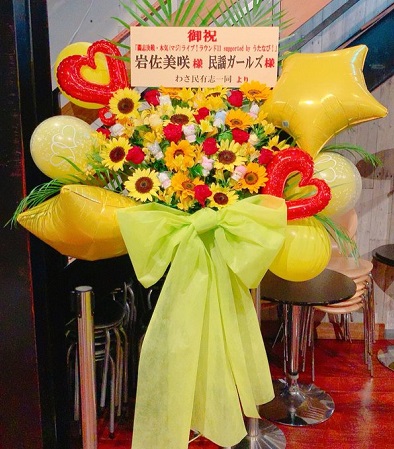 It’s interesting, but not totally surprising that Wasamin arranged the setlist herself. We learned earlier this year that Ishikawa-san (wasamin’s previous manager) has historically been the brains behind Wasamin’s bigger setlists. But she isn’t managing Wasamin anymore, and this was the first long show she has performed sine Shinohara-san took over. It will be interesting to see if there is noticeable change to her setlists going forward. Anyway, after dinner I headed straight home since I needed to get out relatively early the next day. Both Wasamin and Minyo Girls were performing at the Sancha Latin Festival in Sangenjaya. Yep, outside on a hot Tokyo summer day. Good times!