Skip to content
There wasn’t much time to relax since the previous evening’s festivities, as I planned on heading out relatively early to again see Wasamin and Minyo Girls, this time at a local festival in Sangenjaya.  I wasn’t sure how big, or how crowded the event would be.  According to the festival website, 30,000 visitors were estimated to attend, but I think that included both days, and the entire parade route. (Yes, the event also held a parade through the neighborhood)  I arrived a good 45-minutes before Minyo Girls were set to perform.  Wasamin would sing right after… 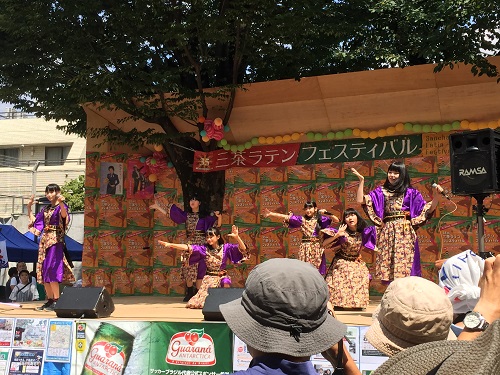 Being that I had been to Sangenjaya quite a few times over the past couple months for Wasamin events, I am fairly familiar with the neighborhood.  As I walked down the street I was waiting to find a huge open space.  But to my surprise I came across a small, semi-roofed park with about a dozen booths, a big stage, and a bunch of picnic tables filling the center.  30,000?  There were less than 1,000 people there!  Being this was the ‘Latin’ festival, I was disappointed that there was ultimately just one booth serving Latin-inspired food.  The rest of the booths were peddling standard Japanese festival grub; meat skewers, yakisoba, kakigori, kebab, motsu, fried potatoes, and plenty of alcohol.  There was a Wasamin booth set up right next to the stage, but I had no idea where Minyo Girls’ sales booth was hiding.  I’d figure it out later.  Since I was early, and it was lunch time, I grabbed a bowl of motsu stew and a beer.  I love motsu, but it probably wasn’t the best choice since it was quite hot out.  Not to mention all the tables were taken (surprise surprise!) so I had no place to sit.  I quickly finished my soup, and then roamed around the event until it got closer to showtime. 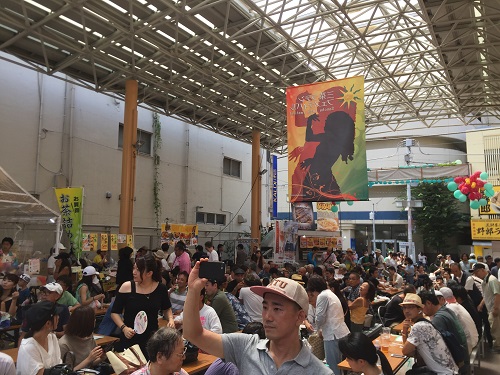 Many of the Wasamin and Mingaru fans had already staked out all the picnic tables near the stage.  The rest of us had to find random places to stand in the aisles, which caused problems with keeping the areas clear for people who wanted to enjoy the rest of the event.  I found what I thought was a decent spot, but I kept getting smashed into by people, one person causing me to spill 1/4 of my beer on my shirt.  Jerk!  I moved to a different spot, luckily finding a heavy-duty cold fan which kept me completely cool for the rest of the show.  The first act was some sort of martial arts exhibition, which I barely paid attention to.  They were immediately follow by Minyo Girls…
Minyo Girls 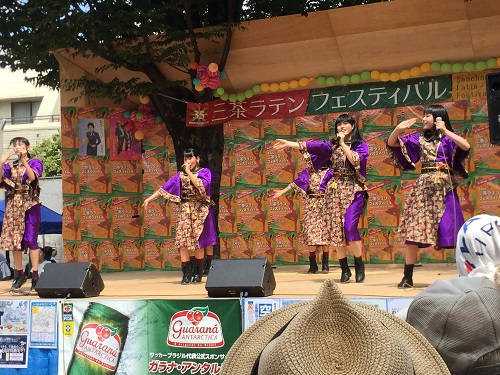 Once again, Mingaru performed as a 6-nin group, only this time Yuua was there. (Yayy!)  I had been worried about Yuua since she has been missing quite a few events lately.  However, it was Ramukyun who was not in the cast (Boo!)  While most of the fans were in the shade, the stage was completely exposed to the hot sun, which I’m sure was uncomfortable for the members.  But it was nice to see Miyabi and Yuua performing as dual-center again, which is something I haven’t seen for at least a couple months.

Yuua
One interesting thing happened at the show.  Minyo Girls have recently started attracting some younger fans.  When I say younger, I mean guys in their 20’s since they were originally being promoted to the Enka crowd, and developed an older fanbase.  Anyway, some of these younger guys have begun mixing in wotagei and the intense “Tiger Fire” style chants and mixes during Mingaru’s shows.  It seems to me like these guys save their most intense calling for shows in public spaces and events like this.  I have seen on two previous occasions where security has told them to calm down, and on this day they were being so loud and intrusive that security had to come over and tell them to stop.  Look, I have no problem with fans doing calls, cheering, mixing, and whatnot.  But sometimes you need to read the atmosphere.  And in a small and quaint festival like this where not everyone is paying attention to the entertainment perhaps doing intense calls like that is not the best idea. 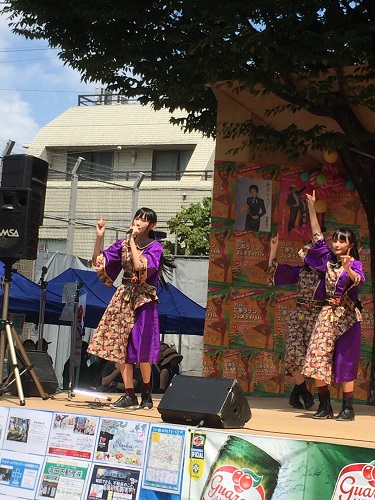 Miyabi (and Ryo)
Unlike Saturday, the setlist contained more of Minyo Girls’ traditional sounding songs as opposed to their more rock and pop selections.  This would be an example of their staff properly reading the atmosphere.  In a festival like this it is probably best to be more cultural than idol.  It’s also a better route to show off Miyabi and Yuua’s vocals.  Of course they did perform their latest single, which is very J-pop sounding.  Ultimately they did a 30-minute set with around six songs.  Oh, and at the end Yutori announced that she will be collaborating on some wrestling event with Antonio Inoki.  The idea of tiny Yutori and Inoki working together already has me laughing!
Iwasa Misaki
Since some of the Mingaru fans left, I was able to move a bit closer to the stage, but still stay in the shade, and within the line of fire of that heavy-duty fan.  There was an MC who introduced each act, and before Wasamin came on the MC announced that for her set there was to be no photography.  However I did see a few people taking photos, and staff did nothing about it.  Wasamin was wearing that black yukata she wore a couple times during her release promotion week.  I would think a dark outfit like that would be the last thing she’d want to wear in the hot sunlight, but she has said more than once it is a summer yukata.  Go figure.  Here’s her setlist…
Setlist
1. Saba Kaido
2. Ohisashiburi ne
3. Blue Light Yokohama
4. Tonde Istanbul
5. Koisuru Fortune Cookie (Enka Version)
6. Heavy Rotation (Enka Version)
7. Koi no Owari Sangenjaya
With a 30-minute set, Wasamin had to throw in 2-3 extra songs to cover the time.  However, she still did her normal three MCs (Songs 2-4 and 5-6 were song consecutively) It was an interesting setlist, and I wondered if she chose these songs because she felt they somehow conveyed a Latin vibe?  I guess Hisashiburi, Blue Light, and Istanbul are kind of exotic.  But if she really wanted to sing a Latin-esque song she should’ve performed Naraiuchi.  To me that’s the most Latin sounding song in her library! 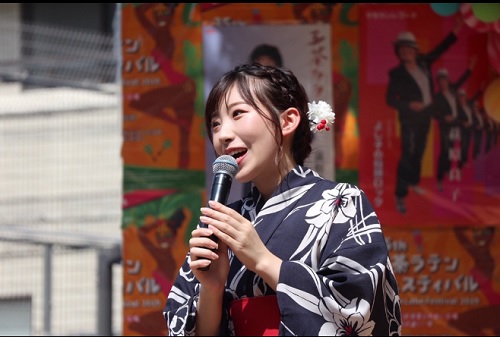 From Wasamin’s blog
As for the MCs, Wasamin spent a lot of time talking about the heat.  She also made a few comments about the cicadas, which are prevalent around Tokyo in the summer months.  In fact there was a tree rising over the stage, and it must have been full of cicadas as the entire event was being serenaded by a loud chorus of chirping.  I think she was saying that she’s apprehensive about them.  I dunno, they are really big bugs, and extremely noisy, but they are quite harmless.
Despite already having two drinks, I became overwhelmingly thirsty.  Finally during Wasamin’s 2nd to last song I walked over to the other side and ordered a melon flavored-kakigori.  The good news was the kakigori booth was really close to the stage, and since I was eating their product I could stand there and watch Wasamin, with virtually nobody around me.  I don’t know if she noticed me standing over there eating shaved ice, but I’m sure she would’ve gotten a kick out of it if she had.
Buppan
When I bought the kakigori, I found where the Minyo Girls booth was.  It was hiding behind the stage, next to a children’s area.  I knew I wanted to talk to Miyabi, so after Wasamin’s set ended I went over to the table to check out what concert tickets they had.  Unfortunately almost every concert they were selling tickets for conflicted with Wasamin events.  I decided that I would purchase a CD for one ticket, but their manager told me I could just purchase a ticket without any goods.  That was easy.  I immediately lined up to see Miyabi.  In the meantime Wasamin walked right by me to the table they had just set up for her buppan.  The line wasn’t long, but I had to wait a few minutes to see Miyabi as one of the fans who brings all sorts of professional photography equipment was doing a session with her.  Eventually she came and found me, asking which benefit I wanted.  I said 2-shot shamekai, and she enlisted Rinacchi to come over and take the photo. 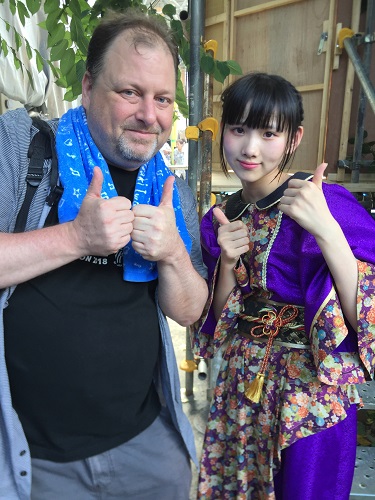 After the photo Miyabi asked me something which took me aback.  It’s kinda private, so I can’t really mention it right now.  But it hit me that she and her mother must have had a conversation about me since this was something I confided in her mom.  But suffice it to say that it totally tugged at my heart because Miyabi was so thoughtful and sincere.  I almost wanted to cry.  But I kept a stiff upper lip, thanked her for the kind words, and told her I would see her again soon.
I immediately queued up to buy Wasamin CDs, and score tickets for a 2-shot.  Both the goods line and the handshake line were long.  But it only took 5-minutes or so to get my tickets, and I was off to the other queue.  The handshake queue was partially in the sun, so I began to sweat.  Good thing I brought two towels to dry myself off.  Eventually they moved our queue to make room for the cast of one of the later acts, an-on stage children’s ballet class.  Finally it was my turn, and Wasamin immediately complained about the heat.  She then asked what pose… 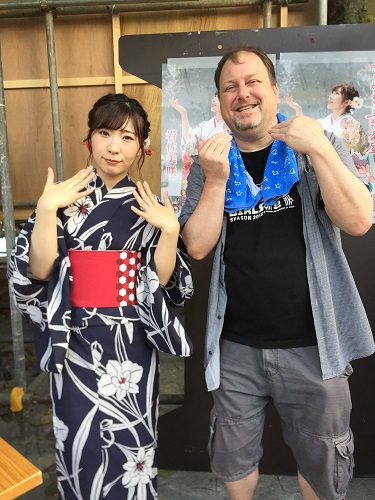 It’s our ‘complaining about the heat’ look.  Wasamin’s manager didn’t really give us much time to talk.  But I asked her about the Yukata, and she confirmed that it is quite cool despite the dark colors.  There were a couple other things I wanted to say to her but I got pushed out too fast, so I’ll save them for next week if I remember. 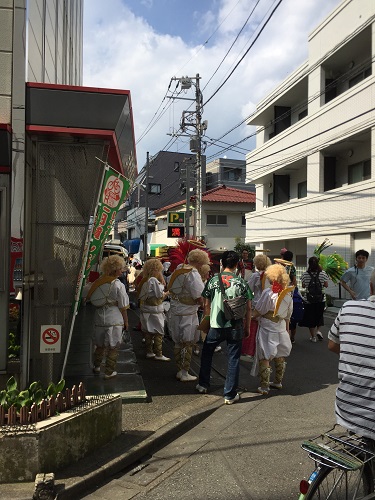 The parade was going on outside the event, so I went out the back way to avoid the crowd.  Although the backstreet ended up being the parade staging area, so I saw a lot of scantily-clad girls hanging out back there as I made my way back to the station, but not before grabbing a cold drink from a vending machine.  Wasamin has two mini-live events planned next weekend, both in Saitama Prefecture.  At first I thought I might not be able to make the Sunday event, but I was able to change my existing Sunday plans and clear the day.  So it will be another Wasa-weekend next week.  Yatta!
CK in Tokyo
Tags: Iwasa Misaki, Minyo Girls