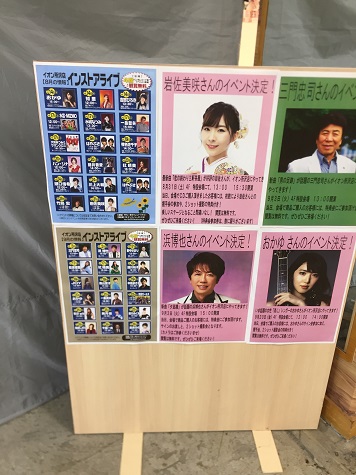 Jeez, it was less than two months ago that Wasamin appeared at this venue, the last time being a pre-order event for the re-release of her latest single. This weekend apparently will mark the close of the active promotion for the Koi no Owari Sangenjaya Special Edition. Her next promotional weekend in mid-September will mark the beginning of pre-order events for her upcoming album, Misaki Meguri ~Dai 2 Sho~. Although technically fans will still be able to buy the 8th single and get handshake/2-shot tickets… 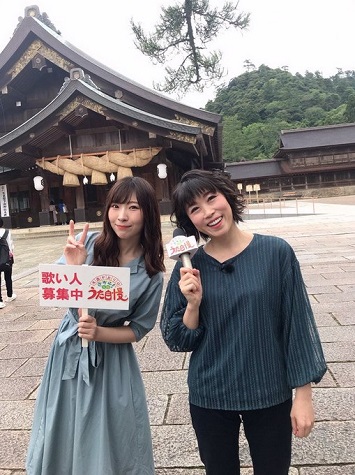 Wasamin was pretty busy this past week, first flying to Shimane Prefecture to film segments for the television show she co-hosts with Mizumori Kaori. Then yesterday she posted a video from Nishida Ai’s official YouTube channel of the two of them whispering and eating those cheese dogs that are currently all the rage in Japan…

Meanwhile I received the latest edition of Misaki Magazine, filled with photos and commentary of her activities in the last six months or so; The play she was in, Nagara Group concerts, her trip to Okinawa, the Wasamin ‘Club Room’ at BIG ECHO, and off-shots of her hanging out with Mizumori-san. Apparently her lunch cruise event didn’t make the deadline, perhaps next issue. There was also a flyer for Wasamin’s next bus tour event this fall. This time the fans will be going to Gunma, and Lockheart Castle.

Anyway, back to the event. I headed to Ikebukuro to connect with the Seibu Line, catching the express train out to Tokorozawa. Since I was early, I strolled through Tokorozawa’s main shopping street scouting my lunch options, getting to the mall around 20 minutes before the first show. There were plenty of seats available in the back, but I was able to find a seat in the third row on the right. I forgot to bring my Happi coat, but did remember to bring an uchiwa since this mall is notoriously stuffy and hot. Wasamin took the stage in her light, multi-colored kimono. Here’s her early setlist…

They screwed up and played the long version of Saba Kaido, which Wasamin wasn’t expecting. Usually at mini-live events she sings a version that skips the 2nd verse, and she was ready to begin singing the bridge when the song made the unexpected transition. She kinda guffawed and stumbled, but eventually was able to get back into the song. She sings the full version quite often, so it wasn’t like she forgot it. By the way, that happened once before at her mini-live in Niigata, although that time she stopped the song, and then started it again. Her main MC centered around her recent announcement of her 3rd album. She mentioned something about the jacket cover being special or unique…or something. I think she was teasing us a bit. But considering there are a couple of anime-related songs on the tracklist, that could be a hint. Aside from that, the television show with Mizumori-san, and her upcoming “Setagaya Police Officer for a Day” event were the other topics of the day. That, and of course how hot it is in that mall. After the show they formed the queue right next to where I was sitting, so I popped up immediately and was first in line. I figured I would get my first 2-shot out of the way quickly and have plenty of time for lunch. Wasamin and I struck a pose, but it was then decided that we were in a shadow, and that we should move about a foot or so to our left. We then re-posed… 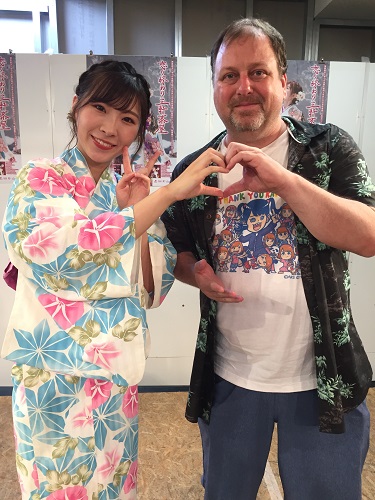 Rabu rabu. I told Wasamin that I was excited about ‘Hidarikiki’ and ‘Machibuse’ from the upcoming album, which are the two pop-oldies tracks. I went on to inform her that I received my new magazine. So pretty much congratulations visit. I was hungry so I left immediately to go find lunch. Having a little less than two hours to spare, I ate, then went to a coffee shop, and then another coffee shop before finally heading back to the mall. I arrived only five minutes before the 2nd show, but was still able to find almost the same seat as before. The late setlist…

The MCs were pretty much the same as the first show, with the obvious exception of the music screw-up. Interestingly, Wasamin usually promotes her next appearance during the final MC of the day. And considering that Sunday’s event is in Iruma, which is fairly close to Tokorozawa, one would think that she would’ve mentioned it. But instead she mainly talked about her appearance next weekend in Odaiba. Ya know, Wasamin gets so busy that sometimes she DOES forget what day it is. So I’ll give her a pass, and figure it just slipped her mind. Oh, and it is also interesting to people-watch at this mall. Vanda Records is opposite the clothing and shoe department at the mall, and the performance venue is an open space. Many of the songs she covers are classic oldies that are well-known by most people over-40, so it isn’t surprising to see people running over during the set to check Wasamin out. Anyway, despite being next to the queue, I took my time before getting in line. I only had enough tickets for one 2-shot, and I had plenty of time to make the next express train. Instead I packed my stuff, put my electronics on the charger, and then queued up. The line wasn’t very long…. 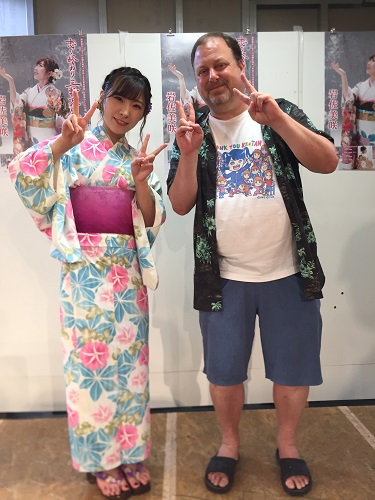 So this time I wanted to ask her why they were whispering on the video I posted above. It just seemed like an odd thing to do. I have never seen any of Nishida Ai’s other videos, so I asked if she always does this. Wasamin said no, but gave me an explanation that I didn’t really understand. In any case, I told her I liked when she whispered “I Love You” at the end. And with that my time was up.

I headed back to the train station, but not before I noticed that the mall did indeed have a food court. I went downstairs to check it out. Are you kidding me? Ramen, takoyaki, and ice cream. That’s it. It was the most anemic food court I have ever seen. For me the food courts are part of the fun of going to see Wasamin at all these malls. But at least the surrounding neighborhood is lively.

So tomorrow I will go back in the same direction, only this time to Iruma which is a few stops further down from Tokorozawa. Oh, and this is another mall with a lame food selection. But if I remember correctly there was a grilled meat and fish skewer shop outside the mall. So that may end up being the call.