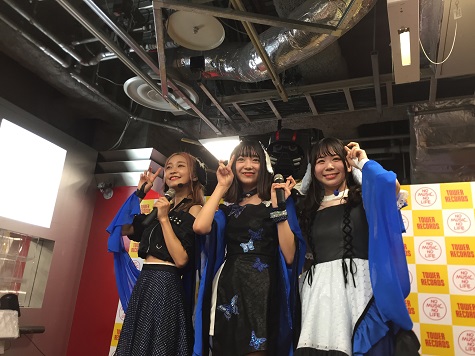 Like most idol groups these days, DESURABBITS scheduled a slew of mini-live events around Tokyo in celebration of their latest single, which officially released today. (September 4th) My plan was to attend as many of these events as possible, and at first it looked like I would be seeing quite a bit of them this week.  However, Wasamin’s conflicting schedule, an AKB48 theater win, and general self-control limited me to just a couple of events, which included Tuesday’s infamous ‘furage’ release where despite the official release being a day later, the CD is available for purchase.  I had no plans for Tuesday, and I live very close to Ikebukuro, which is where the event was taking place.  So it was a no-brainer.  Moreover, my friend Kenji decided that he wanted to see the live as well, so I was bringing a guest.

I decided to head over to Ikebukuro a little early, mainly to just get out of the house.  The forecast was for rain in the evening, and whadd’ya know, the moment my bus arrived at the station, the downpour started.  I retreated inside the JR Station, and then to the nearby Hub for a couple of snacks and cocktails before the show.  Luckily, the rain had stopped by the time I left for the record shop, arriving around 25 minutes before the event. 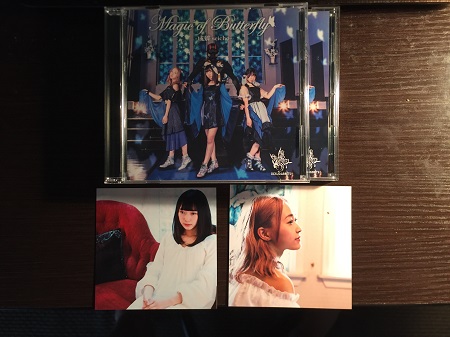 My purchase.  Emi and Yuzu photos were inside.

I expected a big crowd camped out for a closeup view, but to my surprise there were only a few people there.  I decided to get my CD purchase out of the way early, and while I was queued to pay a whole bunch of people showed up.  Luckily my friend had saved me a spot against the stage.  Bucho-san was on the stage working on his turntable (or synthesizer, or whatever it is)  He bowed to both Kenji and I, and I told him that it was my friend’s first time seeing them.  The girls showed up to do a quick sound check, singing a portion of both their new single and their 9th single, before briefly retreating behind the stage.

They returned to do a four-song set, beginning with their new single Magic of Butterfly, and transitioning into their debut single, ‘Idol Star Wars.’  I’m not sure what the third song was, but they finished with Soutsugyou Shojo.  It was great being right up against the stage since I got lots of nice reactions from all the members, especially Emi and Yuzu.  And I had a great view of their dance moves.  They did have a bit of trouble with the mics cutting out during the first half of the show.  Staff tried moving the base and the antenna to alleviate the issue, even swapping out for different mics, and eventually the issue disappeared.  At the end of the show the girls promoted their upcoming one-man live, which I’m not sure if I will be able to attend.  I mean I want to, but it conflicts with a Wasamin event.  Anyway…

Bucho handed my friend a bromide, and a paper uchiwa for being a first-time visitor.  Kenji decided he wanted to take a 2-shot with Bucho, so I waited up for him to make his purchases before queuing up together.  It was decision time for me.  I also had two tickets, and I knew I wanted to take a cheki with either Yuzu or Emi.  But who would I choose?  At first I thought it would be Yuzu since she “liked” a couple of my recent tweets, but Emi is the one who always smiles at me, and makes a big deal out of my blue eyes.  Eventually it was decision time, and at the last moment I chose Yuzu.  Staff tried to tell me to “wait a moment” in English.  I replied “Chotto matte?” and she was like “Ha, yeah!.”  When Yuzu realized I chose her she literally jumped.  If you read the post I did about their appearance at the A-rin Collection show, she was the one member who tried talking with me right off the bat, so she seemed really excited that I picked her… 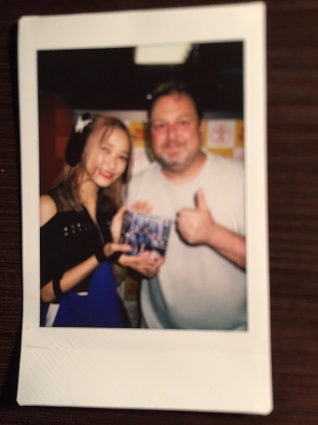 Posing with the CD.  I basically thanked her for responding to my tweets, and said I always write about my idol experiences on my blog.  I also mentioned that it was my friend’s first time ever seeing them.  At one point Emi came over and listened in on our conversation, at which point I told her that she would be my next 2-shot.  I thought the cheki would be signed since that’s what they did at their Akihabara pre-order event, so I was surprised when Yuzu handed me the cheki with nothing on it.  But no matter.  Kenji was just finishing up with Bucho, so I went over and talked with both of them for a brief moment before we gathered our things to leave.  Kenji was given a second uchiwa, so he handed one to me. 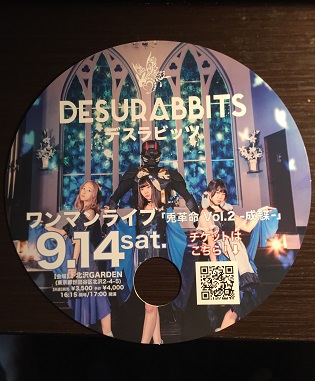 The next release event is tonight at HMV and Books in Shibuya, but I won’t be able to make it.  I also can’t make their Saturday event in Kinshicho.  But I am planning on going to their Sunday event in Shinjuku.  Hopefully by then I will have collected all of the available photos inside the CDs.  I’m guessing there is one for each member?  And one for Bucho too?  We’ll see.