Monday wrapped up a full three-day weekend of Wasamin events, at a mall I am well familiar with.  Wasamin’s last visit to Aeon Mall Hinode in the rural part of Western Tokyo was the wrap-up of her 6th single (Saba Kaido) promotion in 2017.  It was a memorable event for me as I won a janken contest for a signed Wasamin cheki at the end of the event. 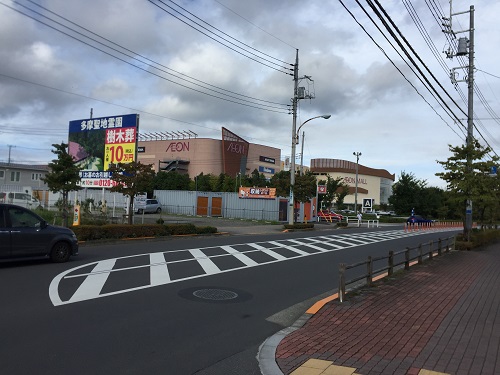 The mall is also memorable for being out in the ‘sticks’.  To got there you have to take the Ome Line or the Seibu Shinjuku Line from Shinjuku out to Akishima, then transfer onto the JR Itsukaichi Line toward the mountains and a tiny suburb.  From there it’s a one kilometer walk to the only action in town, the mall.  And what a lively mall it is!  One gets the feeling that everyone living nearby converges on this place for their weekend activity.  It houses a large movie complex, plenty of nice restaurants, and all sorts of shopping choices.  It’s amazing to see how bustling the place is in comparison to the quiet town that surrounds it.  And for that reason it is a great place for Wasamin to do a mini-live.  She always draws a big crowd at places like this.

I needed to head out early to make the 12:00 show since it takes me over 90 minutes to get there.  It was raining steadily in Central Tokyo, so I decided to take one of my old umbrellas with the plan to ditch it later on.  Ironically, the umbrella broke as I entered my local station, so I ended up tossing it early on.  Luckily the rain stopped a short time later.

I decided to head to Western Tokyo via Takadanobaba Station since it was a cheaper fare.  Upon transferring trains in Haijima I didn’t see any other Wasafans on the small train, which concerned me slightly.  But when I arrived at the station I saw two fans exit the end car, so I knew I was in the right place. 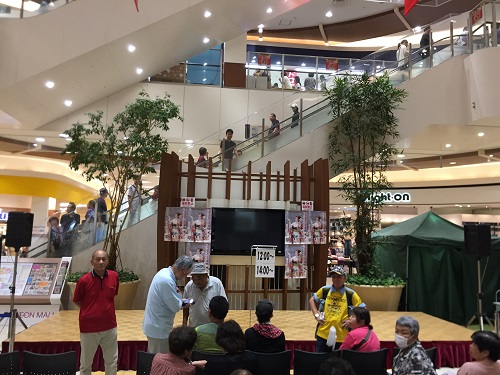 Entering the mall, all the seats were taken.  So I decided to grab a cold drink and relax before returning to the stage.  I donned my Wasa-Happi coat, which drew the attention of a few locals who began asking me a lot of questions.  They cleared a spot for me to get a nice view, which was very cool of them.  I saw Wasamin coming down the hall toward the stage before the show, and she gave me a little wave.  Eventually it was showtime, Wasamin wearing the kimono from the new album cover,  Here’s the early setlist…

Wasamin noted that she had performed at this location a few times before, but it had been quite a while since the last time.  She also spent some time talking about the Setagaya City Police Event she participated in on Sunday.  By the way, before the show we were again asked to keep the cheering to a reasonable volume.  Ya know, I am beginning to think this might be a new Tokuma policy, rather than the request of the mall since this place was fairly loud in general.  It was also ironic since Wasamin performed Niji wo Watatte, which is one of her famous audience participation songs.  At the end of the day we essentially cheered normally, but nobody really went overboard.  I was around 8th in line for buppan, and decided to do a horizontal shot for a change… 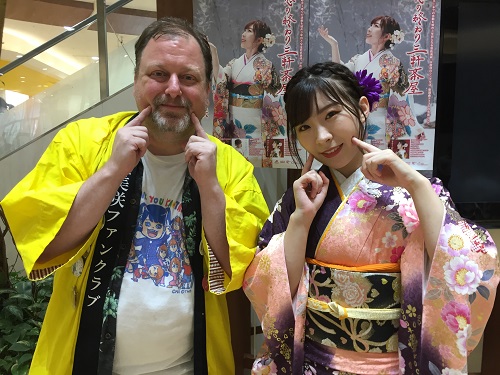 So I basically congratulated her on the Setagaya event, and told her I had a lot of fun.  Moreover, I mentioned that was disappointed that there was no buppan, as I really wanted to chat with her and take a 2-shot with her wearing the police outfit.  It was funny though, Wasamin seemed to have a concerned look on her face while we were talking.  I have a feeling that I know why, but I wanted to make this event an upbeat one.  In any case, I decided to split for lunch…. 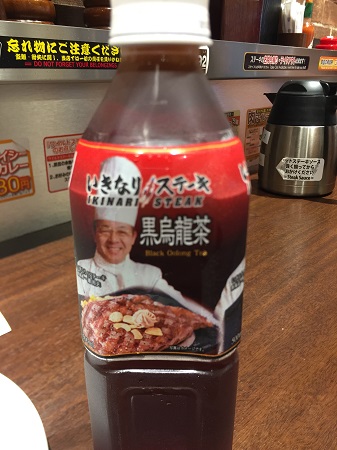 Jeez, for a mall in the outer burbs like this one, the food choices were amazing.  The food court featured a Tomato Ramen chain I really wanted to try, as well as a few Western chains.  Downstairs were a bunch of sit-down restaurants, including Ikinari Steak.  It had been a while since I had enjoyed Ikinari.  So after checking to make sure they were offering their normal lunch special, I queued up.  Little did I know the wait would be almost 40 minutes, but I love this chain, so it was worth it!  After lunch and a couple breath fresheners, I was back to the stage, taking a standing spot on the right side.  The late setlist…

Wasamin decided to bait the fans into the “So desu ne!” bit, and kept ending sentences with “ne” just to get us to react.  She has really started getting into the spirit of the various shtick the fans like to do, as it always gets a good laugh out of the local fans.  I was sort of surprised she performed ‘Blue Light Yokohama’ as she usually saves that one for performances in Kanagawa Prefecture.  But it’s a nice song nonetheless.  She has also started promoting her blog lately, today mentioning a couple times that she posted pictures in her police uniform, and for people to check them out.  When she was in AKB she was really bad about updating her blog, but ever since she switched back over to Ameblo her blog gets updated multiple times per day, although some of the posts are written by staff.  Anyway, I took my time queueing up for my 2-shot, as I knew I wanted to stay until the end of the event… 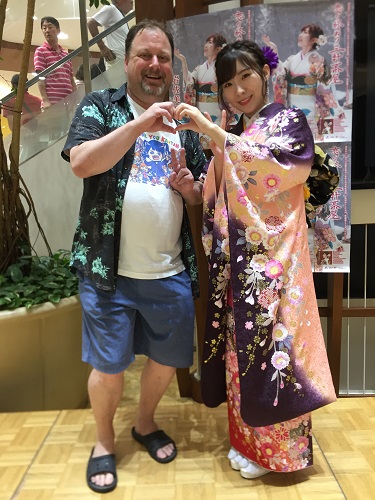 Just before her manager took the shot a flying bug zoomed in-between us, as Wasamin ducked for cover.  She refused to re-pose until she knew the bug was gone, which took at least 15-20 seconds of her frantically looking around.  I was laughing the entire time, and she asked if I wasn’t bothered by bugs.  Well, honestly it depends on the bug.  I don’t like bees or wasps, but the rest I can tolerate.  I then reminded her of how the mosquitoes had completely devoured me this summer.  And with that I told her I would see her next weekend.

I stuck around for the end since this may be my last Wasamin mall event for a while.  The queue was fairly short, and I was hoping the event would end soon since the local train runs infrequently (2-3 times per hour) and if I didn’t make the 15:10 train I would be waiting for quite a while.  Wasamin bid her farewell at 14:55, which gave me less than 15 minutes to get to the JR Station.  I even mentioned it to a few of the other fans, but they were like “Yeah, whatever.”  So I took off in a brisk walk, and made it to the station three minutes before the train arrived.  (IIRC, the last time I came here I wasn’t so lucky)

Next Saturday Wasamin will be holding her “Wasamin Greeting Vol. 2” event.  If you recall “Volume One” was the event where she and I posed with beer and scuba equipment, so that should be a blast.  As it stands now, unless there is a last-minute addition to her schedule, that event may be the last chance I have to hang out with her before I fly to America, so I better make it count.