In the last month or so I have really been indoctrinating myself into the world of DESURABBITS.  After going to their various release events and special lives, the natural progression was to attend their upcoming one-man show.  However, at first I had dismissed the possibility due to there being a Wasamin event on the same day, and personally I try to avoid stacking multiple lives/concerts into one day.  That said, I really wanted to go to this show, and I was promised by one of the fans I have become friendly with that DESURABBITS’ one-man lives are on a completely different level, and it would be an awesome time.  Moreover, I wanted an opportunity to purchase more of the group’s goods.

I checked both Wasamin and DESURABBITS’ schedules, and there was around a 2-hour window between their respective shows.  Wasamin’s event was in Central Saitama Prefecture, and after a brief conversation with Bucho-san at their Kinshicho mini-live he worried that it might be too far to make it.  But checking the Hyperdia train schedule website, the trip would take less than an hour, so if I made a 3 p.m. train I could even get to the venue before doors opened.  With that in mind I made my ticket purchase via LivePocket.

Everything went as planned.  I made my train, and arrived at Shimo-Kitazawa Station before 4 p.m.  After finding the club I immediately went down to the basement where the goods were being sold.  My primary objective?  The new concert T-shirt.  It came in two colors, and in sizes up to XXL. Luckily when I got there they had the color I wanted and the size I wanted, so I was set with that.  My secondary objective?  But some of their older CDs for buppan tickets.  What I really wanted were some of their old ‘Ramen Edition’ CDs, but they had sold out of all the versions I was looking for.  So I went with my backup plan to buy their 2nd album, which afforded me two handshake tickets. 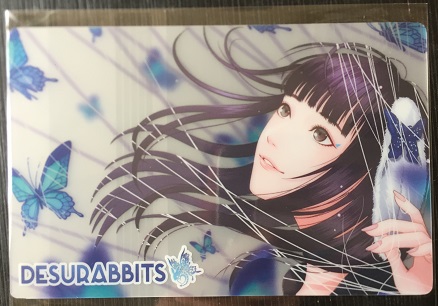 Bonus photo I received for buying 5000 yen in goods

At this point I was informed that they were not allowing bags in the venue, and that we had to store anything we weren’t carrying in a locker.  Oh, and the lockers were 300 yen, quite a ripoff.  Since I purchased my ticket quite late in the game, I knew I would be allowed in toward the end.  But it wasn’t that big a deal, and if I hadn’t opted to get my prerequisite drink I could’ve scored a spot relatively close to the stage.  Though it’s not like this venue is very big, and even if you are in the back you can see the show quite clearly.  In fact, I found a great spot in the back, and was going to watch the show from there, but then I became overcome with thirst.  So I went back to the bar where I found out a bottled water cost 600 yen.  WTF???  But I was so thirsty, so I paid it.  In the meantime someone took my spot on top, so I ventured down to the middle of the floor.  It was getting close to showtime… 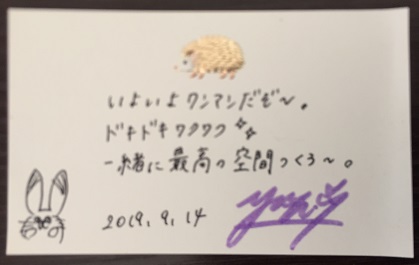 Everyone was handed a note when they entered the venue.  I think that is Yuzu’s signature?

There was a video screen in front of the stage, and the show started with a VTR.  It was a mock variety/interview show, with the group’s two managers playing the hosts, the girls playing the guests, and Kanzaki Akira (Yes!  Bucho out of costume!!!) playing a wacky third commentator.  The whole thing was a setup to make fun of the girls, but the three of them, especially Karin, couldn’t stop laughing through the entire thing.  That was until they individually started being picked on.

Being that the show was over two hours, they played just about every song that I know from their catalog, with the exception of “Desurabi Lando.”   Each member had their own solo section; Karin performing a cute song that involved everyone making a “rabbit hand gesture,” tapping their head, chest, and various other things.  Bucho was also onstage and participated.  Emi performed a ballad, with Yuzu doing an interpretive dance in the background.  Speaking of Yuzu… 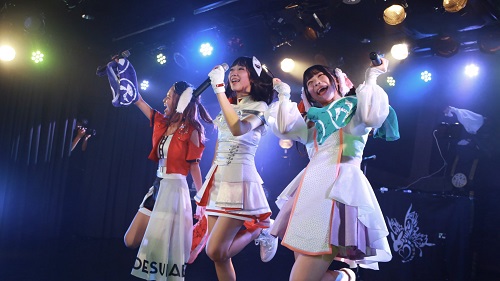 Yuzu performed her solo song “Demo, Nigen na” from the 9th single.  However, she sang and danced it in the middle of the audience.  The fans cleared a path for her in the center, and she ran up and down, high-fiving fans.  In fact, she was having so much fun, and laughing so much that she stopped singing, which got a huge laugh from the other girls. (especially since it exposed the singing track on the recording)  I looked up to the stage and saw Emi reacting.  It’s interesting though, the solos really showed how different each member’s style is.  At the end of the day I thought they all did a great job.

By the way, I will give this club credit for having a very nice sound system.  The whole show sounded great. 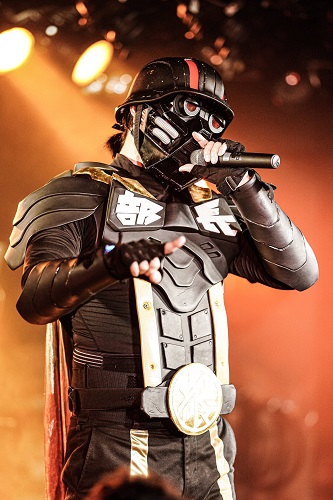 On of my small complaints, and I have made it before, is the issue of having fans on the floor kneel or sit down during various portions of the show.  Minyo Girls do this too, although they do it once or twice during their one-man shows.  For DESURABBITS, and I am not exaggerating, we were asked to sit or kneel 10-15 times.  For one, kneeling on a concrete floor is not comfortable.  Moreover, I am not a young guy, and cannot bounce down and back up like I could 20 years ago.  So every time they motioned for people to sit I was like “Oh crap, here we go again.”  A few times I just kinda crouched down a bit, but for the rest I sat ‘indian-style’ which seems to be the most comfortable position on that surface.  Look, I get it’s to let everyone get a view of the stage, but for some of us it isn’t as easy as one might think.

Switching gears, another fun aspect of fan experience is the dancing and running around that happens on the floor.  It’s fun, and good for fan camaraderie.  Not to mention at one point I got spun all the way to the stage, and for a moment thought I might stay there since it was an excellent spot.  However, I noticed some of the other fans retreating back to their original spots, so I followed suit. 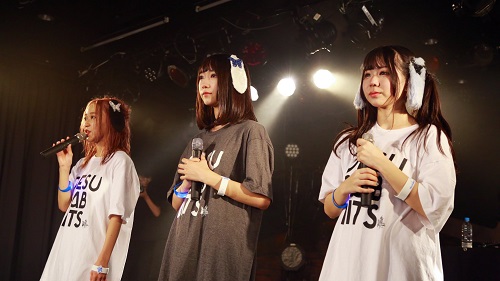 The encore chant commenced almost immediately after the main show ended, and it went on for a long time.  I wasn’t keeping track, but it was surely more than five minutes.  The girls returned to the stage wearing the concert shirts, Emi was wearing the same grey color I purchased. (and was wearing) Many of the fans also bought the small bracelet which lit up in blue.  Each of the members (including Bucho) made a little speech, talking about what the show meant to them, what the group means to them, and how important their fans are.  A couple of them, especially Emi got pretty choked up.  They also made a couple of announcements.  I think another concert may have been one of them, and I am pretty sure the other announcement was for an upcoming third album.  So we have that to look forward to.

I didn’t leave the floor after the show, waiting for the 2-shot queues to form.  I had pretty much decided that I would do a 2-shot with Emi (I also considered Bucho) and ended up first in line.  However, we were informed that the ‘Group-Shot’ people would be going first.  There was around a 30-minute wait before buppan started, and in the meantime the Zen-shot queue had grown quite large.  I first guy to go took the better part of a minute, and I thought “Jeez, at this rate that queue will take more than an hour!” since there were over fifty people lined up.  Bucho must’ve thought the same thing, since immediately afterwards he spoke to the other managers apparently telling them they need to make the line go faster.  So they removed the “signed” aspect of the chekis, and everyone got a picture, a quick handshake, and that was it.  More like 20-30 seconds per person.  Still, it took them over 30 minutes to clear the first line, after which the girls moved over to the other side of the venue for 2-shots.  In the meantime Bucho came over and apologized to me for it taking so long.  I told him it had been a long day since I was at Wasamin’s event all afternoon, and came straight from there to this show.  He was like “Oh yeah, all day huh?”  They rearranged the queues giving each girl more room, and a moment later Emi called me over… 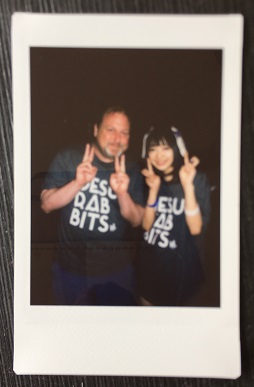 I pointed out that we were twins, since we had the same color shirt, also mentioning that it was my first DESURABBITS T-shirt, and I was so happy to get it.  I finally told her that I loved the solo part of the show.  Emi thanked me, and apologized for our visit being cut short.  Personally, I didn’t mind since I was so ready to get out of the venue!  I was tired from the long day, and just wanted to find a quick dinner, and then go home.

Overall I think the group put on a really nice live show, and I would definitely go to their one-man again if given the opportunity.  As for Shimokitazawa Garden, it’s a decent place, and quite roomy.  So it wasn’t like the fans were crammed inside a tiny venue.  Speaking of the fans, despite this being a “Death Pop” group, they seem to have a great time without going too crazy.  There are a lot of young females in the audience, as well as children, and I think the fans in many ways are mindful and respectful of that.  Obviously they will need to rethink how they do buppan, since they had to change the benefits on the fly due to overwhelming demand. 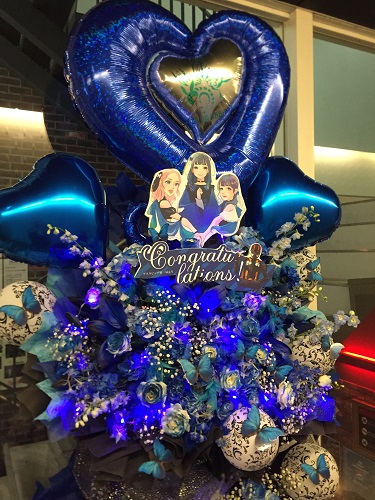 As for my next DESURABBITS adventure?  they have a couple of mini-live events scheduled the last weekend in September, and I will be going to at least one, if not both of them.  So look forward to those reports!