BTW, the next couple of posts are going to be somewhat out of order, for whatever reason. (I have been really busy this week!)

I knew it had been a long time since I had properly seen FES☆TIVE, over 16 months. (I’m not counting my chance encounter with them at Niku Fes in May) Since I knew I would be leaving Japan for an unspecified period, I checked the schedules of all the groups I like to find events to possibly attend. FES☆TIVE just happened to be releasing a new single this week, and had a full schedule of events I could potentially go to. The issue was that I was in the middle of attending a training, and while I could go to most of the lives, it was a question of how tired I would be. I first planned on going Tuesday in Shibuya, but bailed due to feeling exhausted. Same with Thursday, where they were appearing at 9 p.m. at Tower Shinjuku. Too tired. However, Friday was the last day of training, and I felt like blowing off a little steam. So despite Kawasaki being the furthest event from where I live, I decided to go.

I had been to Tower Records Kawasaki a couple times before to see Wasamin and Kiss Bee. It is very close to the station on a posh shopping street. I needed to transfer onto the Tokaido Line at Shinagawa Station, but those trains were running 15 minutes late. I still made it in plenty of time, but the trains were really crowded due to the delays. Arriving in Kawasaki, it dawned on me that the Lazona Oktoberfest was still going on, so I headed over for a quick pint before the show. 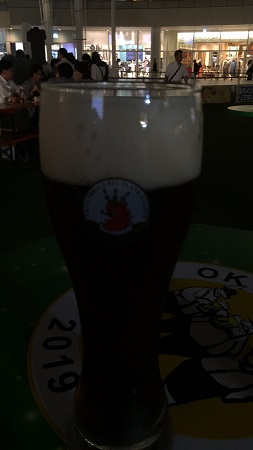 BTW it was dark, so I didn’t notice until I took a sip that they gave me the wrong style of beer.

I made it to the store around thirty minutes early, and to no surprise it was already packed with fans. This is part of the reason I rarely see FES☆TIVE anymore. All idol groups seem to go through a similar cycle, and at some point the group crosses a threshold of popularity where the younger fans begin following the group, which ultimately chases a lot of the original, older fans away. Kiss Bee, another group I like, is going through the same changes right now too. The crowd becomes a bit more rowdy, the lines get longer, and frankly the events are somewhat less fun, at least in my experience. That said, I still love Hinari, and want to support her whenever I can. 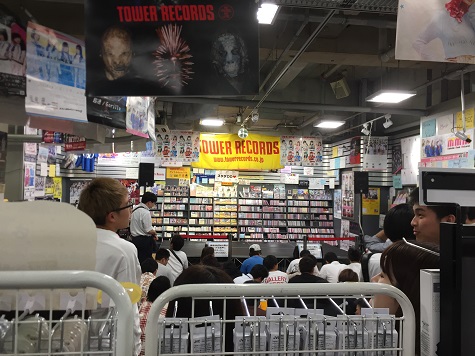 I didn’t want to stuff myself into the crowd, so I decided to play a subtle ‘gaijin card’ by standing at a CD listening bar (with a great view of the stage) checking out the new Blink-182 album. (It was pretty good) I am a foreigner, and I was wearing a suit, so I’m sure nobody thought I was there to see the mini-live. In fact, a few fans began milling around me as if they were waiting for me to finish listening to the CD and leave. My cover was almost blown when I saw a representative from Tokuma who knows me from Wasamin’s events, but he was so busy that he paid me no mind. Eventually the group came out for a rehearsal…

Uh, oh. Where’s Hinari??? She wasn’t rehearsing with the rest of the group. I quickly checked Twitter. Hmm, she said she was in Kawasaki, she asked everyone to come see her. Just then, one of my old FES☆TIVE-friends Pin came into the shop. She didn’t even notice me until a grabbed her as she passed me. I asked her about Hinari, and she was sure Hinari would be performing. Pin asked me if I had purchased CDs yet, which I hadn’t since I wasn’t sure if Hinari was there. It turned out she had extra tickets, and sold me a couple of hers (and gave me one CD) so I was set! Eventually the girls came out for the main live and passed right by me but Hinari had her head down the whole time. 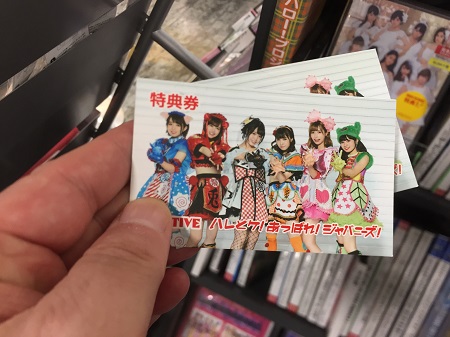 They did a five-song set. I am fairly sure all the songs they performed were relatively new, which meant I never heard any of them before, including the new single which I heard the first time during rehearsal. To be honest, I thought all these new songs were much better than their early stuff. A little more edgy and intense, slightly less “cute.” So in that respect I am really happy about the group’s direction, although the new single, Haretoke, Appare Japanese is very cute.

Hinari eventually did notice me standing toward the back, and waved to me a couple times during the show. Pin really gets into the calls. Unfortunately I was unfamiliar with all the songs, so I just followed her lead. Eventually the show ended, and this time Hinari did wave to me as she walked by. The Tokuma rep also finally noticed me, commenting that he’d never seen me in a shirt and tie before. I told him I wanted to become a salaryman; “Honto???” LOL

Everyone went where they thought the buppan lines would form, but then staff informed everyone that the lines were forming on the other side. There was a bottleneck to get over to the queues, but I took the long way around ending up 9th in line to see Hinari. Pin wasn’t nearly as lucky, ending up much further back. It was an almost 30-minute wait for the girls to come back out for buppan. It was hot in the store too, so not the most comfortable wait. It ended up being 10-15 minutes before my turn. 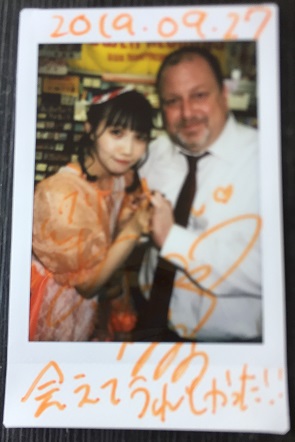 I wasn’t sure how Hinari would react. I know in situations like this, where a fan hasn’t been around for a long time they are thinking “Where the hell have you been!?!?” In fact, I heard from other fans that Hinari had been complaining about a lot of her fans abandoning her when the group went through their major lineup change. But ultimately idols are just happy you have returned, as was Hinari since she had a huge smile on her face when I came over. I essentially filled her in on what’s been going on with me over the past year. By the way, she smelled incredible! I’m not sure what kind of lotion or perfume she was wearing, but I could clearly smell her all over my hands and shirt for the rest of the night. I am guessing there may have been some pheromones present in the scent too, since I felt as if I was under her spell. LOL. 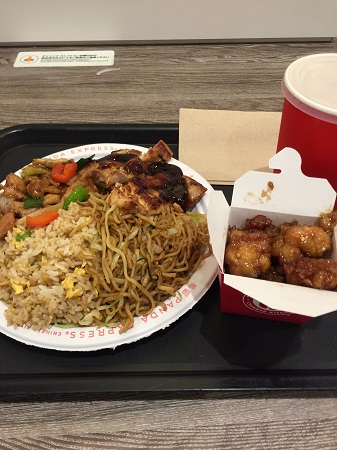 After that I went back to the station for dinner. Panda Express! I knew I had a long ride back, and there were a lot of people on the platform, so I splurged for a ‘Green Car’ ticket, which is like a luxury train car. I am so glad I did too since the entire train was packed for most of the ride, and meanwhile I was dozing off in my comfy reclined seat. FES☆TIVE have more events this weekend, although I am probably going to miss them. However I will try to not let so much time go by before the next time I pay Hinari a visit.