The last month or so I have taken a bit of an ‘idol vacation’ of sorts. I left for America in early October, unsure when I would return to Japan. Perhaps it would be a month, two months. I did have my new work visa in process, so hopefully it wouldn’t be too long. I was en route to the airport when my new employer called me, asking if I could cancel my trip. Uhhh, a little late for that. I had important business to handle in California too. I negotiated a return in twelve days, which they accepted.

So I returned to Tokyo on the 15th, with less than a week to find a place to live and get ready for my new gig. But first there was an issue with my visa application. Nothing serious, but in the usual bureaucratic fashion it caused all sorts of issues, including a delay in starting my job. I then had my accident, resulting in three broken ribs, and a postponement of my start date until November so I could hopefully recover. In the meantime I noticed the AKB48 kenkyuusei had a few shows coming up, including the Halloween night stage. I decided to apply, and ended up hitting on my first try, getting a really low cancel machi number. So I was pretty much guaranteed a win, score-a-rooni!

This would be my 55th theater win. I now live in Central Saitama Prefecture. Not too far from Tokyo; less than 40 minutes from Ueno or Ikebukuro via the Takasaki Line or Shonan-Shinjuku Line. But it’s far enough that I decided to make a day of my trip into Tokyo, first spending the early afternoon at immigration, then relaxing at Excelsior Caffe in Akihabara until showtime. I usually go to a bar for a couple cocktails before theater shows, but since I am still taking painkillers for my injury I stuck with iced tea. Anyway, after grabbing an early dinner I got to the theater around 5:30, stored my bag, and took a look around at the Halloween decor… 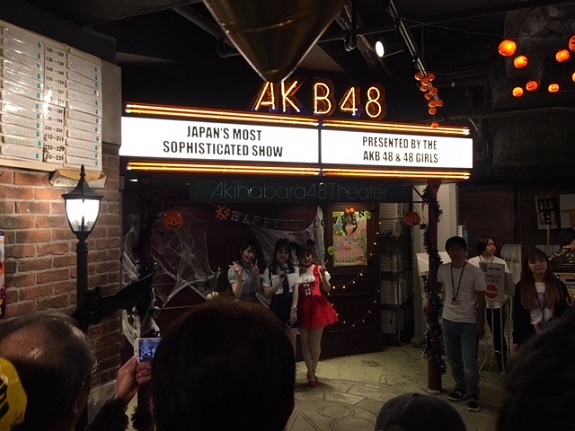 It was cute, and the entire staff were in costume. In fact a lot of fans came in costume too. The winning email stated that costumes were okay, as long as your face could be seen, there were no dangerous object or weapons, and that the costume didn’t block anyone else’s view. Frankly, I had no interest in wearing a costume, especially with the brace I was wearing around my rib cage. If anyone asked, I told them I was dressed as a foreign fan. By the way, while I was looking around I noticed a small commotion around the theater doors. It turned out that Maeda Ayaka, Kawamoto Saya, and Suzuki Kurumi were there, posing in their Halloween costumes. Cool, I was glad I got there a little early I waited my turn and grabbed couple of pics. 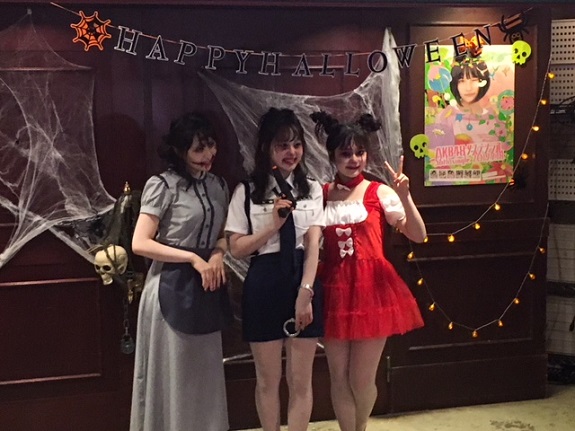 After that came the critical question of when I would purchase my ticket. there was less than 15 minutes until the deadline, but I usually like getting a higher number since I have had more luck with them. But eventually I decided the heck with it and queued up. I got ticket #98. Would this be a lucky number? All I knew is that I really wanted to sit down for the show. In fact I debated talking to staff about it in the hopes they would allow me to sit in the enpou section or something. But I decided not to be a pain in the ass and take my chances…

Well, I wasn’t too lucky this time. We got called in around 15th (out of 25) 240-249, 230-239, and 1-9, 200-209, and 10-19 were the top five, so I guess you had to be really early or high cancel machi to get a good spot for this show. 100-109 was called sixth, and if I had waited around 30 seconds longer to queue up I would’ve gotten in with that group. I entered the theater and noticed a couple empty seats in the last row left side, but I was out of position to get them. I instead went to the far side and half of the last row was empty, so I followed the two guys in front of me into the row. However, they took the inside seats and wouldn’t let me by. They finally moved over, but then some dude tried to steal the seat from me. Luckily staff was watching, and told the guy that the seat was mine. Ultimately it was a really crappy view, as I couldn’t see the middle of the stage at all. But at least I was sitting down, and I could see the right side perfectly.

Unfortunately for me, Ranchan, who is my favorite AKB member, spends most of the time in the center of the stage, so I would get few opportunities to interact with her. Instead my focus was on the members who spent a lot of time on my side. Honda Sora, Okada Rina, Ishiwata Sena, Nagano Megumi, and Tada Kyoka were among the members I interacted with the most. Kyoka and Sorachan are always enthusiastic when they spot me. Okarina seemed to be side-eyeing me a lot, and Suenaga Yuzuki kept pointing at me. I know Senatan spotted me, but as much as I like her, she is tough to read.

During the opening MC they girls were talking about their favorite Autumn foods. When one of them (I forget who) mentioned kaki, I was like “Yes!” I love oysters! Speaking of Autumn grub, the other day a friend of mine was asking about pumpkin pie, since he had never tried it before. It’s kinda rare in Japan, but we resolved to find one sometime this month. Later on the members were trying to do their most seductive “trick or treat.” including Senatan and Ranchan. Too bad I couldn’t see it at all due to the pillar.

By the way, I normally try to participate in the calls during the show.  However, three broken ribs made it quite difficult to project my voice.  I mean I have come a long way since last week, when I couldn’t even take a full breath.  But it still hurts to cough or sneeze.  So I did cheer for Ranchan (as well as Sorachan and Senatan), but I usually waited for the cheering to die down a bit so I could be heard.

After the encore we were told there would be a “Halloween Party,” and the girls retreated backstage to change into costume while Maeda, Sayaya, and Kurumin did an extended MC. Additionally we were told we would be getting special message cards from one of the members after the show. The party ended up being performances of Halloween Night and Sustainable. Ranchan looked especially cute in her outfit although I wasn’t sure what she was supposed to be. As for the final goodbye, I got the usual reactions from the usual members, and Senatan did light up when I passed her. Ranchan pointed to where I was sitting, and said she saw me. Good, since I was making every effort to get her attention, LOL. As I left the theater staff gave me a small envelope. I just hoped I got someone I liked, which is about half the team…

I wasn’t sure if there would a photo pack since they didn’t take a photo during the show. It turned out they took the group pic earlier, so I queued up to purchase one. In the meantime I opened my envelope. Michieda Saki? Uggghh. Not who I was hoping for, and I knew she would be a tough trade. Not to mention she didn’t write anything on the back of the card, which I noticed most of the members did. Luckily, with the help of my friend “SunnyHighland” I was able to find a Saki fan to trade with, although he had Suenaga Yuzuki, who 1) is also not among my faves, and 2) also didn’t write anything on the back. However, I did like the little message she wrote… 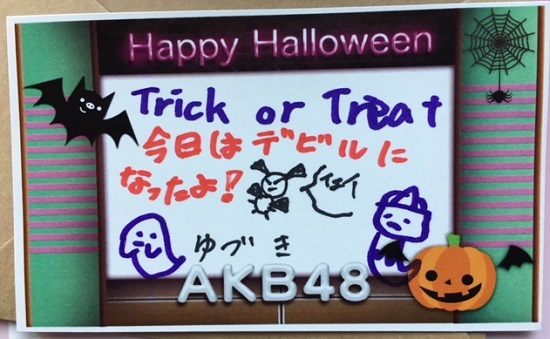 “Today I became a devil.” LOL. I tried to trade it for someone else. I knew Ranchan, Sorachan, Kyoka, and Senatan would be tough to get, but I would’ve been happy with Satomina, Sato Shiori, or even Okada Rina. Ultimately I accepted my fate, I would be going home with my Yuzuki card.

I headed back to the station, and back home. I couldn’t wait to take the brace off I had been wearing all day. Luckily the moment I got on the train a friend of mine began chatting at me, making the ride fly by. Ultimately it was nice to have a little idol interaction again, although my event frequency is going to be significantly curtailed due to my work schedule, location, and budget. But I suppose I will occasionally treat myself to an AKB theater show or handshake event. We’ll see how things shake out.