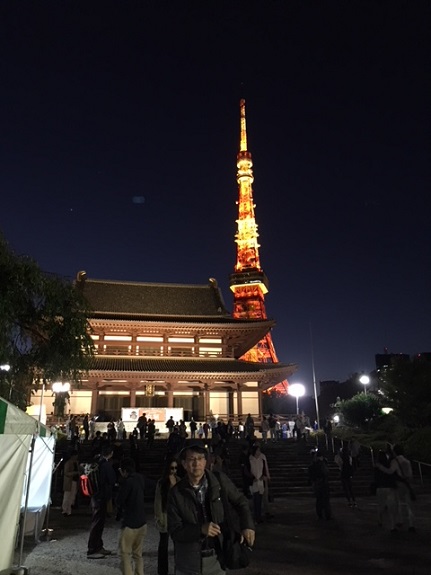 When I returned to Japan last month, I fully expected to see Wasamin at least a couple times before I moved to Saitama and started my new job. Unfortunately her schedule found her outside the Tokyo area most of the time, and once I moved to Saitama I didn’t want to make the extra-long trek to Ibaraki or outer Chiba. However, I have always tried to attend the various Minato festivals that she regularly performs at. They were convenient to get to from my former apartment, and I could always visit my favorite pizza place/microbrewery nearby. So the afternoon before I started my new job, I headed to Tokyo.

Despite living in Central Saitama, the train ride into Tokyo isn’t too long, however it is a 1300-1800 yen round trip depending where in Tokyo I’m heading. I was still a bit sore from my rib injury, so I slowly walked the crowded Hamamatsucho streets to the temple, which is just a stone’s throw from Tokyo Tower. I immediately ran into Kentaro-san, who asked me when I got back to Japan. We walked over to the Wasamin booth, where I was hoping they might have Wasamin’s new album available for furage, but they were only offering pre-order. I decided to order one copy of the regular version (the one where she is wearing the sexy dress) All the seats had long been taken, and there were a lot of people standing, so I decided to stand a little further back and watch from a distance. 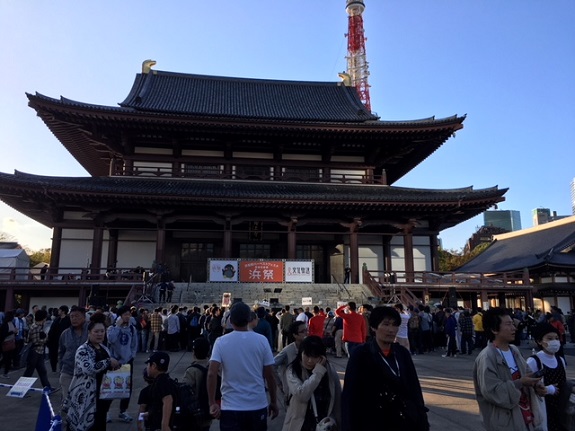 This turned out to be not so much a mini-live. Instead it was a one-hour radio show (which explained the 16:00-17:00 time schedule) Wasamin was one of four guests, the others being a pop singer from Hakkaido, a comedian, and a talento. She did open by singing Koi no Owari Sangenjaya, and later performed Watashi no Kare wa Hidarikiki. I was standing fairly close to Kentaro who was drawing the attention of everyone nearby with his loud Wasamin calls. I refrained from cheering very loud for her since right now it is painful for me to do. However, I did participate in the “call and response” when she sang “Hidarikiki.” Admittedly it was a little bit painful, but it is such a fun aspect of that song that I couldn’t hold back.

Wasamin was far and away the most talented singer on the program, although the comedian, who kept introducing himself as “Elton John” sang a totally respectable rendition of “Your Song” I’m not sure what his name was, but he was definitely the most well-known guest. Oh, and the radio show hosts too, who seemed to have quite the fanbase.

The show ended right on time, and I immediately headed back over to the booth where both Wasamin and the singer from Hokkaido were set up for meet and greet. The album preorder afforded me two tickets, which I planned to use for one 2-shot shamekai. The line to see Wasamin formed on the right side of the tent, and by the time I got there I was around 12th in line. I noticed everyone in front of the line were only doing handshakes, and I began to wonder for a moment if they were even offering 2-shots at this event. They were, so I handed my two tickets and my “new” phone to Wasa-manager. Yes, I was about to christen my new iPhone with its first Wasamin 2-shot… 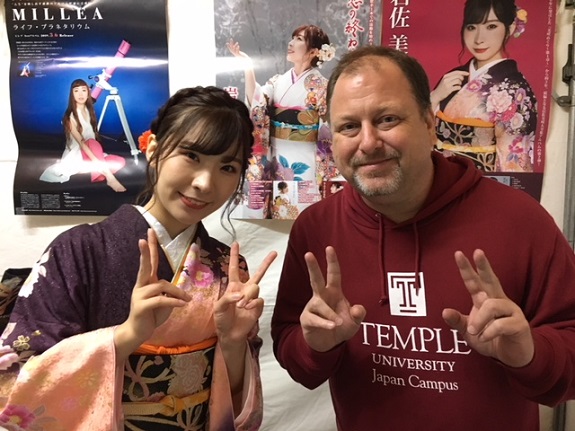 Considering how often I normally see Wasamin, and the fact I left Japan for a while, it seemed like a long time since I had seen her. But truthfully it had only been like five weeks or so. So Wasamin didn’t seem surprised to see me. I had to remind her that it had been over a month, and that I had gone abroad. I also related my injury story, to her shocked reaction. She asked how I was feeling. I told her I was in some pain, but was okay.

I wanted to see her a second time, but I have to be very mindful of my budget right now, especially since my first paycheck isn’t due until late-December, and I missed out on half a month’s salary because of the accident. In any case, I would be seeing her the following weekend, so no worries. I headed back toward the station for some pizza, a beer, and my ride back to Saitama.

This past week was the celebration of the release of Wasamin’s new album. Unfortunately I couldn’t make it to any of the events since they were during the week, and during the day. I could conceivably go to her Sunday event in Kasai, but Minyo Girls are performing in Konosu, which is very close to where I live. There will probably be a few more album events in the coming month. Hopefully at least a couple of them will be in Saitama.