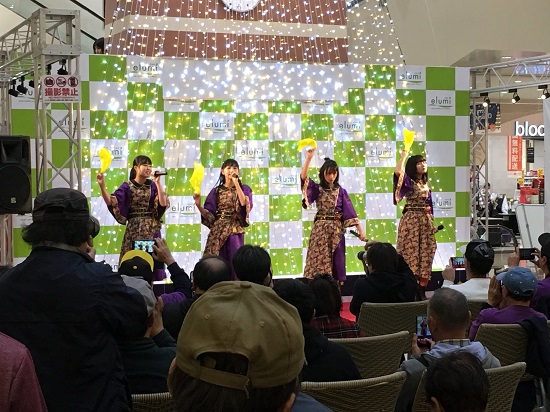 I had a big decision to make on Sunday. Would I head back to Tokyo for the second day in a row to see Wasamin? Or would I see Minyo Girls, who were performing at a mall quite close to where I’m now living? Actually, it wasn’t a very hard decision to make. Granted, I was sorry that I wasn’t going to see Misaki-chan, who is my kami-oshi, and who I have pledged my unwavering support. But I had just spent an afternoon with her the previous day, and I had also committed to be more responsible with my leisurely spending. Going to see Wasamin would require another long and expensive ride to Tokyo, while Minyo Girls’ event was less than twenty minutes from my apartment door to door. Moreover, I was really looking forward to telling Miyabi’s mom about my new job.

I originally planned on seeing both of the Mingaru performances. However, I messed up on the time of their early set. Not a big deal. One show was enough for me. I headed out in the mid-afternoon, first running an errand before grabbing a train to Konosu, which is just a few minutes north of where I live. I have been to this mall a few times before, the last time being Christmas Eve for a special Wasamin show. In fact they had already put up the Christmas decor, so it looked pretty much the same as it did the last time I was there.

I wondered why there was a four hour break between the sets. I turned out that Mingaru were splitting the stage with You Mizuki, who is another enka-idol, not dissimilar from Wasamin. She is also on the Tokuma Records label. I got to the mall in the middle of her buppan. She is quite cute and young looking, despite being in her late-30’s. I would’ve never guessed. Afte greeting a few of the Mingaru fans who I hadn’t seen in a while, I grabbed a late lunch at Hidaka-ya, some gyoza and a coke.

Around 30 minutes before their set, the girls came out to pass out flyers. Miyabi immediately noticed me standing there, and instead of her usual smirk she gave me a broad smile, as if she was really happy to see me. I actually got nice greetings from all four members who were there, including Yuua, Minori, and Ryo. The promoted item of the day was their third single, which I already have multiple copies of. My plan instead was to purchase a ticket to one of their upcoming lives. Either their countdown show on the 24th, or their “battle concert” with Wasamin on December 1st. I’d have to wait though since the ticket sales were reserved for after the live. In the meantime I saw Miyabi’s parents hanging out near Mister Donut. They waved to me, so I came over and filled them in on my recent move, and my new job. Miyabi’s mom has seemed really concerned about my future in Japan, so she was really excited to hear about what I was up to. After two live rehearsals (first Yuua and Ryo, then Miyabi and Minori) it was time for the show. 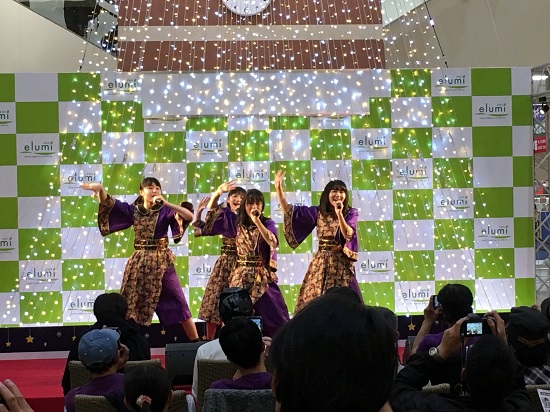 The group did a six-song set, which consisted of their three major singles, their last indie single, and two of their recent c/w tracks. There was quite a large crowd in attendance, and the two ‘wotagei guys’ were going 1000% intensity, drawing the attention of half the mall. At first I was right in front of them, so their antics were a bit annoying, but during the second song I moved over to the left side of the venue. Earlier I had the opportunity to score a seat, but decided instead to hang in the back, which is why the photos I took are all long shots. Oh well. I’d rather let the locals, the kids, and the silverbacks have the seats. I get to be close to these girls all the time. 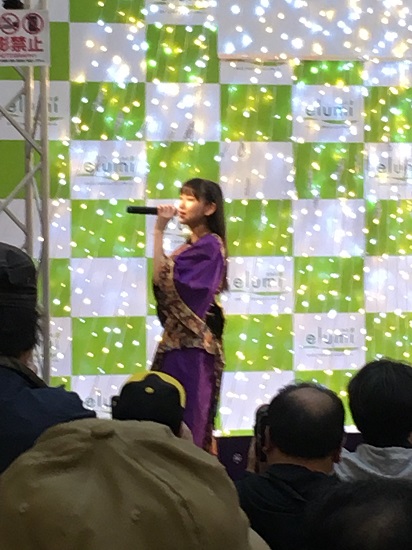 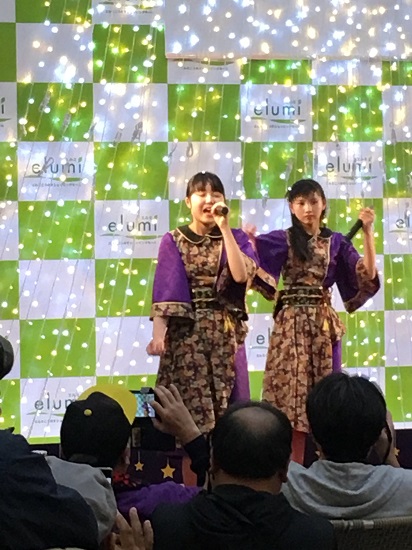 After the show, staff set up a sales desk for live tickets. Minyo Girls have quite a few solo-lives coming up; their monthly one-man shows, and the December show in Akihabara with Wasamin, which was the ticket I wanted Their manager asked me if I wanted a ticket to their November countdown live in Hamamatsucho, but I explained to her now that I’m living in Saitama, I must limit my trips to Tokyo. So as much as I would like to see the show, I had to turn her down. But I got the ticket I wanted, and I had two buppan tickets, so I was good to go. After the group shots it was time for individual chekis and shamekai, I was fifth in line, and since Miyabi was busy with a fan, I decided to go with Yuua first… 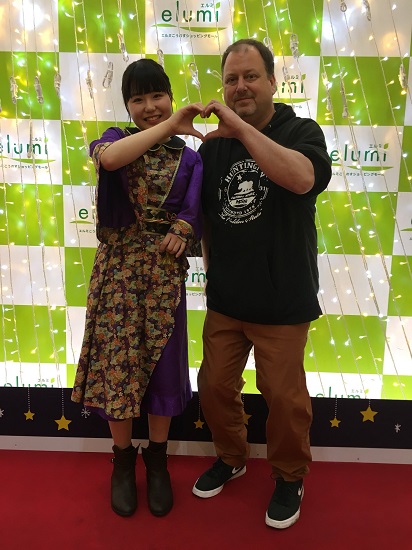 Miyabi looked slightly miffed I didn’t go to her first, but I would see her in a few minutes. In the meantime, I told Yuua that like her, I am now a Saitama resident, and that I was teaching Junior High School English. Yuua got really excited and immediately ran over to Miyabi to share the news. It was just too bad that Yuua’s mom wasn’t there, I am looking forward to talking with her about it. A short time later I requeued. The manager took off for a moment and Miyabi was running the queue. When she got to me I told her that she was my choice, and she seemed to want to move me to the front of the line, but we waited for the manager to return before I was invited to the stage. 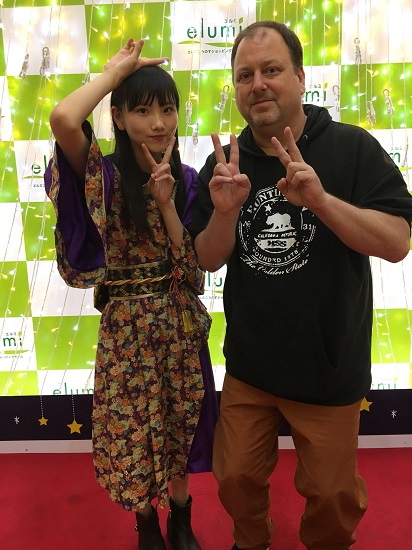 I love Miyabi’s pose, LOL. Since Yuua took the photo, I decided to give them both a few more details, specifically telling them which schools I am working for. Yuua’s eyes were bugging out of her skull. I was kind of afraid to ask he what was up with that reaction. (Which is why I want to see her mom) I don’t think Yuua lives in Okegawa, but she was definitely familiar with the schools. I think perhaps she knows people who go there? I guess I’ll find out soon enough.

I was out of tickets, but there’s a really nice supermarket at Elumi, so I decided to pick up something for dinner before heading back home. It was a fun day, and I’m glad I had the chance to catch up with Miyabi, Miyabi’s parents, and Yuua. I will see them again in a few weeks.