…and not necessarily in a good way.  What started as an exciting weekend, somewhat blunted by the announcement of an Influenza epidemic affecting the girls of AKB48, has now erupted into one of the most significant moments in AKB48’s short history…

Teams A, K, and B are being reformed beyond all recognition!!!  My next post was going to be a commentary on the set lists from the Budokan weekend.  But I guess I will scrap that, for now.  Instead lets take a look at the new teams, effective this coming October…

Six Team A members remain.  They add Kuramochi Asuka and Matsubara Natsumi from Team K.  Five members of Team B come over, most notably Katayama Haruka, Oota Aika.  And four Kenkyuusei get promoted, including one of my faves Iwasa Misaki (Yatta!).  I think what strikes me the most here is the separation of Miichan from her OgiePro partners of Harunyan and Takamina.  And I really want to see what kind of roles Haachan and Lovetan play on this team.  They were stars for Team B.  Will they shine here? 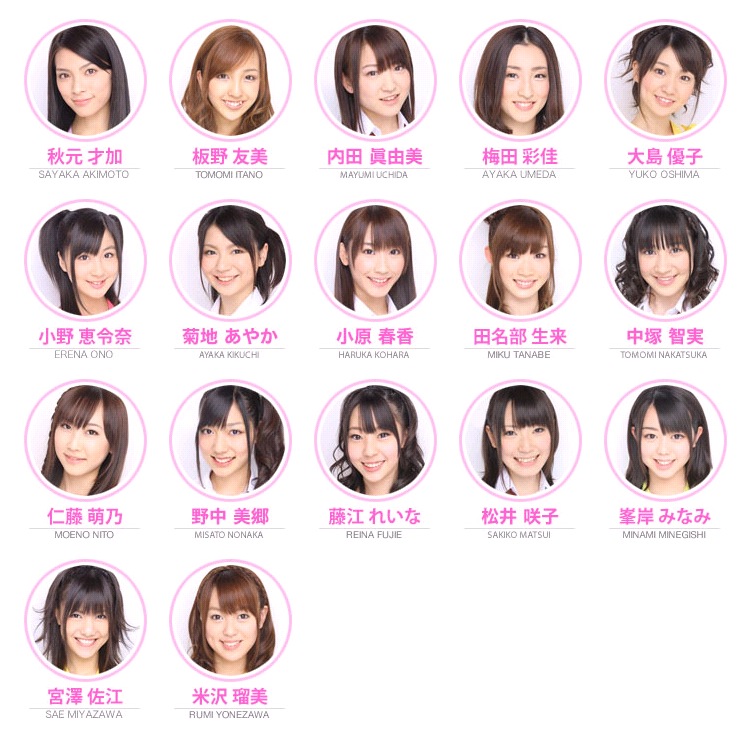 The “front four” of Team K remain.  The inseparable Sae and Sayaka.  Yuko (ofcourse) and Erepyon.  Along with Umeda Ayaka makes five staying in Team K.  Three Team A members added are Miichan, Tomochin and Reinyan.  They get a whole bunch of Team B’ers, including many of my favorites like Moeno, Tanamin and Yonechan.  They also get four Kenkyuusei, including another favorite of mine Uchida Mayumi.  At first glance I kinda like this team.  They keep a significant part of the core of Team K.  They get the most experienced Kenkyuusei in Kikuchi Ayaka.  And I love watching Tanamin and Moeno.  But let me qualify the “liking” part of this.  The news of these changes is fresh, and I am still trying to get my head around it. 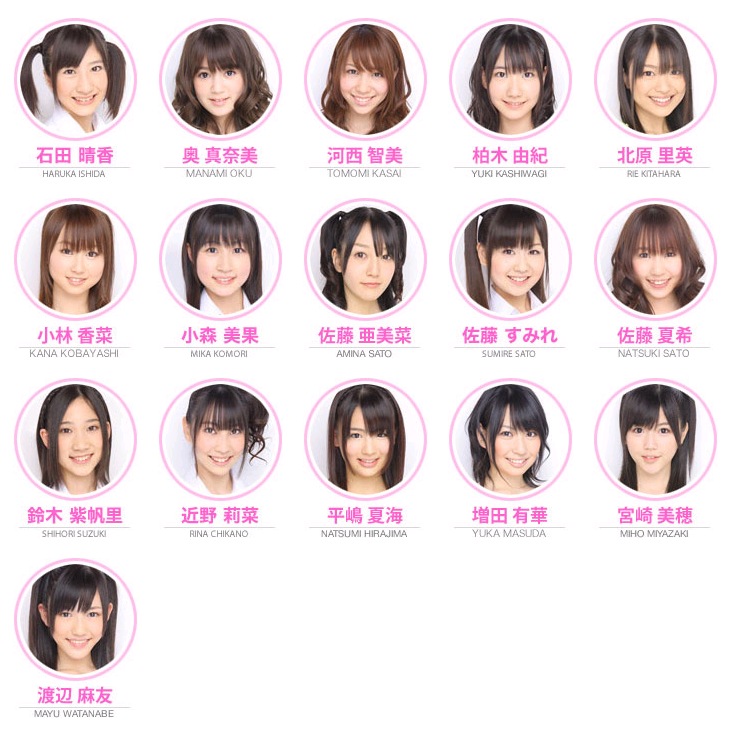 This team gets “blown up” more than the others, with only three members remaining.  They keep two of their front girls in Mayuyu and Yukirin.  And they keep longtime AKBer Hirajima Natsumi.  They get three Team A members in Kitarie, Myao and Sato Amina.  Amina reportedly had to be helped off the stage after the announcement.  Team B also gets SIX members from Team K.  Geez, it’s like Team K basically got split onto Teams K and B!  And the coolest part, the four Kenkyuusei promoted here are some of the best to choose from (IMO)…Sato Sumire, Komori Mika, Suzuki Shihori and (oh yes!!!) Ishida Haruka.

Do you notice anyone missing other than Saeki Mika?  How about the four members of SDN48?  Yukarin, Nonti, CinDy and Meetan will no longer be members of the core teams.  They will instead by full-time members of SDN48.  Now although this is the part that saddens me the most, I think it is the least surprising.  There have rumors for a while now that Sato Yukari could be the next to graduate.  Ohori Megumi and Noro Kayo?  They are about to turn 26.  You knew their days were numbered in AKB.  Urano Kazumi is the third oldest.  I am guessing Mariko gets a bye because she is hugely popular.

But Meetan?  Since she is my number one member I am sad.  I as always I will support her 100% no matter what happens.  Go Meetan!!!

I don’t know what to make of all of this.  On one hand these changes do keep things interesting, and keep AKB as a topic of conversation.  I know the most diehard fans probably hate this, and see the change as doom for AKB.  I think the biggest factor for me is the bonds and friendships of the girls themselves.  They have all worked hard to bond and teammates and more importantly, as friends.  I am sure many of them are hurt because of these announcements.  And they have probably been instructed to keep a good “game face” for the greater good of the organization.

If you are looking for a positive spin on this, then I think you need to look at the girls who didn’t make Senbatsu or Undergirls in the last election.  This is a great chance for some of the less popular members to get a fresh start.  Let’s face it, quite a few members have been floundering in the background of their respective teams.  Here is a new opportunity for them.  As for the promoted Kenkyuusei, this is a great moment for them too.  That is something else to really get excited about.  It’s just sad that their promotion comes at such a controversial moment.

Since I will be in Japan this coming October/November, I guess I will get a great firsthand look at what this will be like.  In the meantime I will keep telling myself to trust the process, trust the girls, trust AkiP…

And in turn they can trust me, I will continue to support the awesomeness that is AKB.

CK in California
(thanks to dudu @ Stage48.net for the pic links)

3 thoughts on “The World of AKB Gets Rocked…”