I wasn’t planning on even listening to this album, much less reviewing it. While Juice=Juice started off strong with songs like “Watashi ga Iu Mae ni Dakishimenakya ne” and “Romance no Tochuu,” their quality took a bit a of a dip (which, frankly, happens to a lot of Hello!Project groups when they get their major debut).

At the same time, though, I like songs that are about a specific group, and I think they are effective in getting you to follow a group. Hearing a song about a group’s struggles like Pioneer makes me want to support them (even if that group is wildly popuar).

This is all a long rambly review to say that I like the fact they sing “Juice=Juice” in the song. It’s a small thing, but it makes this song much more personal to them. Instead of being a generic “let’s work towards our future” song it’s more about “let’s run to our future, us, Juice=Juice.” It’s a very nice touch
Aside from me liking the lyrics and message of this song, I like the musicality of it as well. While the song has a steady beat and is by no means slow, I like how Mirai e Saa Hashiridase builds up in sound throughout the entire song, adding new instrumentation and punctuating the growth with a small drum roll. It could have worked a bit better, as some of the instrumentation does get cut out during the chorus, but for the most part this is great.
Honestly, my biggest complaint is that this isn’t  the last song. This song would work so well as the ending song – the lyrical focus on heading to the future/a new era as Juice=Juice and even the build up works great. But still, that’s a small complaint to have. 9/10
11. Tsuzuiteiku Story
I mean, I get why this is the last song. It has a lot of the thematic elements of the last song, only it’s about a continuing story. I get it. It just feels like H!P had two songs they liked that would work for the last song of the album and went “eh, let’s throw both on there. I think this would have worked a bit better before Mirai e, Saa Hashiridase! but I think that’s more of a matter of personal opinion.
This is not a bad song by any means. I’m not a big ballad person, so this isn’t a song I choose to listen  to on my own very much. It’s very pretty – all the vocals sound great, the strings in the background are great, and the melody is pretty. However, for a ballad to be a song I actively like or listen to it has to do something interesting or be somehow extraordinary in a way. For example, Matsuura Aya’s perfect vocals maker her ballads  work for me, and Momoiro Clover Z’s Hai to Diamond has a great melody and interesting instrumentation. This is purely personal preference though.
There’s a lot to like about Tsuzuiteiku Story, but it’s just not really my thing. At the end of the day, while this is pretty, it doesn’t hit my marks for being an interesting ballad. 7/10
I’m not going to review the third disc of this album as it is all covers. However, I think it’s worth mentioning that all of the songs they chose for this are excellent. Taiyou to Ciscomoon’s Magic of Love is one of the all time great H!P songs, Narihajimeta Koi no Bell is fantastic, as are all the others. I think the choices of songs is very telling – it’s mostly some of the great, classic H!P songs with one newer song thrown in I’m assuming because it’s more disco-y (Narihajimeta). If that’s the vibe they’re going for with this album, they nailed it.
Overall: I did not expect to be blown away by this album. I’ve gotten used to not caring about H!P album releases, and I hadn’t paid that much attention to Juice=Juice in the past. However, after listening to this album I’ve realized that Juice=Juice is trying for some interesting things musically, and focusing on a sound that I personally enjoy a lot. While there are some tracks that are stronger than others (Umaretate no Baby Love for one), this is overall an incredibly solid album that I’ve been listening to regularly. If you tuned out of Juice=Juice at any point I urge you to give this a listen, at least the second disc. It is well worth your time.

Song: This is the most old-school H!P song I’ve heard in a while. This instantly made me think of stuff like Kiiroi Osora de Boom Boom Boom and Gatamekira. As a fan of H!P’s old-school sound (especially of stuff like T&C Bomber/Taiyou to Ciscomoon), this is a great sound that I want more of in H!P. I’ve really enjoyed the releases from Juice=Juice (especially Watashi ga Iu Mae ni Dakishimenakya and Romance no Tochuu) and Ijiwaru Shinaide Dakishimete yo continues with that musical excellence. This does a great job of being consistent with previous releases (it sounds like a Juice=Juice song should sound like) while also being distinct. It’s catchy and fun.

As always, Juice=Juice has some of the best arrangement in H!P. The piano sections in particular stand out. Not quite as much as the saxophone in their first single, mind you, but I don’t think much will. The lovely piano bits are part of a really solid whole, however; the rest of the arrangement is really nice. Occasionally the background vocals sound a bit too loud, but that could be because I want to hear more of Juice=Juice. Tomoko and Sayubee in particular sound great, but the rest of the girls sound very good. So there’s really no need for overwhelming background vocals unlike, say, early Berryz Koubou. The arrangement strikes a good balance; the girls’ voices are rarely overwhelmed but it doesn’t sound empty like some Hello!Project songs are guilty of.

Aside from the mixing issue of making the background vocals a bit too loud (at least to my taste) this is a well-produced song that continues Juice=Juice’s excellent streak of singles.

You can continue putting Ishida Ayumi in everything. I wholeheartedly approve.

Seriously, though, even though pretty much everyone was skeptical about it, Ayumi fits in very well with Juice=Juice.

The situation is still a bit awkward, and I imagine that there was extensive discussion on what to do with Karin’s foot injury. However, I think this ended up being a good choice (it’s hard to imagine only four people doing this dance) and Ayumi fits in really well visually and with her dance skills. My friend Dani pointed out that this is a good case for more shuffles, and I agree. The Satoyama/Satoumi units are fine, but I’d love proper summer shuffles again where all of H!P’s shuffled up.

That said, it is a bit strange seeing Karin in part of the PV and Ayumi in the other. It also doesn’t hurt that this isn’t a very interesting PV. There are two sets of close up shots, occasional group shots and the dance shot. It’s very basic and on a basic set.

I like this a lot in theory. The dark background and the red floor is a cool idea. But the way it was executed makes it look kind of boring and empty. Like they just set up walls and a floor and were like “let’s call it a day!” (which, let’s be real, is probably what they did).

These sets looked a lot cooler, IMO. Some mirrors, some beads on strings, and it already looks cooler. I like how they emphasized the members’ colors with the lighting but made it fairly subtle. Though every time they had Tomoko sing “I am rose-quartz” I swear she gives the camera this look like “yeah I know why they gave me this line.” 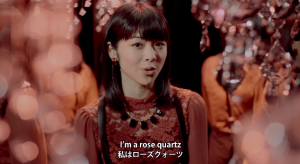 Those sets are well-lit and nice. The rest of the PV’s lighting is not that great. One of the biggest complaints I’ve seen about this PV is that it’s dark looking. My response is that dark isn’t bad; it’s just the same old boring flat lighting that most H!P PVs are lit at. Look at that screencap up there with Tomoko; she has shadow to her face which adds dimension, and there’s a good contrast between her face and the background. It looks nice. Then let’s look at this screencap with Akari. 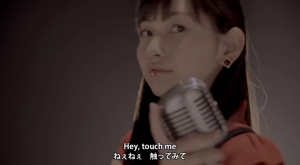 See how little shadow there is on her face? There are tiny amounts of darkness, but for the most part this is completely flat lighting, which means that the light is diffused over the whole thing. Now for the most part you don’t want a ton of shadows unless you want a specific mood (like in The X-Files; some scenes are basically in the dark). However, some shadows add depth, character to a face. Akari’s face here looks like it’s not brightly lit AND it’s super flat, which just makes it look worse.

While a lot of the issues are with the actual lighting setup, they could have done more in the post-production. I took that same screenshot and did a little bit of editing in my freeware photo editor.

I slightly upped the brightness and I raised the contrast. This looks a lot more dynamic than the flat image presented earlier. Of course, the editing on the video would have had to do just that; upping the contrast on a moving image. However, this took me about 10 seconds to do.

There are even scenes where it’s too bright. I know they wanted to do a lens flare type effect or SOMETHING, but seriously, what were they attempting with this? 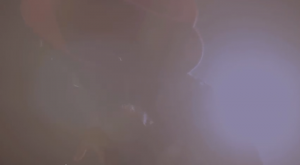 That said, not every shot has awful lighting, so points for that? 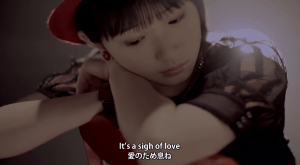 I think this has a lot of potential. I really enjoy the song, the general aesthetic feel of the PV, and the costumes are nice. H!P just didn’t take the time to take this PV further, to make it better. Which is frustrating.

Overall: This is a really nice song, and a decent but extremely flawed PV.