So my goal for today was to review the new Team N stage (which I will end up reviewing for next Monday). However, I had a fairly long day, so I decided to review the new PV by Shiritsu Ebisu Chuugaku. Which I’ve been meaning to review for some time because, spoiler, it’s pretty great.

Song: I’m a sucker for high energy songs. Which is why, even if I’m not necessarily as big on Shiritsu Ebisu Chuugaku as, say, Team Syachihoko, I generally appreciate Ebichu’s music. If you want something high energy, this is a strong bet. The melody is immediately catchy and a total earworm, which works well with the electronic instrumentation the song goes for. I’ve spent a bit of time singing “zukkyun zukkyun” to myself. I really like the sections where the song slows down. This is where the arrangement is at its best and it allows the girls to emote more than they could. Really, though, this entire song is catchy and fun and exactly what you’d want from a song that’s called “Unidentified middle school students X.” It’s wacky and fits well into Ebichu’s discography.

Perhaps this is me being too much of a Hyadain fangirl, but there were parts that made me wish he had a hand in writing this. The Hyadain influences are palpable, especially the occasional drastic tempo changes. Hyadain is a frequent Ebichu collaborator (including the B-Side to this track, ‘I’m your MANAGER!!’) and I wish he would have just arranged this. The arrangement isn’t bad; in fact, I like it most of the time. I enjoy the fairly heavy, almost techno beat in there. The only thing I really wish would change is that I wish there was a bit of a heavier beat and just more to the arrangement in the chorus section, which feels occasionally empty. But, thinking of Hyadain’s work arranging Dempagumi.inc’s Not Bocchi…Natsu, he turned what was already a great song into a fantastic song that’s one of the group’s best. That’s what I feel like he could have done here. Mikakunin is wonderful, and great, but I feel like it just needs one more push to being that group-defining song I feel it could be.

I don’t want to sound like I’m too critical of the song. This is a great song, and definitely worth your time (especially if you enjoy high energy idol pop). However, it’s that type of song that COULD be a group-defining song, and I kind of wish that they had figured it out. That said, while I do think it could improve, this is still a great song. 8/10.

PV: So, uh, I have a bit of an affinity for bad movies. I don’t go out of my way to enjoy them, but let’s just say I’ve seen Birdemic: Shock and Terror multiple times. Willingly. So when I first started to play the PV and there was (poorly done) written text against a “space” backdrop, I knew I was in for a treat. 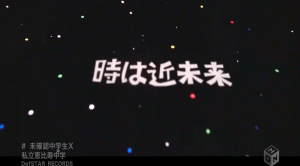 I love all the “effects” in this PV. You can tell they made it poorly on purpose, from everything being clearly made out of cardboard, to the “alien” being a guy with a paper hat and cardboard claws. And the alien is basically just a mantis guy. OK Ebichu, whatever you say. 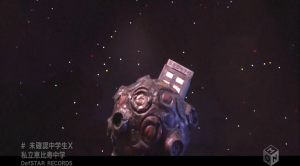 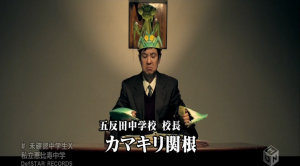 I have to say, on another sidenote about lighting, H!P this is how you do mood lighting. There is a lot of darkness in this early story section, but it’s used for “dramatic” effect. I know that this is meant to be a cheesy scene, but they actually did a good job of making it look interesting. So good job, Ebichu director!

The story itself is understandably silly, but they do a good job of selling it. The best thing they do is that they do what “good” bad movies do, which is take themselves seriously. The most enjoyable bad movies are the ones where the director or whoever else is the main driving force behind the movie takes the project seriously. That’s why movies like The Room and Birdemic are so entertaining. The whole thing is silly, but the actors appear to give it their all, which is nice. 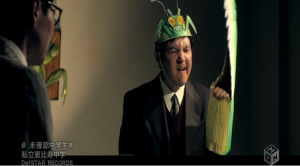 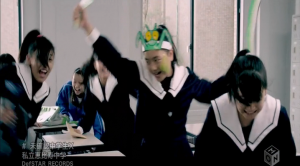 Ebichu themselves don’t get to ham it up as much as the extras, but they have their fun, posing and being the heroes of the story, the Mikakunin Chuugakusei X. Unfortunately, this makes them not quite as memorable as the other actors in the PV (which is a bit of a shame, given that they’re, you know, the stars). They get to make funny faces and face off against the evil mantis people, but they have a lot of shots just hanging out in the library. Which would be fine in most other PVs, but I wish they’d had a bit more interesting things to do to make the group itself stand out in this memorable PV.

The biggest thing that I have to wonder is why half of the dance shot takes place outside. I mean, it doesn’t look BAD, but it doesn’t make too much sense. The other half takes place in the library, which is a solid choice. I just think it would have been interesting to see part of the dance shot take place on the stage where they face off against the mantis people. The lighting is cool, and it makes sense that Ebichu would perform there, since it’s a stage. The dance shot is at its best, though, at the end where they do the dance with all sorts of back dancers. I’m a sucker for that type of thing, and Ebichu does it well. 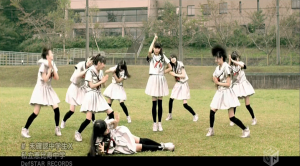 But really, aside from some creative choices that made me scratch my head, this is one of the most entertaining and fun PVs of the year. 9/10.

Overall: Even though I’m nitpicking this a bit, this is really a very strong song and PV, and is very much worth your time.