As always, even though my life has been busy, I need to review Team Syachihoko’s latest effort, this time with their anime movie tie-in single, Tensai Bakabon.

Song:  Honestly, this happens to be my least favorite Team Syachihoko single song to date. Now, before you wonder if I’m jumping ship from my favorite group, I’m not. I actually think this song is pretty enjoyable, especially if you don’t compare it to other Syachi singles, and all the other single songs are so good that this isn’t a bad thing necessarily. This is just a lot weaker than the other single songs. The other thing to keep in mind, that I’m giving Syachi a lot of leeway for, is that this is a cover of a classic anime song that isn’t a very compelling song to begin with. They’re doing this as the theme song for the new Tensai Bakabon movie, so they’re making do with that song.

That being said, I think that the original song isn’t necessarily bad, just uninspiring. I’ve gotten multiple sections of this song stuck in my head (most notably the “bon bon bakabon bakabon bon”) and the melody is fine. The song is pretty repetitive though (each member has a short verse and in between all the verses is the same chorus), which makes the song feel like it should be over a lot sooner than it is.

I also think that the arrangement manages to fit both Syachi and the original song. I like how it starts off fairly normal sounding, but then quickly escalates in weirdness, speed and energy. This song is very Syachi-fied in that sense – any fans worried that Syachi lost weirdness with Shampoo Hat are going to see that with Tensai Bakabon their fears were unfounded.

Well, bonkers Syachi is back.

I’m kind of conflicted about this PV, truth be told. I think a lot of the elements are there but that it could have done better.

The most notable aspect about this PV is the 5000 repeated Syachi members. While I in theory like the scenes featuring all of them, which oddly enough remind me about of the game Katamari Damacy (a Katamari Damacy featuring Syachi would be incredible), I think these scenes are overused. The first couple of uses feel innovative and interesting, but by the end these are the least interesting of the scenes.

This effect is really utilized better in the close up shots each member has, which are a lot of fun. I like the framing of the Syachi members running on the bottom with one Syachi member on top. They also bring in another member on the screen. This is really aesthetically pleasing framing, and is the best shot.

Really, the best aspect of this PV is the members themselves. They all completely give it their all and do a lot to ham it up, which is a ton of fun to watch. Even though this is kind of a so-so PV, Syachi fans should enjoy watching it for member antics.

While the effect of the 5000 members is technically pretty decent (I like the cartoonish look to it) occasionally the green screen looks a little bit off, which is surprising and disappointing given the rest of the PV. There’s occasionally an outline around the members that makes the production look cheaper. It’s kind of nitpicky, but is pretty disappointing. 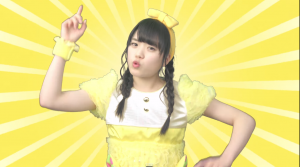 The other notable aspect of this PV is that part of it was filmed in Harajuku outside. I actually really like these few short sections and I’d like more like this. 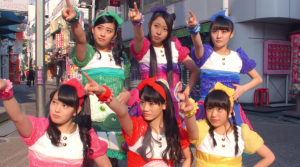 Ultimately though, while there are some elements I enjoy about this PV, I don’t think it was executed as well as it could have been, which is a bit of a disappointment.

Lately Team Syachihoko has been all about America and Hollywood, which makes me, as an American fan who adores Team Syachihoko, wonder a bit about them going to America. Which, you know, would make me ecstatic.

This song is also pretty fantastic, as a film fan, because of the occasional references in there. Yuzuki saying “I’ll be back” gives me the giggles every time I hear this song.

If Tensai Bakabon was a bit disappointing, Ike Ike Hollywood makes up for it in a big way by being endlessly entertaining and fun. At its core is a catchy melody and a really fun song.

The arrangement is fantastic, starting out with what sounds like a film reel. The instrumentation includes a lot of strings, but there’s also a lot of great guitar, brass and pizzicato piano. It all comes together to create a piece that works together but is often all-over the place.

This song is a lot of fun, and what I’ve come to expect from Syachi’s music.

The back and forth of this song is fantastic,as is the fast pace. This song has a ton of energy, which is always fun to listen to. The way the vocals work together to give it all that energy works very well, as well. While being high energy, it also has an almost laidback, mellow feel to it – it’s really hard to explain but it totally works.

There aren’t many songs out there like Twilight, and it has quickly become a favorite song of mine for that.