The new members of S/Mileage, the group that everyone thought would have a stable lineup until Tsunku went “PSYCH!” were just announced. 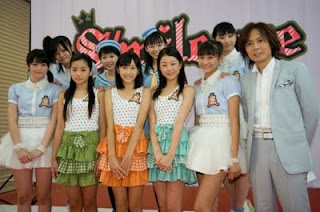 So now we have a new nine member unit of S/Mileage, with new members Katsuta Rina, Takeuchi Akari, Kosuga Fuyuka, Nakanishi Kana and Tamura Meimi. However, there’s a catch; these aren’t full members YET, they’re actually considered sub members. Meaning that they are not actually permanent members yet, and their permanence in the group actually depends on their performance in the new single that’s being released in September and the fall tour, but some of them could be kicked out.

My first thought was honestly a plain and simple “WTF are you doing Tsunku.” This is one thing that has to be AWFUL for the girls to deal with; they’re members, but not yet. If I was one of them, I know I’d be on edge every single second, to make sure I didn’t get kicked out. And while I suppose that’s the plan, it’s kind of an awful thing to do to them, especially since it wasn’t guaranteed. They went into this audition expecting to be members, not submembers. Also, does submembers imply that their participation will be less in the single and tour? If so, they should just be named “Mitsui Aika class” in that they’ll be there, be great, but will not get any attention whatsoever.

I LOVE YOU AIKA DON’T WORRY.
My second thought after seeing this was that it reminded me a bit of the AKB48 kenkyuusei system. If you don’t follow AKB, basically the kenkyuusei are trainee members. To get into AKB nowadays you HAVE to join the kenkyuusei. They have performed their own stages, and the kenkyuusei are the ones who fill in at the theater if one of the members (usually one of the popular ones) isn’t there that day, which can give them great exposure (my favorite kenkyuusei, Natori Wakana, has subbed in for Kashiwagi Yuki, the third most popular AKB member according to the election). However, these members have to reaudition every so often and can be cut. They participate to an extent, but don’t become full members until they’re promoted to a team.

I wonder if this is what Tsunku is trying to get at; getting new members, testing the waters (their abilities to perform as well as their popularity, I imagine). This is a pretty OK idea, I’d say. However, it’s really weird, because Tsunku hasn’t really done this before. Yes, he has the Eggs, but he hasn’t done THAT much with them. These are girls who were told they’d have a chance at S/Mileage, but now they are told they might be cut. That’s nerve-wracking, IMO.

I also think that they’re really trying to test the waters to see which ones become popular and which ones don’t, regardless of vocal/dance ability. I have a bit of a theory that any Japanese girl could become an idol if she wanted to become one, and vocal/dance ability really doesn’t make or break an idol ever .I know that it’s a bit more important in H!P, but I think it’s really overestimated. These girls aren’t singers, they’re idols, so I doubt this testing period has anything to do with singing ability.

However, I’m also a bit wary as a fan. It took me a while to pick a favorite kenkyuusei because I was worried I’d get attached and then she’d leave; however, I was completely charmed by Wakana. This is pretty much the same; how can you expect a fan to become attached, if they’re afraid the girl will be kicked out? And what happens if a girl gets a fanbase (all the H!P girls have one, whether they’re frontgirls or not) and then she gets kicked out? I’d imagine that could seriously alienate some people.

I’m really honestly quite hesitant about this, but it’ll be interesting to see how it works. I’ll be hesitantly following S/Mileage from here on out, trying not to get attached to the new girls.

1 thought on “S/Mileage’s new members… are not real members, but wha?”