So, before this trip I wrote five posts about Momoiro Clover Z and their trajectory, how they kept growing and how my fandom wavered a bit.

Well, my Momoiro Clover Z fandom is back in full force now, maybe even stronger than ever. Even though Momoiro Clover Z’s sales aren’t even close to groups like AKB48, there’s the reason they’re considered the top group in Japan – their live events are considered to be top notch. They regularly sell out the largest venues in Japan with ease, and so, before going to their performance in conjunction with Anime Expo, I knew that I would be in for a treat. Still, I don’t think I knew just how great of an experience I would have.

Day 0 Fan Event
Momoiro Clover Z came to the US in conjunction with Anime Expo, the largest anime convention in the US and one of the largest conventions period in the US. It’s so big of a convention that they even have a “Day 0” for the convention in addition to the four day weekend, and that’s for attendees to pick up their badges for the convention (in previous years attendees had to stand in line for hours to get their badge, but this year it went much faster). To just about everyone’s surprise, there was a fan event announced about two days prior to the convention for Day 0 (which is apparently not something that happens), with the idea that it would teach American fans the fan calls and cheers for the concert while watching a concert DVD. However, just a day before the event it was announced that MomoClo would actually be at the event, so I knew I had to be there.

After waiting a couple of hours in line (A bit unpleasant, since Anime Expo doesn’t really manage lines well), we went in and it was a fantastic event. While some of the concept of teaching fans fan calls and cheers was there, it really became more of a fan meet and greet type of event. MomoClo answered a lot of questions in a Q&A type format (with Sasaki Ayaka being the chattiest of the bunch), which was pretty entertaining. They then proceeded to show us clips from their Nissan Stadium live and have us go through it for the calls. I thought it was kind of funny, though, because they made sure we got the timing right for the jump in Wani to Shampoo and they didn’t perform that live, but they did perform songs that required more fan calls/cheers and dancing. I think ultimately the day 0 event ended up being less about teaching new fans and more of a fan event for existing fans. Which I don’t mind at all.

My super exciting moment came later, though. At one point they were teaching fans the call and response introductions each member does. Below is a very old video showing this (circa 2010) but you get the idea.

They had American fans come up (they specifically asked for non-Japanese fans to do this) and be quizzed on the intros. While I’m definitely not the type to jump up and do something, here I knew I had to. So when they got to my favorite member, Sasaki Ayaka (AKA A-rin) I shot up my hand. I was helped by a friend who was right in front who pointed directly at me, and by Takagi Reni who, after seeing my friend point at me, started to point at me as well (thanks Shioka and Reni, I appreciate it!) which meant A-rin ended up picking me to go up and do it. Which was insane and amazing. 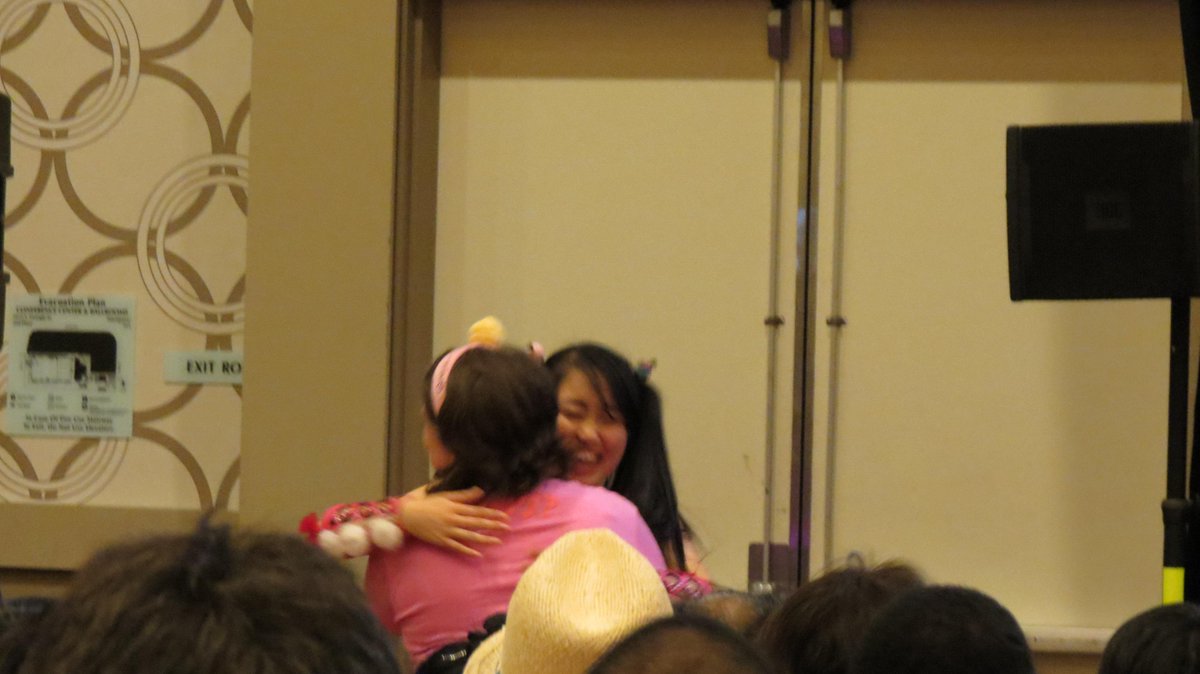 When I was up there she immediately gave me a big hug; getting a hug from one of my favorite idols has been a dream of mine for years, so this was insane. We then proceeded to do her introduction, which had been hyped as being the most difficult (I guess because you need to to know multiple Japanese words?). We did her intro together, she gave me high fives and told me she liked my headband (her 2012 birthday goods that a friend gave me, you know who you are and thank you SO much). 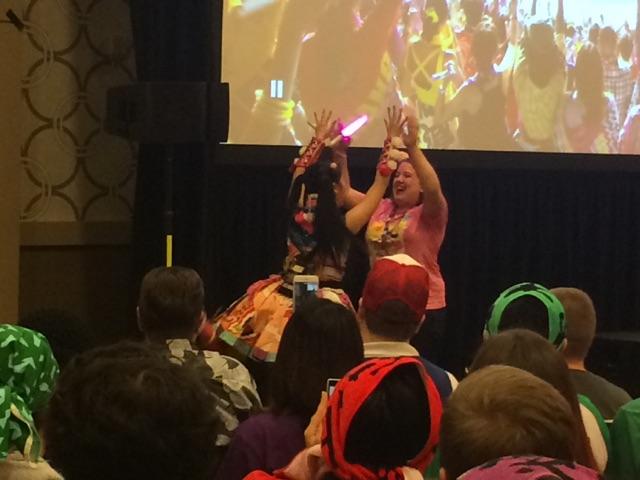 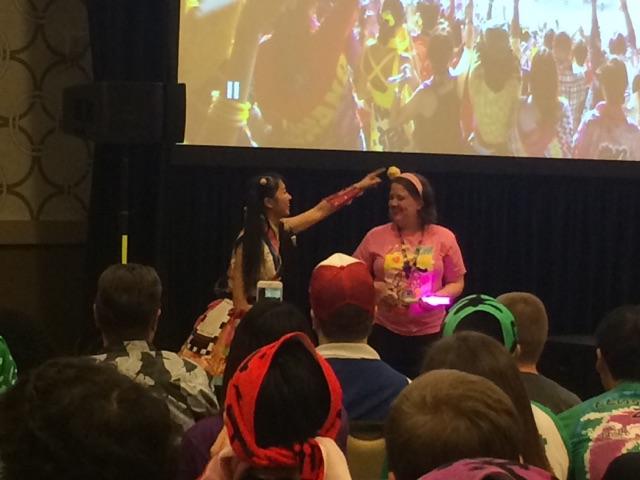 (These and a few other photos courtesy of TheNumber244 whose blog you really should be reading if you aren’t already).

The event continued and, when it ended, we were able to walk out ahead of the members and say thank you. It happened fast (there weren’t handshakes and they even had the people pushing you forward!) but it was still nice to say thank you to the girls. On the way to do that, however, I did see the manager known as kwkm who has become pretty legendary. I said hi and thank you to him by name, and I think he was kind of surprised.

After the event, I got asked to film an interview about my experience at the day 0 event and why I liked idols. Not sure when/if that will come up, but I basically rambled so I hope I don’t look too bad. HOWEVER, at the end of the interview they asked me to do a pose or a dance move or something from something MomoClo. I was trying to think of what I could do and suddenly A-rin showed up next to the camera guy and interviewer (I was focusing on my interview and did not see her come up). I knew what I had to do so I did her catchphrase “A-rin da yo.” She then proceeded to jump in front of me in front of the camera and do “A-rin da yo” 5000 times better than I ever could, and then she gave me more high fives and such before leaving.

Again, not sure if this is going to show up anywhere on video, but it might.

After a day full of waiting to pick up my ticket for the show and picking up merch, the concert finally came and it was honestly amazing. It’s easy to see why Momoiro Clover Z is the live event to see in Japan. 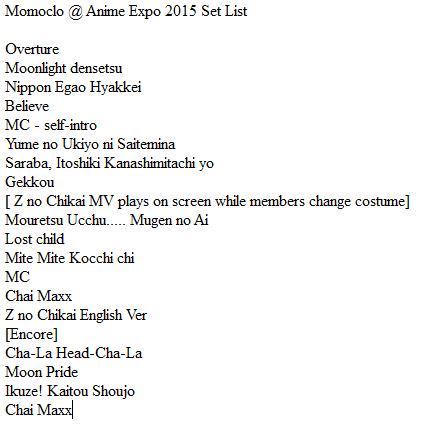 (note that the concert ended at Ikuze! and they didn’t perform Chai Maxx twice, haha).

While they performed mostly anime-related songs, as to be expected, there were still some surprises on the setlist. I wasn’t sure if they would do Nippon Egao Hyakkei, for example, and that was a real treat for me because it’s a particular favorite song of mine. Saraba was fantastic live, as was Mugen no Ai, as was Lost Child (I got serious chills during Lost Child). Really it was all fantastic live.

Chai Maxx was a major surprise for me, and a very welcome one. It’s an older song and one that doesn’t have an anime-tie-in, but it was one of the biggest highlights of the show for me because the crowd always dances along. Chai Maxx was possibly the second most exciting song of the night, and was a ton of fun.

The biggest highlight, though, was seeing Ikuze! Kaitou Shoujo performed live. This was the song that got me into Momoiro Clover and really helped expand my horizons as an idol fan and blogger. It is also, in my opinion, the single best idol song of the current idol boom, so I was absolutely thrilled to see it. It is a song that has a LOT of audience participation that I was excited to be a part of. Not going to lie, halfway through the song I had to start crying because it was such a moving experience for me, to see this song performed live.

Ultimately though, Momoiro Clover Z is known as a group that excels at live performances for a reason. Even if this was a slightly watered down version of their concerts in Japan (a bit shorter, no major setpieces or staging) and even if there are still songs  I want to see performed live, it was probably the best idol concert I’ve seen yet.

As always, the few days I spent in Los Angeles were filled with meeting new people and seeing friends from previous live events. I’ve already gushed about this on Twitter, but a good part of the reason I keep flying out to idol events across the country from me is because there are so many good people in the idol fan community. Being able to spend several days hanging out with friends I’ve met online and at these events makes these trips worth it, in addition to the actual concerts and events. If you have the financial means to go to these events, I really urge you to make it happen.

As a fan, this has spurred me on to continue going to these events, continue being a MomoClo / Stardust fan, and hopefully be able to make a trip to Japan happen in the near future. So hopefully you’ll be reading about me making that trip soon!