You knew this had to be coming, right?

Team Syachihoko put out two EPs this fall – Ii Janai Ka and Ee Janai Ka, which each had five new songs. The first one, Ii Janai Ka, was almost entirely written by Team Syachihoko’s normal songwriter (except for the cover song, JOINT). Ee Janai Ka, on the other hand, features collaborations with other artists and songwriters. As someone who enjoys both Syachi’s standard songwriting and the work they’ve done with other artists, all of this has been pretty exciting. So, what do I think of Ii Janai Ka? For being a Syachihoko song this is a fairly normal sounding one – it’s an upbeat, easily understood guitar-heavy rock song. It’s not doing anything terribly unusual and there isn’t really a trace of the weirdness that usually indicates Syachi songs. Now, that’s not necessarily a bad thing – Shampoo Hat is fairly “normal” and it’s one of Team Syachihoko’s best songs and my personal favorite song of 2014. However, it works because it’s an extraordinarily good “normal” song. Basyauma Rock isn’t a bad song  by any means, but it’s just pretty average. It isn’t weird and it isn’t good in the way Shampoo Hat is good.

That said, Basyauma Rock has a lot of strengths. For one, all the members do a really great job of it. Nao’s vocals in particular have improved and sound great in Basyauma, but both of these EPs do a lot to show just how much Syachi’s members have become better performers. The section midway through the song, “atama sagete kao wo agete” where all the members gradually join in is very nice, too, and the highlight.

I feel like I’m being a little overcritical here. I really do like the song. I just have very high standards for Syachihoko’s music, so something that’s just “good but pretty normal” is a little disappointing. Still, it’s a fun song that’s easy to listen to and I’ve enjoyed a lot. 7/10

So, hot off the heels of calling the track a tad disappointing comes me saying that this is one of the best shot idol PVs I’ve seen in a while. It’s not particularly unusual stuff, but man is it beautifully made.

The framing is just about perfect, done very artfully. Every single frame looks gorgeous, and the cinematographer did a great job of setting it up so no shot looks boring.

The camera is often moving and fluid, especially in the dance shots and closeups, which allows for a lot more dynamic shots. 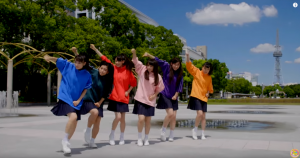 However, the thing I was most impressed with when it comes to the framing is how well it works with the Rule of Thirds. Basically this is a design guideline that asserts that when thinking of a frame you should think of dividing it in nine equal parts, and have important subjects along those lines. So rather than having a subject be centered, that thinking of a frame in thirds/nine parts allows for more dynamic images. And while this is hard to do exactly while filming things (especially if you’re filming moving subjects), quite a bit of Basyauma Rock is filmed along those lines, creating some very visually stunning shots. 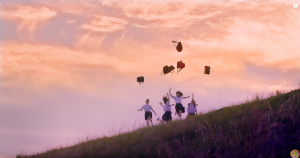 The lighting and color balance are also spectacular – colors pop earlier in the PV, and things become a bit more muted later on in the PV, but it works because the earlier half is supposed to take place in the morning/early afternoon and the second half is more of the late afternoon/evening. Everything is lit artfully and looks wonderful.

Another filming technique is the lighting “magic hour” – this is a short period during sunrise/sunset where everything is still lit but it’s a much redder light. It’s considered a very aesthetically pleasing light, and it’s not around for long so it’s trickier to shoot with. And oh look, Basyauma Rock uses it to great effect. 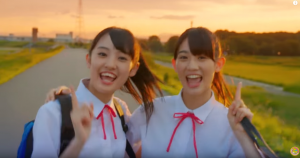 I also like that the lighting at the Syachi Summer concert also is reddish gold – it matches really well, and this connects the concert sections to the rest of the PV aesthetically. 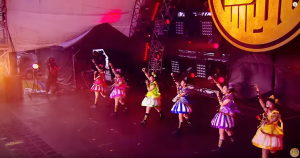 Basyauma Rock is a gorgeous PV and well worth your time. 10/10

Joint is a cover of the song by RIP SLYME – however, it works so well for Syachi that I would have not guessed that to be the case had I not known. The song is mostly rap with a sung chorus that works very well. Before this song Haruna had been mostly in charge of the few rap sections that Syachi has had in the past, however every single member works well in this song and has pretty solid flow. Haruna is the clear forerunner for rap ability, but Ando Yuzu’s verse is very good, too. It’s enough to make me wish that Syachi had more rap songs in their repertoire.

Despite being a cover, the lyrics were arranged very well. The lyrics have been changed to fit them more as a group and it works. Yuzu’s verse in particular has been changed to suit her very well, referring to herself as “Ponsama” and making some references to her unit song “Watashi ga Center.”

For being hip hop there is a real musicality to this song. The arrangement works very nicely to convert this to being an idol focused song. It’s also all over the place and a bit weird, which works perfectly for Team Syachihoko. For being a cover, this feels like it was almost written for Team Syachihoko. 9/10

This song is fantastic and weird. And very addicting – I just had to stop reviewing this because I was getting too into the song. It’s a very disco inspired song, which you know I like, but in addition there’s a big electronic feel to it. It’s almost hard to review this because, as normal Basyauma Rock is, that’s how unusual Nigi2Wonderland is. Which is excellent, as far as I’m concerned.

This is a really fun, funky track that is easy to listen to in its strangeness. It builds up nicely throughout the entire song and has a great pacing to it. It’s an effective electronic dance song. The entire group does a great job performing in it, but the real star is Honoka who repeats “nigi nigi nigi nigi” over and over at certain parts in the song and gets the rap section, which is unusual (usually Haruna gets this) but it works so well here.

This is a very well-produced funky song that I enjoy a lot. I don’t have a lot more to say than that. 8/10

Immediately the first thing you notice in this song is the heavy use of piano, which carries throughout the song, and adds a lot of character to this. The entire arrangement sounds great – Chighuhagu sounds beautiful.

This song has a lot of intensity to it – the piano/strings of the arrangement serve as punctuation between sections of the verses, and there is a lot going on between the vocals, the melody and the contrasting piano/instruments. However, what adds a lot of the intensity are the vocal performances. Syachi proves again that they’re improving vastly vocally. Nao’s solo near the end of the piece is just fantastic.

This is an absolute highlight of the EP. It has great intensity, a great melody, and the arrangement is one of my favorites of the year. This is just a fantastic song. 9/10

OK, ballads don’t do much for me. We all know this. However, as a ballad, Yume no Tochuu does a lot to make me like it. The melody is cute and pleasant to listen to. The arrangement is fantastic as well, constantly moving behind the melody – this adds a lot of vocal interest. There are some interesting sounds to Yume no Tochuu as well – the song starts off with what sounds a bit like a harpsichord, and there is an organ sound to the piece as well.

The biggest thing that makes me dislike ballads is that they can often be a bit boring and frankly lazy – however, Yume no Tochuu is neither of these things. It’s fast-paced and interesting enough to keep me interested, while pretty enough to be an effective ballad. It’s still not my favorite of the EP, but it’s still really nice. 7/10

Overall: While I don’t know if any of these songs would be one of my favorite Team Syachihoko songs, that is a very high bar. Instead, Ii Janai ka is a very solid EP that shows the growth of Team Syachihoko, in both the production of the songs as well as the vocal performance of the members. It is a very good effort, and one that you absolutely should check out.