Long time no see – it’s been a few months. I decided to take an impromptu break from Happy Disco. Originally this was to write more for other projects of mine, but then my laptop broke and I’ve mostly been sitting around, not writing. That said, there’s nothing to break me from my writing rut like an idol concert, and what a concert!

Last year I was lucky enough to see one of my top idol groups of all time, Momoiro Clover Z, at Anime Expo. To say I had a great time is understatement of the century. My post is here. The thing that stuck with me, that lasted, was the fact that seeing Momoiro Clover Z live felt more like a beginning than an ending, which is an odd feeling for seeing a group I had been a fan of for five years at that point. When I saw Morning Musume ’14 in New York in 2014, while I still follow the group, it felt like an ending, a culmination of years of being a fan. When I saw Momoiro Clover Z, I knew I wasn’t done with them yet.

So, when Momoiro Clover Z announced they were coming back to the US for a three stop tour, I knew almost immediately I had to go. I picked New York as my stop of choice – while both Los Angeles and New York are about the same distance form where I live in the Midwest, I personally just like New York better and the concert on Saturday was a little easier for me.

While I saw online that people were lining up as early as 8 PM the night before (a 24 hour wait for the concert), I was busy seeing another Broadway show at 8 PM (Natasha, Pierre and the Great Comet of 1812), so I ended up getting to the line at about 10:00 AM, about six and a half hours before the doors were set to open. Luckily, I was able to stand near some friends, old and new, people I’ve seen at various idol shows before, people I met in person for the first time but knew from Twitter, and people I met for the first time but hung out with in line. If you’re thinking about going to an idol show but are worried about the line being too long or boring, don’t worry at all – idol crowds are really fun groups of people to hang out with. In all the lining up and waiting I’ve done for my idol shows, I’ve always had a very good time.

This year, Momoiro Clover Z fans outdid other crowds, I have to say. While all the idol fans I’ve met have been very nice, MomoClo fans were almost absurdly nice. There were multiple presents being made for the group (a banner with signatures on it and a small book with messages to individual members), everyone was sharing food, and everyone was passing around presents. American fans and Japanese fans gave me an almost absurd number of presents. One fan (another Aarin fan from Japan) gave me an Aarin towel. One fan (yet another Aarin fan!) remembered me from Anime Expo and gave me a Yuzuki towel – he remembered me and the fact I also liked Team Syachihoko’s Yuzuki. I was given photos, prints of illustrations, stickers, and it was almost overwhelming. Thank you to everyone who thought of me or gave me a present, or spoke to me while waiting for the show. I had an amazing time. I also spoke with some fans before the concert started, and other fans helped me find a good spot to see. I am almost overwhelmed by how kind everyone was, and it made me very happy to go to this.

The VIP event was split into two major parts – the first part was focusing on the history of the group, where they showed everyone pictures of the group when they were younger, and talking about the group when it first started. While a lot of this was pretty old knowledge, what made it fun was MomoClo commenting on it. They spoke so quickly that the translator could barely keep up, which meant I had to stretch my limited Japanese skills to understand.

Then the group’s long-term manager, kwkm, picked a foreign fan from the crowd for each member of the group to get on stage and do the overture chants together. While I wasn’t chosen, all the foreign fans stood up front for this. It was a very sweet moment to see the members meet and be close to their fans.

After this was the second big part, which was taking group photos. They got a group together of about 75-ish fans together to take the photo, getting everyone on stage. I was very lucky to manage to be in the front row, in the middle of Shiori and Reni, who immediately commented on my creampuff headband (member goods for Aarin). Aarin noticed me and reached over to give me a high five, which was really nice. Everyone did the MomoClo Z pose, and while we were walking out we got to walk over and say hi to the members. I thanked Aarin (my friend said it looked like she remembered me from last year, though I’m not sure if that’s the case!) and thanked the other members as well. 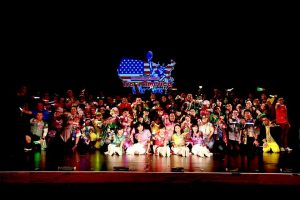 ^ the photo with me in it! I’m right in between Shiori (yellow) and Reni (purple).

As I mentioned before, fans were nice enough to help me get a good spot for the show, so I managed to get a spot front row and to the right, which is pretty unbelievable. This meant that I got to be very close to everything going on.

The concert felt like MomoClo trying to bring the elements of their big shows from Japan to the US. While they can’t bring all of their setpieces, a full live band, a choir, or all of that, they brought two traditional Japanese dancers and a taiko drummer with them, who performed in between songs. The theme of the show was the four seasons, so all the songs were meant to fit somewhere in there. While most of the songs were a little vague as to how they it with the theme, they fit in the obvious choices, which were some of my favorites.

The two highest impact songs were, strangely enough, their Christmas song (Santa-san) and their latest single, The Golden History. Both were really fun to chant to, and were really high energy songs. I have to admit, I cheered VERY loudly when Santa-san came on. The fact that they did both Ikuze Kaitou Shoujo and Hashire made me very happy, as that’s the single that made me a fan of the group.

The only issue I have with this setlist (and last year’s) was the fact that they tend to perform a LOT of anime songs – this year, even though they weren’t coming with a convention, they did both Moon Pride and Moonlight Densetsu as well as Z no Chikai and Cha-La Head-Cha-La (not to mention Nippon Egao Hyakkei). I like all of these songs just fine – I consider Nippon Egao Hyakkei to be one of my favorites. I just wish there was more variety – most MomoClo fans I know didn’t come to the group from anime, but are idol fans historically. I understand they don’t want to disappoint their American fans who might know them because of anime, but maybe just stick to Moon Pride and Z no Chikai. That said, the group performing Moonlight Densetsu dressed in Sailor Moon costumes was pretty fantastic.

Overall, while I liked the show a lot last year, the atmosphere was totally different, seeing it surrounded by fans who knew the group rather than a lot of fans who were there because of the convention. The setlist was better, and had a lot of more obscure songs that I was really happy to see live. I wish there were a couple more songs from Amaranthus and Hakkin no Yoake (Mahalo Vacation is not enough!) but I was really glad to see so many album songs show up here. Seeing Ano Sora e Mukatte, one of their earliest songs, was incredible and emotional.

The group mentioned that they plan on coming back on another tour, and I really hope they do – I know I’ll fly out to wherever they go in the US. Even though I’ve seen Momoiro Clover Z twice at this point, I’m not done yet!