(Note: Read from the beginning of the series on, esp. the intro to this series of posts)

Here’s probably going to be the most fun post in this “What I Like About My Idols” series of magic and joy because I’ll be posting pictures and video links. Mainly video links, really.

But last time I told you that while I don’t care about the vocal skills of my idols, the songs are really the jumping point I have of a group (I kind of didn’t, but that’s what I meant). Vocal ability and songs might be what initially get me into a group, but PV appearances are really the jumping point of getting me into idols. If I hear a voice I can’t associate that with a person; I might go “Oh, pretty voice,” but that doesn’t make me take notice of that person.

However, a good appearance in a PV can really make me take interest in a specific idol. My strongest example that I have is how I became a fan of Berryz Koubou’s Tokunaga Chinami. Many people don’t know this, but the first H!P girl I liked and the first favorite in Berryz Koubou I had was Tsugunaga Momoko (yes. it’s true.). I suffer from terrible “I think my favorite is the first girl I really notice”itis, to the point where, when I get into a group, I have to think “OK, my preliminary favorite is her” but I know it isn’t going to last. Momoko was the main girl in the first H!P PV I saw, Gag 100Kaibun Aishite Kudasai, so I thought she was the best. But yes, I thought Momoko was my favorite in Berryz and that she was better than anyone.

That’s right, Berryz’s Dschinghis Khan PV. Back then I was still a new H!P fan, and this was right around when I started actually following releases. I was watching this PV, thinking that I liked Momoko, but then… 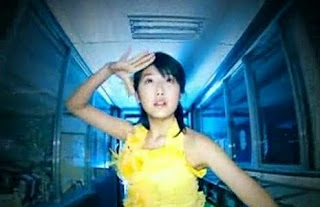 I must go deliver my cuteness upon the world!

I noticed one girl, Chinami. Before that Chinami had never really stood out to me; I thought her “No Nyu~” in Gag 100Kaibun was cute and I didn’t mind her, but I was way too focused on Momoko to really care about anyone else. It was when I saw the energy and fun that Chii provided to Dschinghis Khan and Yuke Yuke Monkey Dance in particular (though she really does bring this to every PV she’s a part of) that I took notice, started looking up more things of her, and she became one of my favorite girls from H!P and my (now second) favorite H!P Kid. And while I’m now really into C-ute and Maimi, Chinami’s appeal in PVs has never gone away, and to this day if I ever need something to cheer me up I watch something like Chinami’s solo PV for Yuke Yuke Monkey Dance.


And while for me, Chinami’s presence in PVs is certainly one of the most marked switch of favorites, almost all of my current favorites made me notice them with their presence in PVs, if it wasn’t the first thing I noticed about them. I noticed Ayaya’s cute/fun nature in her PV to “Ne~e”, I noticed Rika a lot in the PVs to v-u-den (though I went back to her other PVs and noticed her there). PVs are often the first time I see an idol, and thus it’s really the first time I will notice them. PVs really distinguish the girls, and so how a girl does in a PV is very important to me, and I imagine to a lot of JPop/idol fans.

1 thought on “What I Like About My Idols II: Presence in PVs”