Hey guys who read Happy Disco; sorry for the LOOONG time where I didn’t write. I currently have one blog post that’s taking me forever and a day to write (my contest winner post, which is a really great topic but just a bit time consuming), but I’ve neglected Happy Disco. I am sorry. I’m currently balancing being a full time Film/Media Studies student while working two part time jobs (30 hours of work total). By the end of my day I kind of just want to play tetris and not write a blog about what I write in class. But I still love idols/Happy Disco.

Anyways, a while ago I wrote a blog entry for Intl Wota for the Summer Refreshment Program, writing about idols and summer. In case you haven’t seen it, HERE it is. One of the things I talked about was how AKB48 tends to go on a yearly schedule, with spring/graduation songs in the spring, happy summer songs in the summer, and other stuff year round. It’s a schedule that I think has worked for them, because they deliver something that’s expected while simultaneously giving new songs. It’s a good system.

Fall’s here and soon it will be winter. While there’s definitely a feel for winter in terms of tone and style, I never really think of any specific fall style. This tends to be when AKB in particular releases stuff that doesn’t really fit in the season, such as Beginner, RIVER, and the soon to be released Kaze wa Fuiteiru. For a long time, when considering seasons and idols, I always thought that fall was like the free space on a Bingo sheet, that it didn’t matter what you released as long as you released something.

For those who aren’t aware, this is the upcoming collaboration single that Berryz Koubou and C-ute are doing together. This is a great idea for many fans.

But the concept of the song/PV are not great ideas.

Hear me out. I’m not talking about the song/PV. I think the song’s pretty boring, myself, and while the PV could be better I think that it’s pretty good considering that these are H!P PVs we’re talking about. No, I’m just going to talk about the concept.

The song/PV is focusing on a spring/graduation theme. In November. Now, admittedly, I don’t know the full translation to the song; my Japanese isn’t good enough to pick it up on just a couple of listens. For all I know there could be a line in there about how it’s about their boyfriend and how their blooming love is like the blooming sakura blossoms in Spring. Even if that was the case, the song is still about blooming cherry blossoms and the bittersweet spring. That’s what the title says, and even if the lyrics subvert it then the first listen or two will be thinking about spring. In fall.

Even if the song absolutely had nothing to do with spring, then the PV is all about graduations. They get a diploma. It’s a graduation PV, which happens in the spring.

Now throughout all of this I just have to wonder why. Why did UFA choose to do this? Was the song/PV too good of an idea to wait? It’s just a pretty standard thing. The song/PV aren’t special, and even if they realized “guys, I want to do a graduation song” why couldn’t they have done it in the spring, when those songs/PVs are actually marketable? In my other post I wrote:

” if AKB48 were to go “Christmas in July, we’re going to dance around dressed as Santa!” it would probably end up selling a good deal of copies to hardcore fans. However, that’s probably not going to grab the casual listener, unless the casual listener likes that kind of silliness. ”

I stand by that AKB could probably pull it off because it’s AKB. However, Berryz Koubou and C-ute aren’t AKB48, and their sales are in general dropping. The last thing they want to do is lose fans, and what they desperately want is to gain fans, but I don’t see how this song/PV could attract casual listeners to become Berryz or C-ute fans.

Like I said, my big question is why. If they wanted to capitalize on the seasons, why couldn’t they wait a bit longer, or do a holiday-themed song/PV in vein of Aitai Lonely Christmas. I’m honestly baffled at the decision making skills here, and like I said, clearly Tsunku (and UFA) doesn’t read Happy Disco. I just really can’t see why this was considered to be a good idea on a sales standpoint.

You might be going “ah, Serenyty, stop with the sales already, they don’t care about sales.” If that’s true, then why do a graduation song now? What artistic goal are they trying to achieve by this? I’m really wondering, what would make this happen?

So therefore, I just have no idea why Berryz and C-ute are doing this, and I know others are confused too. Confusing and potentially alienating an audience is the thing they have to think about, and they might just be close to doing that.

On a separate note I saw the Mobekimasu song/PV and it’s alright. The main things I got from it are that I absolutely love the dresses they’re wearing, and that Maimi is really really adorable. 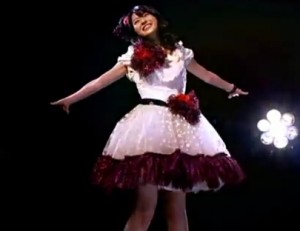