Recently, many pictures and allegations have appeared of AKB48 member, Team K’s Akimoto Sayaka (22) spending the night with Hiroi Ouji (56), or at least him staying over at her house and leaving in the morning. 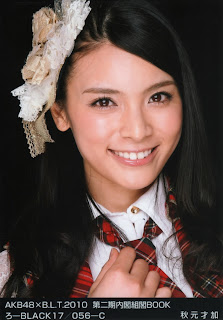 The main problem here actually isn’t so much about Sayaka having a man stay the night, even though he is much older than her, more extreme than Kago Ai’s relationship with an older man (in his 30s); it’s that Hiroi Ouji produced the AKB musical (that Sayaka was one of the leads for) and he also wrote a musical this year that Sayaka was in; this is making people wonder if Sayaka got these parts legitimately.

This has caused Sayaka to step down from her position as Team K’s leader, even though she’s still going to be a member of AKB48’s team K.

The one thing I’ve noticed is that this is bringing up all the questions that come up with scandals; is the dating rule fair? Should an idol’s personal life be kept to herself? Are they REALLY just “Playing Playstation?” (though Sayaka and the producer claimed that they were doing work related discussions and he just fell asleep. Needed the Nacchi reference.)

I really think that fans of Sayaka shouldn’t be complaining all that much; I don’t think that being a leader is as big of a deal as the title sounds like, and she’s not leaving AKB48; she just doesn’t have this position anymore. As far as the dating rule goes, I honestly don’t mind it all that much. Sure, it’s a little much; however, since both male and female idols have this rule AND it’s pretty standard, so idols know what they’re getting into when they get into the business, I feel it’s pretty valid. I love to sing, perform and if the chance came up I’d take a chance and become an idol, knowing the restrictions.

I don’t know if I necessarily believe Sayaka’s story or not; it feels rather suspicious. Still, from what I can tell AKB48 treated this well and I don’t think that fans of Sayaka have much to worry about.