((on a side note, I just learned the grammatical reasons for Ikou. Yeah. Be jealous of my Japanese knowledge))

Speaking of Japanese knowledge, what does Genkimono de Ikou! mean? Why, I’ll tell you! It’s “Let’s go with Energetic Things!” Basically, it’s “yay energy.” Which is why it baffles me that they got Mano Erina of all people to do this song in particular and to get the budget her PV must have gotten, considering they hired a legitimate director and everything. 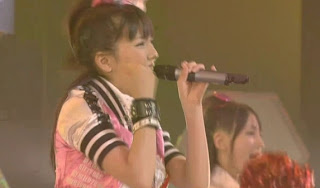 The vocals are fine for this performance. She has a few pitch issues, but she’s not horrendous, and never sounds too out of breath. However, man, the energy level was low. That’s why I made the point about the title. The song is LITERALLY about energy; the title is rather energetic. So why are you performing this like it’s “let’s go with slightly unenthusiastic things!”?

I’ve never been a huge proponent of H!P needing super strong vocalists. Hell, plenty of my favorites aren’t that great of vocalists, I know that. I think that as a soloist Mano Erina should be stronger than she is now, but she’s not super terrible or anything and that in itself is good. However, if there’s one thing that should not be missing from a lot of H!P songs it’s energy. They don’t always require amazing vocals (though some do; I’m looking at you, Ayaya), but they do require their performer to have the right level of energy and ManoEri just did NOT deliver the genki for this performance.

They also need to start training her on stage presence; I like her well enough as an idol, but man if you ALWAYS need four background dancers to fill the stage and you’re a soloist, then that’s a problem.

I don’t need THAT much from an idol. But come on. It’s the title of the song; energy should be a given. 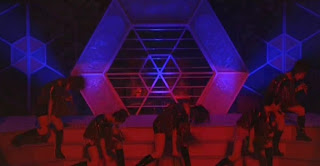 In all seriousness, THIS is what I’m talking about when I’m talking about energy and what I need from idols. None of the girls here have perfect vocals; not even Airi or Chisato. I’d say that no one here is bad and that they’re all very good in their own right, but it’s not the greatest vocals ever. Why? Because they’re giving it all they’ve got into the dancing and the energy of the song, and so their singing skills suffer just a little.

The dancing here is INTENSE; I swear, these girls gave it their all and I’m beyond impressed. Lately I’ve been really into C-ute, mostly in thanks to my friend Dani who adores Nakky. This is the type of performance that confirms the reasoning behind liking them so much as of late. The energy here is intense. 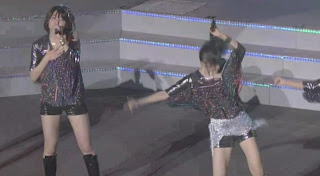 Maimiiiii <333 and fierce!Airirin
I even like this performance better than in the PV; all the girls are performing their best, they all look very much into it. This is one of those performances that is super fun to watch and that I just have to love. At this point in the concert, only four songs in, I’m just thinking that this is the song and group to live up to.