Sorry to all you Berryz Koubou fans out there: Berryz may have gotten me into H!P, but as of recent times I just don’t follow them all that much. At all. They have lost a lot of spark that they might have had with me. In fact, when watching concert performances of Berryz for something like a review I have a little game I play, but I’ll explain that later.

Maji Bomber is a pretty good song; I wouldn’t consider it that interesting, but it’s pretty catchy and is a good song for a lot of the people involved. It’s a song where pretty much every Berryz memeber gets a solo and sounds great. Vocally, this performance isn’t bad at all. Some members sound better than others, but otherwise they all sound nice when singing it.

However, this is another issue of energy; they perform it well but not great. I don’t watch the performance and go “man that was better than in the PV!” or “oh man, that was epic;” it just feels standard. It was a solid performance, but nothing memorable. 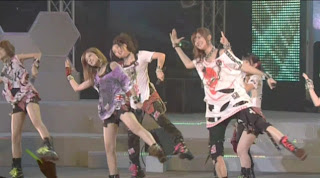 Like, looking back I’d remember S/Mileage and C-ute’s performances as being particularly energetic and thus I’d feel positively towards the group. Conversely, nothing about this performance was particularly memorable; it was just. Good. Except…

When I watch a performance of Berryz I ALWAYS watch for Miyabi. Now you might be wondering why. Miya’s not my favorite Berryz member (that’s Chinami), but ever since I saw the performance of Nigiyaka na Fuyu with the fish costumes I realized that Miyabi never really looks super enthusiastic on stage. I have nothing against her as a person, but I just observed her lack of interest. So therefore, I have dubbed her face of “why am I doing thiiis?” to be “Miyabi Face” and now looking for evidence of Miyabi Face is my game. 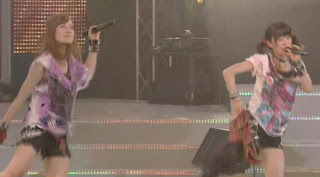 Like here, sort of. Not my best.
If there’s any point I want to make here is that I don’t find Berryz that interesting anymore. There weren’t any glaring things wrong with this performance, but it really didn’t hold interest for me.
Seishun Collection
Now here’s professionalism! Performing a fairly dull song with fairly dull choreography with ugly costumes, all of them look at least somewhat happy to be there. No Miyabi faces to be found!
Seriously, I really am not the biggest fan of this single to begin with. Now, I DO think it’s a move in a better direction. It’s upbeat and happy, which I honestly think is what the Japanese music market is looking for at the moment with AKB48. Unfortunately. This happened. Well, Onna to Otoko no Lullaby Game looks to be better. 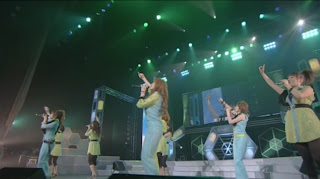 Other than that I don’t have too much to say. It’s a nice performance, with all of them doing a good job, but no one doing particularly well. They all seem to be enjoying themselves and giving it their all; granted this isn’t saying THAT much, considering there’s not much to give when it comes to this song, but hey, I’ll take what I can get.