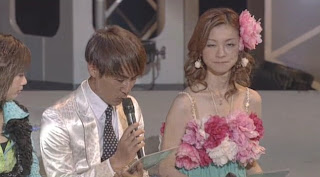 O hai thar, Yossy. I keep forgetting you’re in this concert as the sole shining representative of the amazingness that was the Elder Club. Next time bring Rika with you. We can jam.
This whole MC was basically Momoko going “LOOK AT ME I’M A LEADER OF MULTIPLE GROUPS OOOOOOOOH” and everyone else not caring. She’s being a little too attention-whorish for my tastes here.
Aisu Kuriimu to My Purin
Can I just skip this? Please? PLEASE. No? Gah.
Zoku. I just don’t like them. It’s nothing against the members; I just think that they are honestly the antithesis of what v-u-den WAS; in fact, no one in current H!P is fit. H!P is about youngness, youth. v-u-den was about women starting adulthood and that’s part of why I find them interesting and that they’re tied with Gatas for my favorite H!P group. I’ve ranted about this before, it shouldn’t be tough to find on the Disco.
Anyways, this performance keeps confirming what I originally thought about Zoku in my Zoku rant (in which I stated I would NEVER call them Zoku v-u-den. OK, yeah. don’t want to get into this. I like the members, but they don’t represent v-u-den’s v-u-denness.
This was actually less offensive to me than Koisuru Angel Heart, but JUST BARELY. This song is not something to be taken seriously, but at the same time is actually supposed to be sexy. Playfully sexy, sexy in a “look at how silly fanservice can be!” kind of way, but nonetheless sexy. The impression I’ve always gotten from the Aisu PV is “haha, fanservice is ridiculous” but it’s still pretty hot.
The dancing was not TOO bad, but it had some iffy bits; the kickline was uber fail, and no one was really a good dancer. It felt slightly unrehearsed, and, my main complaint about the group as a whole, like they really didn’t try. 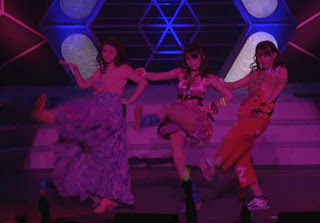 JunJun, you’re doing it wrong.
Speaking of not trying too hard; I understand that Zoku’s only doing one song and that they all have other things to do. But seriously. The costumes? What are they supposed to be? I mean, even if they had to use them for the main groups. Why are the main groups using those costumes?
Vocals weren’t too bad; Risako was really the best one there and I was happy that she got Rika’s long solo near the end. I wasn’t expecting amazingness from them, so.
I don’t mean to sound mean; a LOT of this is my bias speaking. But say what you want about the original v-u-den, but their performance skills (not vocal, performance) were out of this world, and Zoku doesn’t come close to representing the original group I love so much. They honestly feel a tiny bit like a REALLY good cover group of the original, but certainly NOT the revival. So really, it’s my bias as a v-u-den enthusiast, but in my opinion the revival groups are that; trying to be the original group as best as they can. And this really wasn’t that bad of a cover, but when it comes down to representing what v-u-den was I can’t give Zoku the thumbs up.
Oh, and Momoko attention whores. I know a lot of people found Momoko getting up and dancing cute, but I honestly thought it was pretty disrespectful (my GOD this review is going to get me flames). I liked her a lot before, but man I don’t know now. I just really thought it was rude, no matter how I felt about the actual performance going on. I mean, I don’t mind people going for attention, but IMO this was not the place to do it.
Also, I was hoping to see Yossy rocking out in the back (she’s notorious for LOVING this song), but that didn’t happen. Perhaps she needed Rika to be there.
Daite Yo! Please Go On!
Am I the only one that finds it awkward when solo songs become group ones? I don’t know, maybe I am. But the one thing that I keep focusing on here is just how it is of a group song. It MIGHT have been done another time, but the one memorable time that Daite yo! was used as a group song was for Goto Maki’s Captain Kouen concert, which was Gocchin, Tsuji Nozomi and v-u-den. It was really more of a solo song for Maki, but with the other four sang with the chorus.
Also, there was a dance solo section before the rap. Speaking of, that would have been REALLY cool for High King. If High-King is excellent at one thing it’s dancing; in fact, I think that was the main theory for the group? I could be wrong. Anyways, while the girls ARE rather fierce here, I only wish that there had been a better arrangement of some kind to better feature their dancing. 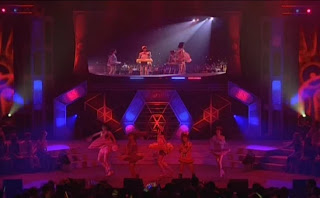 However, despite preferring a more imaginative arrangement other than just the song sung by five people, I really like this performance. I can really tell why it was that these five girls were chosen; their dancing was all spot on and excellent to watch, and all of them seemed to be giving it their all. The singing, to be perfectly honest, was nothing special. To be frank, Goto Maki was much better than Aichan was here, and the others never wowed me. 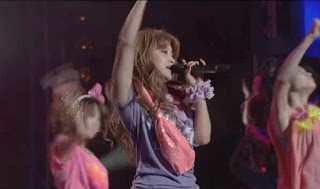 Though she IS fierce here
However, it was the dancing and the energy of this performance that made it really entertaining to watch. The five performers were all really excellent at performing, and it was so high energy that it made me forget the low energy-ness of Aisu Kuriimu. High-King’s never been my favorite unit ever (I love Maimi but I don’t really care that much about the others), but they really impressed me here.