I’ve been a bad reviewer. Now where was I.

MC3
Featuring S/Mileage! I hear a surprising amount of shouts for “AYACHO” when she’s one of the least popular members of S/Mileage. They introduce their next single, which I affectionately refer to as “Onaji something something Bijin Mama”. Or “something something pretty mom.”  Yuukarin has an interesting button on: 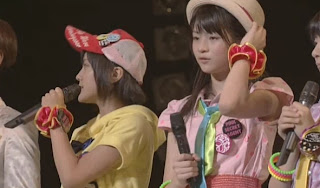 To tell us that she’s apparently a Pink Secret Agent. Saki talks about the concept of the song, which is that their friend’s mom is their rival in love. I swear, I get a weird vibe from this song, but it’s catchy and cute so I ignore it.
The girls also seem kind of intimidated by Yossy, who’s not as funny as she normally is. Especially in that weird/ugly dress.
The one that I think stood out the most was Saki; she got a big laugh from the audience, and did a lot of talking. Yuuka was super cute, so she’s fun. I was a bit disappointed, because I like all of them, but Kanon didn’t talk all that much, and my favorite, Wada, didn’t speak all that much. But when Ayacho DID say one thing near the end that made the audience AND other H!P members laugh and cheer. Man, this is when I wish my Japanese was better, because Ayaka’s pretty hilarious from what I do understand. Otherwise, it wasn’t that interesting.
Chu! Natsu Party
Another favorite of mine! Despite my complaints about the covers of songs earlier, this is probably the best cover song so far. S/Mileage performs it with a lot of really nice energy, using mic stands. 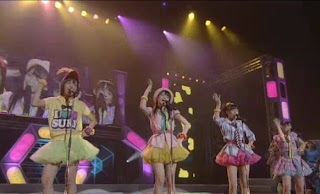 In my opinion this is one of the better performances of the concert thus far. All the girls give the song appropriate energy, and while the vocals aren’t their best (for some reason, I keep thinking that Yuuka isn’t doing as well as she should..?), the performance aspects of the performance more than make up for it. Occasionally the energy level dropped a little, but that was during things like when they were singing and I don’t think it could have gotten much better. All four of them look excited and happy to be singing this classic H!P song, so all in all I really enjoy this performance.
Oh, I forgot to mention; this is the Fankora section of the concert now, so it’s the rotating songs that the “fans chose.” Now I put that in quotations because while IIRC the last song performed by each group/ManoEri was their most requested, we don’t know how often the other songs were requested. So while it’s really nice that these groups are doing older songs, how were the not-most popular songs chosen? Just curious. (BTW, they never performed my choice, I&YOU&I&YOU&I, a 2nd gen Tanpopo song. S/Mileage DID perform 2nd gen Tanpopo, but it wasn’t recorded).
That reminds me again; why WEREN’T there multiple DVD releases? This just doesn’t make sense to me. Instead of just releasing one concert, why not release them all, or find a way to make it so people can see everything. H!P’s not super popular anymore, but concert tickets aren’t cheap and you don’t know the setlist until you get in. What if you REALLY want to see a certain performance? I was sure that they’d monetize on the multiple setlist aspect of Fankora. H!P, I don’t get you sometimes.
Anyways. Chu! Natsu Party was adorable, good energy, and I REALLY like the dynamic that S/Mileage has going on. They’re one of the two H!P groups that has the best group dynamic, IMO.
aMa no Jaku
OK. So basically, even though Chu! Natsu Party is a better song, this was a better performance. Take the C!NP performance, and add better/more in-time dancing, better vocals and even more energy.
S/Mileage really seems like they’re in their element; they’ve practiced this song/dance like crazy since their Indies debut, and it really shows. They work together well, and I think this is the point where they totally deserve this group of theirs. 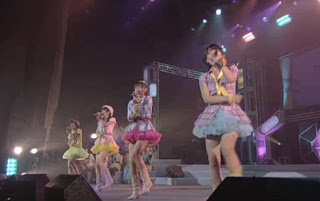 For being H!P’s newest act, I’d say that they brought their A-game. So far, S/Mileage’s performances have been some of the most fun and enjoyable, and they really show how they fully deserved being moved up to a major label. None of the members in particular stand out as being particularly good at singing (though, even though I’m a fan, I’ll be the first to admit that Ayaka’s the worst singer), or particularly good at dancing, but this works. They feel like equals, and you can really tell that they’ve bonded as a group, which is a bit surprising considering how new they are.
Consensus: S/Mileage can improve, but they’re being really great right now! Keep up the good work, S/Mileage!!