Now we’re at the Mano Erina section. Oh ff. She’s doing Ayaya.
Don’t get me wrong, I don’t mind ManoEri. I kind of like her, and she seems like a fine girl. However, why do they do this to us? I get that the whole point of the Fankora concert is that fans get to help pick songs that they want to hear again, but Mano Erina is no Matsuura Aya and whenever they have her perform these songs it’s a HUGE reminder. 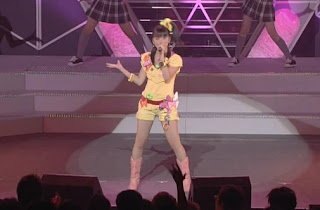 Now this doesn’t make ManoEri bad, persay, that just makes her NOT Ayaya, who was one of the highest selling and most beloved H!P acts of all time. Ayaya was also one of the best singers and performers of H!P history, which is not something that we can say about Mano Erina. The difference is huge, and is seen like crazy in this performance. 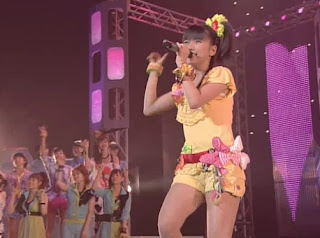 ManoEri gets REALLY pitchy here. Like, not a little; it was pretty easy for me to discern how off pitch she was. Her energy level was also not as strong as it could be, even though that’s the type of song this is. To me, I can tell she’s trying her best, but it’s just not there.
Basically, my final verdict is that if you are unfamiliar with the original version or ADORE ManoEri, you’ll probably like this; it’s a good song and ManoEri’s pretty cute. However, as a fan of the original and a fan of Ayaya’s, this just sounds like a poorly done knock-off; having a weak voice sing a song by the best voice of H!P’s history is not really the best idea ever.
On a separate note, this concert’s really making me dislike Momoko a lot. I know she has a ton of fans, but man, the way that she keeps dancing on the sidelines is just annoying as hell to me. There’s a difference between dancing/jumping along on the sidelines and doing what Momoko is doing, which is holding a fake microphone and going out of her way to draw attention to herself. Drawing attention to yourself is fine, but this is not the time/place for Momoko to do so, during a ManoEri performance.


This isn’t one of my favorite ManoEri songs ever, but I like it better than Onegai Dakara, so that’s good.

ManoEri’s voice is really not the best this concert, is it? It’s all over the place in this performance, even clashing with the background; are those just supporting vocals or are they doing the thing where they play the actual song in the back? All I know is that there’s some really iffy clashing of vocals here, and it’s not very pretty. Mano Erina’s not the worst vocalist H!P has to offer; far from it. However, it’s times like these where I have to wonder about her legitimacy as a soloist. 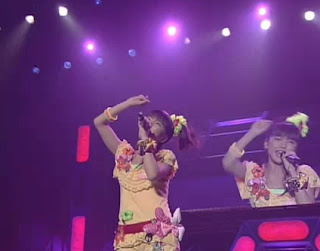 I mean, ManoEri’s not as bad a vocalist as H!P’s had, and she seems like a sweet girl. But I honestly don’t know what Tsunku/UFA found so compelling in her that they decided to make her the one soloist in H!P. Her vocals here are iffy at best and she never seems too energetic. Her performances thus far aren’t too compelling. She was fine back when she was in Gatas, but I don’t know how strong she is without a group to support her.
To her credit, she does get pretty fierce here and I can tell she’s getting into it, which is usually the thing I like most in idols. I don’t know; I guess if you’re her fan, you’ll like it, and if you don’t particularly care about ManoEri, like me, you’ll probably wonder why she’s a soloist, like me.