While I am a long-time idol fan, there are only a few artists whose work I will unconditionally purchase physically, mostly for financial reasons. I purchase most things digitally, if I can, and then I buy  releases if I really like them in particular. However, the one you might not know about is the amazing Rhymeberry.

I learned about them for last year’s Tokyo Idol Festival coverage, with the help of one of my idol fan friends who has been following them for longer. They’re a subgroup of Usa Usa Shoujo Club, however, Rhymeberry seems to be going the way of Babymetal, by releasing their own music separate from their main group. Rhymeberry also is like Babymetal, in that Rhymeberry does a genre of music generally not associated with idol acts. While Babymetal is a metal act, Rhymeberry does hip hop. Yes, Rhymeberry are rapping idols. 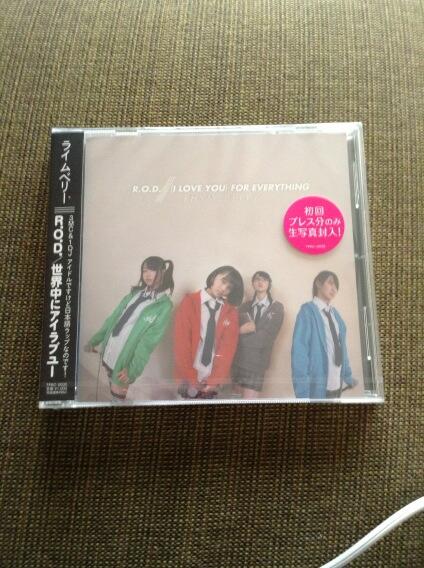 This is their second single, the first being the fantastic Hey! Brother, which contained three of their best songs, Hey! Brother, Rhymeberry iz No. 1 (a live version), and Ich Diebe Lich.  However, Rhymeberry has only recently started doing the two songs on this single, as opposed to including other songs they’ve been doing live for quite a while. So perhaps this indicates more music to come? I hope so!

Right off the bat this reminds me how much better Rhymeberry is live. That’s not to say they’re not good on a recorded track. They sound better here than they did in Hey! Brother, and have really upped their game in terms of rap ability. However, there’s a real energy to Rhymeberry lives that recorded tracks don’t have. When I crave listening Rhymeberry, I usually pull up one of my favorite performances, and I imagine I’ll do that with these tracks.

However, on the track you hear more, most likely due to the mixing. There’s a really interesting electronic countermelody (do you call it that when they’re rapping?) that I never heard live. I think the Rhymeberry vocals are mixed a little too quietly, but the electronic bits sound really nice, as does the beat of the song.  The other interesting bit is that when they chanted live “R. O. D. 3 MC 1DJ,” on the track it’s just an artificial/robotic voice doing it, with no Rhymeberry. It doesn’t sound bad (the robotic voice reminds me of something from the intro to Bill Nye the Science Guy, oddly enough), but I prefer the live version with Rhymeberry shouting.

Even though this is the first billed song on the single, Sekaichuu ni I Love You feels more like the traditional single song (even though it’s a really weird song in its own right). Here the only chorus is the robotic voice chanting “R.O.D.” This is probably the most heavily rap-focused Rhymeberry song yet, because it really is a great chance for the three girls to show off their skills. It’s not a very melodic song.

This is ultimately a really great song to separate Rhymeberry from all the other idol groups out there. While they’ve always been rap-based, this is VERY far from standard idol music. The Rhymeberry girls are really getting better, and I can’t wait to hear more!

2. Sekaichuu ni I Love You

I’ve never EVER heard a song like this. Which is why I love it.

While R.O.D. was heavily rap-focused and not very melodic at all, the backing music is, of all things, 30s-40s sounding jazz/swing music. I don’t follow rap other than Rhymeberry, but I can’t imagine many, if any, other hip hop songs have done this. This is a really interesting/unique combination that I really think sounds fantastic. This seems like the type of song that could be completely divisive and some could hate it while others love it. I’m firmly in the ‘love it’ camp.

The backing music sounds really fantastic, with lots of appropriate instrumentals. The song starts out with piano, but soon band instruments come in. I personally appreciate the great clarinet parts in the song, as a clarinet player myself. It’s unusual, but really fits the feel of the song (especially in the chorus parts).

The girls sound really great as well. There are some really fun lines they shout (Yuka mentions Han Solo at one point, and they shout “Dope the Shit” a few times (written in the lyrics booklet as “Dope the ****”). While this isn’t as intensive of a use of their skills as R.O.D was, they still sound really great, and I appreciate the brief spoken part by Hikaru (the DJ mentioned in R.O.D who DJs all the Rhymeberry concerts). The song also gets a bit more of a chance for expression rather than pure rapping skill; for example, Hime sounds really great in the way she raps the “kekkyoku dareka ni aisaretai” line.

Like I said, this is probably divisive. You’ll most likely want to listen to it a lot, or not at all. However, I think it’s fantastic, it’s creative, and something I’ve never heard before.

Overall: Another great effort by Rhymeberry, definitely upping their skills in the 9 months or so since Hey! Brother came out. While I preferred Sekaichuu ni I love You for its creativity, R.O.D is a very good track as well, both showing off how strong Rhymeberry is as a unit. This is very much recommended (dope the shit!)