Happy holidays, everyone! Since it’s almost Christmas for everyone and it’s the middle of the winter holiday season, I thought I’d make a list of my top ten winter/holiday/Christmas themed idol songs for Happy Disco.

I love Ayaya, don’t get me wrong, and I want to put this song on the list. However, the song has nothing to do with winter or Christmas. It’s here because the PV features Ayaya dancing in “winter clothes” in front of a Christmas tree, and it’s snowing outside. But 100kai no Kiss is a fantastic song no matter the season, and the PV’s also wonderful. 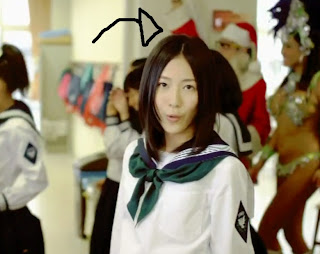 This song is not quite Christmas-y enough to make higher on the list; it’s in the name and there are some references to Christmas-related things, but the fact that this seems to take place in “manatsu” (midsummer) means it’s not quite the quintessential idol Christmas song.

Now this makes the list! I actually really like this song, despite putting it down at #9. However, to me it doesn’t really convey the spirit of the season properly. I realize that in Japan Christmas as a holiday is more about spending time with your significant other, but singing about how your heart hurts is not a way to get into the holiday spirit. Therefore, while this is a good song I’d argue, one of the better offerings from recent H!P, it’s not quite what I’m looking for on this list.

This also isn’t quite fitting to the spirit of the season. However, with happier lyrics than Aitai Lonely Christmas, at least it fits in a bit better. This is more about romance in the winter season than about the holidays, but it’s a catchy and addicting song that fits onto this list well.

This actually seems to be a bit more of a New Year’s song than a Christmas song, but it’s still a great song by one of the most underappreciated H!P groups of all time. Happy Winter!!!!

This is a beautiful song by the original generation of Tanpopo! I was happy when five of the current H!P girls did covers of it; granted, none of them quite did it justice (though I still bought Maimi’s off iTunes), it’s nice that classic Hello!Project songs are still remembered. This is more of a traditional-sounding song (with the title mentioning “holy bells”), but it’s still a great song.

For anyone who doesn’t follow AKB48 much, this song was a c/w song on the recent single, Chance no Junban. Now, at first I really didn’t like this song all that much; I thought it was slow and kind of boring. However, lately it’s really grown on me. It’s a sweet song about meeting someone on Christmas eve and the song and PV have pretty much everything; the bridge even contains the song Jingle Bells. The song’s slow and it isn’t really a normal, upbeat idol song but it’s sweet in its own right, as a little Christmas card from AKB48.

THIS is a more upbeat, Christmas-y song by AKB48’s Team K. At this point these Christmas songs have it all, and Christmas ga Ippai is no exception. The lyrics are very sweet and I do like how cute and upbeat the song is; it both makes it a better song and makes it more idol-y, which I always enjoy.

3. Oujisama to Yuki no Yoru- Tanpopo

This is probably my favorite song on this list, and it’s really a classic winter song for idol fans. As a song it definitely falls more into a winter than a holiday category and it’s really more about spending time with your sweetheart during the winter, but it’s a fantastic song, especially during this season.

2. Merry X’Mas to You- Matsuura Aya

This is actually not as known as a lot of the other songs on this list; it’s the B-side to Ayaya’s single ‘100kai no Kiss’ and I absolutely love this song. The lyrics are so simple (mostly just “Merry Christmas for you”) but it really shows off how beautiful Aya’s voice truly is; if anyone can pull this off in the idol world, it’s Ayaya. It’s a beautiful Christmas song that I think could easily go on any Christmas album. This might be an unknown to a lot of people, but to me it’s a keeper.

Could I really pick out any other song? It’s an H!P classic and it’s pure fun. The PV is just silly and the song itself isn’t serious at all, but it’s a fun, enjoyable Christmas song that is still a fan favorite.

Have a very happy holidays, Merry Christmas and have a wonderful winter season!!