Skip to primary content
It’s the third post I’ve made in a row! Wow!
Day 3: If you are a boy, who would be your girlfriend?

Now, obviously I could very easily say my idol favorite, Ishikawa Rika. I do think she would be the perfect girlfriend. She’s caring, funny, seems like a good person to be around, quirky, and the fact that she’s drop dead gorgeous doesn’t hurt.

How can one woman be so beautiful? It’s enough to give me a complex
However, IMO this is the easy way out. I mean, she’s my favorite idol ever, and if I was a boy I have no doubt in my mind that I’d go for the cuter/feminine girls. I mean, that’s my idol type. I tend to go for the girly-girls.
So, I was thinking “Hm, Rika’s too easy. Who else of my favorites would I like to go out with?” The highest girl on my ranking that I could think of is the AKB48 KKS Natori Wakana. 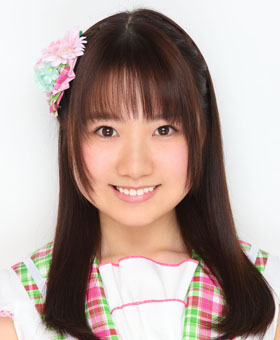 She’s cute, a fantastic singer, a really good performer, and is seriously brave. (Watch the 11th gen KKS special of Ariyoshi AKB Kyowaku (sp?); she picks up one snake, it bites her, and she picks the next one up) I LOVE Wakanyan so much, that even though I haven’t seen her in that much she’s my 3rd favorite idol ever (after Ishikawa Rika and Oota Aika).
However, I don’t know THAT  MUCH about Wakanyan. I know that I adore her, but she still hasn’t really gotten enough exposure to show her personality. Granted, I think she’s shown herself to be really cute and great, but would I want to date someone I didn’t know that much about?
That’s when it hit me. The girl I’d want to date so much if I was a Japanese boy and had any chance in hell with her. The choice was obvious! My choice of girlfriend would be the lovely Iwasa Misaki, AKA Wasamin. Now, Wasamin’s totally an underdog; she’s not a frontrunner in AKB at all, not making it to the top 40 in the senbatsu elections, and her only big promotion has been a DVD with Komori Mika as well as her stint in Watarirouka Hashiritai 7.
However, in the past six months or so I’ve gone from knowing next to nothing about her to being a huge Wasamin wota. Why? because she’s that fantastic.
The first place I knew of her was actually in my AKB Oshi Oota Aika’s birthday show. In that show, the message that was read for Lovetan’s birthday (by.. Sasshi, maybe? I forget) was by Wasamin, who said lovely things that ended up being something that further cemented Lovetan as my favorite. But even still, the sentiment was lovely and sincere, and I wanted to know more about her.
Wasamin really just seems to be this all around wonderful sweetheart. Many fans know her and love her for her voice, which is indeed fantastic. But to me, the things that have really endeared Wasamin to me have been her personality. She’s definitely not the outgoing type. However, she just seems to be one of the sweetest girls in all of AKB, with a lot of maturity. Also, one thing I’ve noticed is that even though she’s potentially one of the least popular girls in AKB, she always seems to be enthusiastic about the group. She also doesn’t try and conform to the group, and I mean that in a good way. How many idols actively sing enka in events, even though that’s not necessarily popular with wota? Enka’s not even my thing, and I’ve got to appreciate Wasamin going with what she likes.

I’m also completely charmed by Wasamin in this vid. She’s just such a sweetheart, it’s unbelievable.

So yes. Even though I gave it a lot of thought, I’d TOTALLY want Wasamin as a girlfriend, with both Rika and Wakanyan as 2nd place.